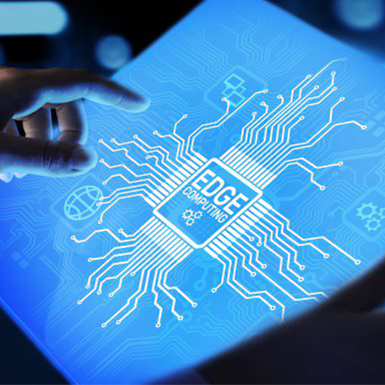 Edge Intelligence refers to a paradigm shift in computing in which certain data analysis processes are moved from centralised cloud or in-house data centers to the “edge” of the network. In such solutions, certain aspects of the analysis of the data and derivation and communication of insights, takes place at the site where the data is generated. The benefits of this are many and can be exploited in several settings and thematic domains, fitting into a broader distributed computing model that enables higher performing systems

Carrying out intelligent analysis at the edge of the network allows for decisions to be taken locally by smart devices such as remote sensor systems, smart cameras, vehicles, wearables, robotics and beyond. This enables decisions to be made more rapidly and prevents unnecessary data transmission (and data packet loss on the way) to central sites for analysis, which can congest communications networks and drive up the associated costs of usage. In addition, retaining the derived data at the site of acquisition reduces security risks that could compromise the privacy of said data, as it is no longer being transmitted to other sites but instead being utilised locally. As such, solutions leveraging Edge Intelligence can be particularly useful in scenarios with cost constraints, expensive and/or bandwidth-constrained communications networks (such as the use of satellite communications in remote areas), stringent data security requirements, and those requiring high performance and rapid response times (low latency decision-making by the system itself).

The domains within which Edge Intelligence can be utilised are vast and span the following and beyond. Proposed solutions should focus on domains in which there are substantial benefits from Edge Intelligence combined with communications networks.

Edge Intelligence can be combined with smart camera technology and computer vision techniques to detect wrongdoing or malpractice in a range of environments. This could be detecting and reporting illegal logging activity or poaching in woodlands and conservation areas, respectively. It could be to identify general theft or violence at retail sites, sports venues, public transport hubs, sites containing valuable or dangerous contents and more. Edge Intelligence could provide benefits in emergency scenarios, if combined with UAV (Unmanned Aerial Vehicles) it could be used at disaster sites (such as those impacted by wildland fires, floods…) to scan and map buildings, structural damage and people requiring rescue and/or medical support. Conversely, it could be used to detect and react to the presence of drones at sites in which they are trespassing and causing disruption (such as airports). Additionally, Edge Intelligence could be used to identify people who are at risk in broader environments, such as those working in dangerous or high-risk environments that may have a sudden need for medical attention due to an accident; algorithms could be trained to identify precipitating factors and symptoms of onset, then implemented locally, triggering an alarm if things go awry.

Given the requirements on autonomous vehicles for real-time decision-making and up-to-date awareness of their local environment, Edge Intelligence likely has an important role to play in ensuring safe and efficient operations by way of supporting such vehicles in their actions, but also in supporting real-time traffic management decisions to optimise traffic flow based on real-time road utilization and demand. Robotics can be equipped with local intelligence to hasten decisions in high stakes environments such as those pertaining to CBRN (Chemical, Biological, Radiological, Nuclear) scenarios and broader extreme environments. They may also be leveraged in less critical settings such as in customer service, personal care, warehouse operations, agriculture and assembly lines.

Remote infrastructure stands to benefit from in-situ analysis of structural health and influential environmental data, this could be pertaining to bridges and buildings, railways and their surrounding environments, offshore structures (wind farms, oil rigs…) and cultural heritage sites. This could also apply to functionality monitoring of machinery and devices used in factories for manufacturing, construction sites, energy networks and further industrial sites. AR/VR could employ embedded intelligence to support workers on industrial sites such as offshore structures or facilities managers by carrying out automatic identification of faults and notifying and guiding the user within their visual field.1

Edge Intelligence can be embedded in smart wearables utilised by the fitness and health conscious and/or the vulnerable to track and notify users of the onset of problematic indicators or symptoms. It could aid smart hospitals in patient care by using embedded advanced analytics to rapidly pre-empt the onset of concerning signals specific to their condition. Edge Intelligence may be used in the media to automatically configure the settings of local smart cameras or those hosted on drones when recording new material for journalism, event streaming or otherwise. An edge-managed platform might be used to derive and analyse personalised data pertaining to athletes to support improvements in performance and avoid injury.

The above-mentioned topics speculate on possible applications of Edge Intelligence and they are by no means exhaustive. Exploration of further use-cases is encouraged; those that could be enabled by, and/or see significant benefit from, the utilization of Edge Intelligence deriving from the improvements in latency, cost and security of the overall system.

The opportunity to use space assets, eventually integrated with other technologies, for the above topics are many. Some (non-exhaustive) examples are listed hereafter.

Satellite Navigation may play a role in provision of positioning and/or timing data for the aforementioned use-cases. This could include georeferencing data derived from drones, wearables, autonomous vehicles or robotics, or mobile sensors. GNSS (Global Navigation Satellite System) receivers can also support systems reliant on precise timing data, by providing this derived from satellite. Said data could be leveraged by the Edge Intelligence solution or integrated into the broader solution and service.

Satellite Earth Observation could be integrated at the service level through provision of data pertaining to the environment such as meteorological, air quality, crop health, surface displacements, land and water parameters, heat signatures, and beyond.

WHAT WE LOOK FOR

Kick-Start activities explore the business opportunity and the technical viability of new applications and services that exploit one or more space assets (e.g. Satellite Communications, Satellite Navigation, Earth Observation, Human Space Flight Technology). This call for Kick-Start activities is dedicated to the theme ‘Edge Intelligence’, which means that the call is open to companies that intend to develop space-enabled applications and services relating to the aforementioned themes in this domain.

However, please note that, currently, Austria, Greece and Switzerland are not supporting Kick-Start activities at all. Germany, The Netherlands and the United Kingdom have opted out of supporting this particular Kick-Start initiative.

Applicants must inform the National Delegation of the country they are residing in to obtain a letter of authorisation allowing the funding of the proposed activity. Norway Contact details of each national delegate can be found here (http://business.esa.int/national-delegations).

Ireland, Luxembourg and Norway have pre-authorised this Kick-Start initiative and therefore companies residing in any of these Member States do not need to provide a letter of authorisation with their proposal submission.

Kick-Start activities are funded at 75% by the European Space Agency for a maximum of €60K per contract.

Webinars are scheduled for the following dates: