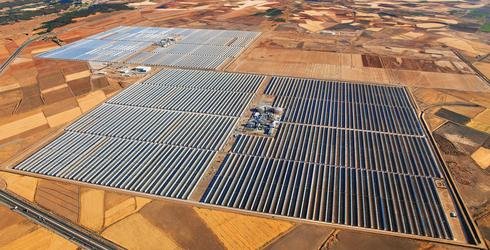 Did you know that the energy coming from the sun everyday and reaching the surface of the Earth is equivalent to 60,000 times the worldwide energy consumption per day? The potential of the sun to cover the worldâs electricity needs is immense, but it is not equally distributed, depending on the area of the globe and the meteorological conditions, whereas the areas with better solar resources are not always the largest electricity consumers.

As an example, Dr. Gerhard Knies, chairman of the Supervisory Board of the DESERTEC foundation, explains us:

- âWithin  6  hours, deserts  receive more  energy  from the  Sun than humankind consumes  within a  year. But how can this radiant energy be economically transformed into useful energy and transported to consumers?â

Even with this limitation, huge investments are made in solar transducer technology like photovoltaic panels, parabolic-through reflectors, solar towers etc.

In the short term, considering the current status of the technology, Concentrating Solar Power technology (CSP) based on parabolic through reflectors is seen as one of the clearest options for the future, as it allows the generation of electricity on large scales. Sunny regions of Europe are experiencing the deployment of the first of these power plants, supplying energy to their surrounding areas. Solar Millennium AG together with partners has developed, designed and realized Europeâs first CSP power plants, located in the region of AndalucÃ­a, near Granada, Spain, and they describe us their working principle:

- âThe technology is based on the concentration of direct solar radiation using parabolic-shaped mirrors.â says Benedikt PulvermÃ¼ller, project manager at Solar Millennium AG. The heat is collected in an absorber tube filled with a heat-transfer fluid.The heat is used to generate steam which is used to run a turbine and to produce electricity as in many other conventional power plants, like coal or gas. The rationale behind this approach is that heat can be easily stored and later used to generate additional steam, particularly during cloudy periods or even at nightâ

Andasol-1 was designed with a production capacity of 50 MW, allowing a maximum production up to 180 GWh per year. However, radiation received by the power plant is rather variable due to night, clouds or aerosols. In order to optimise the operation of the power plant and take the most out of it, a proper forecasting system is required. There it is where space technologies enter on stage. Data coming from Earth Observation satellites can be used to support standard weather forecasts and local measurement stations, while satellite telecommunications can make all the information from the satellites and the ground stations available in real time, which is a mandatory requirement for the operation of the power plant.

However, if the storage of heat allows the provision of a stable electricity output, why is it necessary to develop a forecasting system? Just because it is not enough to grant stability on a theoretical basis. Electricity grid and market operators have tight requirements of predictability over long periods of time. If renewable energies have to enter into real operation on massive scales, stability is an imperative to avoid a general collapse of the electricity distribution system. Additionally, it will allow the planning of maintenance operations in advance to meet the most appropriate conditions.

The service concept investigated within this activity is going to be tested in the Andasol-3 power plant, currently under construction.

-âIf the results are in line with our expectations, we will use the resulting forecasting service to improve the operations of other CSP projects we are developing around   the   world,â   says Benedikt PulvermÃ¼ller. âWe could  even start  providing these  forecasting services to other  CSP  or  Photovoltaic operatorsâ.

The CSP-FoSyS activity has just started its second phase, and it is run by Solar Millennium, a  company new to the space arena specialised in the development and construction of innovative technologies for solar thermal power plants. They are supported by DLR-DFD and ESA.