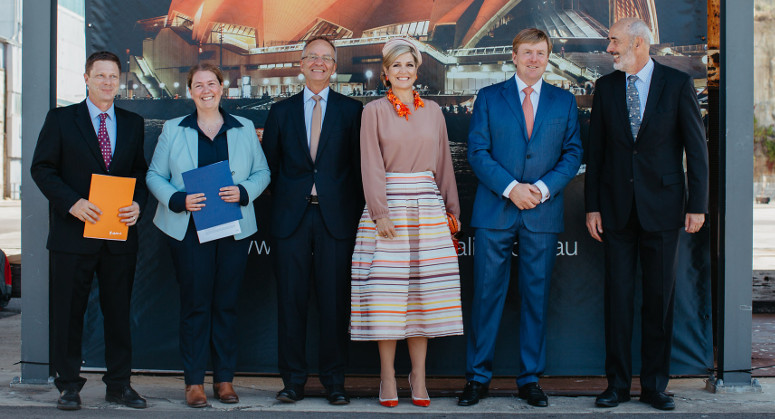 In the presence of King Willem-Alexander and Queen Máxima of the Netherlands, the HydroNET Water Control Room, part of the Smart Scanner for Water Resilient Cities, was officially inaugurated in Brisbane, Australia. The event took place during a five-day state visit to Australia by the Dutch royal couple.

Climate change forces major cities worldwide to deal with flooding because of more and intensive rainfall. In case of weather-related hazards such as floods or excessive rainfall, it can take insurance companies significant time and effort to complete the claim reports since they need to collect and combine a lot of data from different organisations before conclusive good decisions can be formulated. Easy access to the right information and automation of these data collection and data analysis processes can be hugely beneficial to improve data quality and availability, enhancing transparency in cause analysis and finally saving a lot of time and money.

WIth the support of the European Space Agency’s Integrated Applications Promotion (IAP) programme, the Dutch company HydroLogic developed the HydroNET Water Control Room. The system allows water professionals and insurance companies to access the required information quickly and easily and transforms weather and water data into valuable decision support information. The key service offered by the system is the Rain and Flood Report Generator which automatically collects the best available rainfall and flood data from crowdsourcing apps, gauges, radars and satellites for any specified location in the country. The report generator combines and translates this data into easy to understand rainfall and flood maps, graphs and tables and automatically generates Word documents containing all required information to support flood or rain analysis.

The Rain and Flood Report generator combines Earth Observation and geo-localisation services to provide the right knowledge and information for the insurance and water industry. Data from NOAA’s GOES Hydro Estimator are used to collect rain precipitation data in areas without access to station or radar data, and GNSS is used to determine the geo-location of the photos/videos captured via the EyeWitness crowd-sourcing app which also forms an important input for the flood or rain reports.

During a two-year demonstration project funded by ESA, the potential of the HydroNET Water Control Room has been proven. Australia was chosen as demonstration area because a large part of the country’s populated areas are poorly monitored. Moreover, around 7% of residential properties across Australia are exposed to frequent and predictable flooding, causing an average of $450 million in flood damage each year.

The HydroNET Water Control Room is part of the Smart Scanner for Water Resilient Cities, a set of tools developed by Deltares and HydroNET to support urban water managers taking the right decisions for effective water and floodrisk management as driver for building resilient cities and communities. For several years both parties have been successfully operating in Australia working in the fields of flood management and smart urban water management.

In the presence of the royal couple, Andrew McCowan and Steve Clark from the Australian consultancy Water Technology and Leanne Reichard from HydroLogic also signed a long-term agreement to establish HydroLogic's HydroNET Water Control Room in Australia. Water Technology will be the reseller and first point of contact for HydroNET in that country.

In addition to Australia, HydroLogic is also active in South Africa; In November 2015, the company signed a cooperation agreement with the South African Weather Service to deploy the HydroNET applications in that country.