San Javier Air Base (Murcia) was selected to conduct the trials and demonstrate that satellite communications are suitable to operate Remotely Piloted Aircraft Systems (RPASs) and integrate them into civil airspace.
DeSIRE Demonstration: RPAS used for the test flights 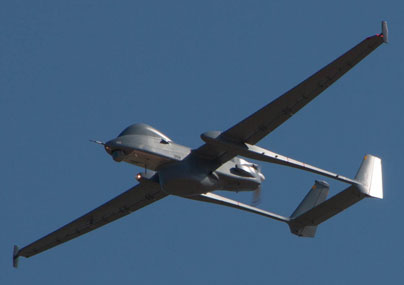 The DeSIRE project (Demonstration of Satellites enabling the Insertion of RPAS in Europe) is funded by the European Space Agency (ESA) and the European Defence Agency (EDA) within an initiative to support the utilisation of RPAS complemented by satellites for commercial and governmental applications.

DESIRE has undertaken a series of test flights to demonstrate the role of satellite communications for integrating in civil and military airspace RPAS flight Beyond Line of Sight (BLOS). The concepts and applicable procedures were defined in the precursor feasibility studies. In particular, the flight completed this Wednesday provided a generic terrestrial and maritime surveillance service, demonstrating the dual use of RPAS.

In the presence of the Chief of Staff of the Air Force, Francisco Javier García-Arnaiz, an aircraft without a pilot on board took off from the San Javier runway at 11:00 a.m. on Wednesday 24 April and completed a 6-hour flight in civil and military airspace. The operation was timed to coincide with civil and military flights operating from the base, which shares its facilities with Murcia Airport.

The RPA then climbed to 20,000 feet (6,096 m), entering airspace class C, managed by AENA, the Spanish Air Navigation Service Provider (ANSP), from Barcelona Control Centre. The pilot of the RPA, located at the Ground Control Station, followed all the indications issued by the AENA air traffic controllers, acting like any other civil or military aircraft. The difference is that the pilot was not on board and the radio communication with the control centre was transmitted from the aircraft to the operator via satellite.

During this phase of the flight, a manned aircraft from the Air Force Academy approached the RPA, simulating frontal and 90º collision trajectories. The pilots of the two aircraft followed the separation instructions issued by the air traffic controllers, demonstrating the safe operation of remotely piloted aircraft even in an emergency situation such as the separation of two aircrafts on a collision course.

Throughout the exercise, the data of SACTA, AENA's air traffic control system based on secondary radars, was available to the pilot of the RPA in the Ground Control Station, enabling him to improve the situational awareness of nearby aircrafts, with more details and precision than an on-board pilot would have. A radar located on board the RPA was also used to detect surrounding traffic and the data were transmitted to the pilot through the satellite link. The aim was to define and test the air traffic control and operation procedures applicable to a remotely piloted aircraft and to evaluate the safety of the satellite link and the reaction capacity of the aircraft's ground pilot, both in routine operation and in emergency situations.

During the flight, the payload data collected from the sensors on-board the aircraft (AIS receiver, radar and video) were transmitted in real-time to the Ground Control Station and further processed to enable ships’ detection and identification.

The execution of the project was possible thanks to the collaboration of the Spanish Air Force, which allowed the use of San Javier Air Academy facilities for the demonstration. Staff from the Air Force UAS School, sited in Matacan (Salamanca), supervised the operation of the RPA and San Javier military air controllers managed its take-offs and landings and its operations in military airspace. The RPA was granted an Airworthiness Experimental Certificate (AEC) by INTA to guarantee the safety of the system, under the envisaged operational conditions. AENA and AESA collaborated for the part of the flight to take place in civil class C airspace and the definition of the tests and of the applicable air traffic control and safety procedures.

The civil future of RPAs

The development of Remotely Piloted Aircrafts originated in a defence context. However, their utilisation for civil and security purposes has significant commercial potential.

The take up of RPAS exploitation for civil and security use would also enable the dual use logic to take full advantage of RPAS cost reduction.

Current legislation does not provide a harmonized framework in Europe for enabling RPAS to fly in civil airspace, in particular Beyond Line of Sight (BLOS). This situation is curbing their use and application in the civil sphere thus making it difficult for the European industry to develop the technologies and equipment that will make their use possible in the future. The demonstration undertaken within the DeSIRE project aims at establishing an agreed set of requirements that could serve as a basis for the future definition of the regulatory framework for RPAS Air Traffic Integration in Europe.

The DeSIRE project is part of the joint initiative undertaken by EDA and ESA, which follows a number of activities and projects initiated by the two agencies in the RPAS domain. Among these, the Air4All Study and MIDCAS project managed by EDA and the SINUE and ESPRIT studies managed by ESA.