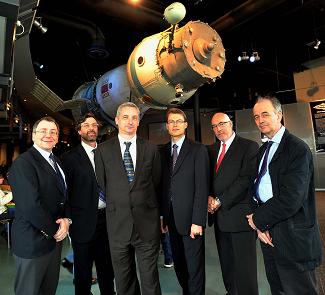 As part of the iFestival (one of the largest innovation festivals in the UK), ESA-IAP participated in an event bringing together local businesses in the Leicester region with the three local universities of Leicester, De Montfort and Loughborough. The ESA representatives presented the IAP programme, using IAP projects as case studies to illustrate how space-based services can meet a huge range of user needs, across many different industry sectors.

The three local universities each presented a variety of technologies that have arisen from their work in the space domain but which are being transferred into down-to-earth products and services. Many of them are world-leading, reflecting the enormous concentration of space-related expertise that exists in the East Midlands region. More than 70 delegates attended the event, which was held against the backdrop of the UK National Space Centre, culminating in a viewing of the highly successful, full-dome planetarium show, âWe are Astronomersâ, which was developed at the centre by the NSC Creative Team. The previous day, a smaller workshop focused on applications in the realm of Intelligent Transport, with an audience comprised of representatives of the city council along with academics, business development and technology transfer staff from the three universities in the area. This was hosted by the University of Leicester and was led by the ESA representative Dr Stefan Gustafsson (from the Integrated and Telecommunications related Applications Department, ESTEC) and Alan Brunstrom (Manager of the Ambassador Portal for Enhanced Mobility, based at the new ESA Centre in Harwell).