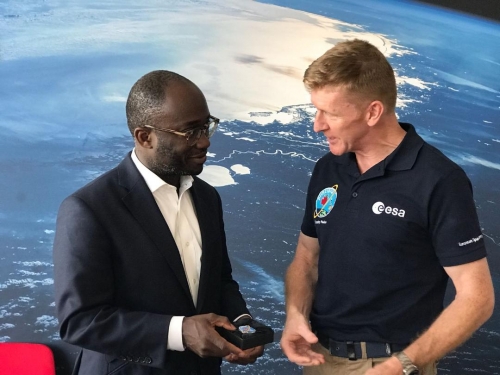 During his visit the Minister announced the new Mars rover planned to be designed in Stevenage by Airbus following the award of a £3.9 million contract by ESA. He said,  “This remarkable new project, which will see samples brought back from Mars to Earth for the first time ever, demonstrates Britain’s world-leading scientific and engineering innovation.”

The Minister also visited the UK’s national satellite test facility, across the road from ECSAT, where he and Tim Peake met with six companies that are developing cutting-edge products and services with the support of ESA and UKSA. Between them, MDA, Oxford Space Systems, Rezatec, Neptec, Lockheed Martin and Deimos represent both the upstream and downstream parts of the space sector and are a cross-section of more than 80 space-related companies within the fast-growing Harwell space cluster.

Tim Peake said: “It’s the dawn of an exciting new era where businesses and space agencies are working closer than ever before on ambitious missions to explore our solar system and deliver real benefits to people’s lives. I’m excited to see what the future holds for collaborations between the UK and ESA, which will see us reach for the Moon, Mars and beyond, whilst applying the resulting knowledge and technology back here on earth, in areas such as human health.”

The visit also marked the 70th anniversary of the NHS, with which ESA and UKSA have launched a competition with up to four million available to search for high-tech solutions that apply space technology to healthcare.