Currently more people live in urban areas than ever before and since 2007, the global urban population exceeds the global rural population. It is expected that the global urban population will grow further from the current 54% to 66% in 2050. At the same time these growing urban areas are vulnerable to the effects of climate change. Urban climate change related risks are increasing, including: rising sea levels and storm surges, heat stress, extreme precipitation, flooding, landslides, drought, increased aridity, water scarcity and air pollution. These increasing risks have a negative impact on local and national economies, ecosystems and people.

The feasibility study was performed by a consortium of Arcadis, S[&]T and KNMI (Royal Netherlands Meteorological Institute) in collaboration with three major European cities: Amsterdam, Athens and Lyon.

In a demand driven development, the three partner cities provided their requirements for the Air Quality Dashboard. This was translated into a design resulting in an operational Proof of Concept (POC) of the AIR-Portal. The technical and scientific feasibility of this POC were evaluated. In a second round of workshops, the partner cities reviewed the POC and input was gathered for a business case to study the economic feasibility.

The successful development of the POC showed the technical feasibility of the AIR-Portal. The study also tested whether the Air Quality Model produced valid results by comparing the output to data coming from air quality measurement stations. The Air Quality Model is capable of predicting an hourly air quality (for up to three days ahead) on a spatial higher resolution than the coarser input data. For a next phase improvements to the model need to be made (e.g. by including real-time traffic and weather information).

The Business Case resulted in a positive outcome and therefore the AIR-Portal is economically feasible.

Exploring the needs, wishes and demands of the potential users of the Air Quality Dashboard was part of the study. This resulted in a set of user requirements describing a dashboard for authorities and a dashboard for citizens. The targeted users are municipalities larger than 100,000 citizens within Europe.

In this study both the feasibility of the underlying Air Quality Model and the Air Quality Dashboard were examined.

The Air Quality Model uses satellite Earth Observations, land use and local monitoring data to predict the air quality on street level for a period of three days ahead with intervals of one hour. Low cost dust sensors were also investigated (crowdsourcing possibilities), but they did not provide useful data for the Air Quality Dashboard.

The figure below shows a screenshot of the Air Quality Dashboard. This examples shows a map of the NO2 concentration in Amsterdam (main part of screen), as well as a general air quality number in a location selected by the user, with associated advice (top right). 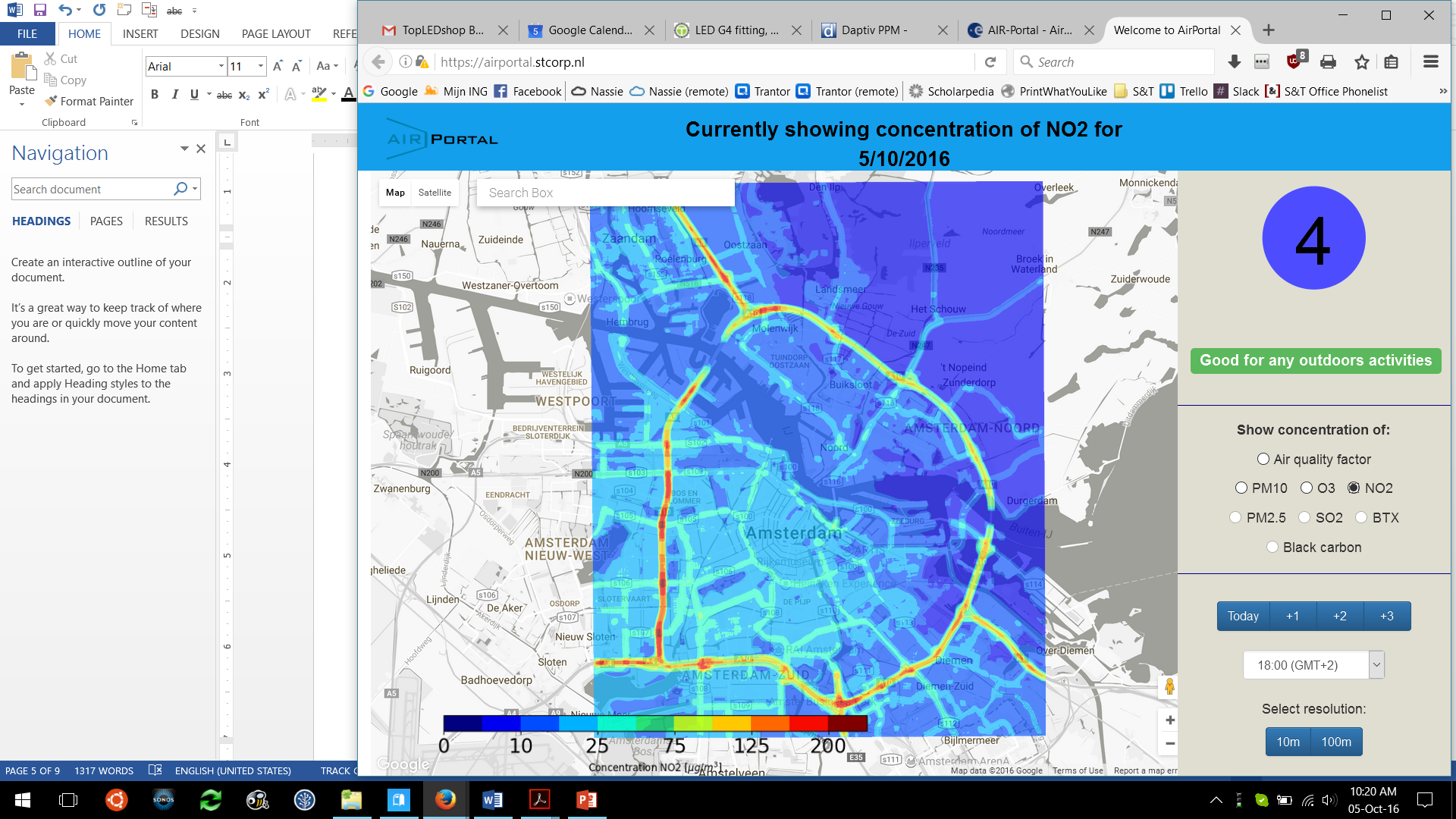 Visualization of the different levels of data which are used: 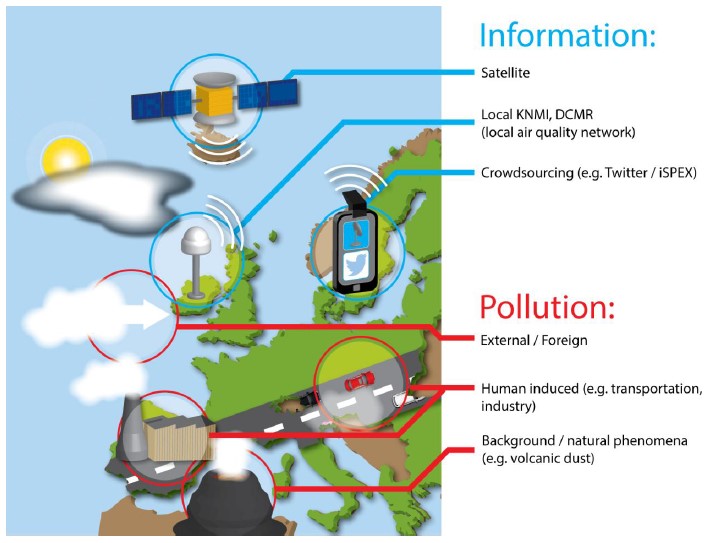 Example of the low-cost sensor developed for the project: 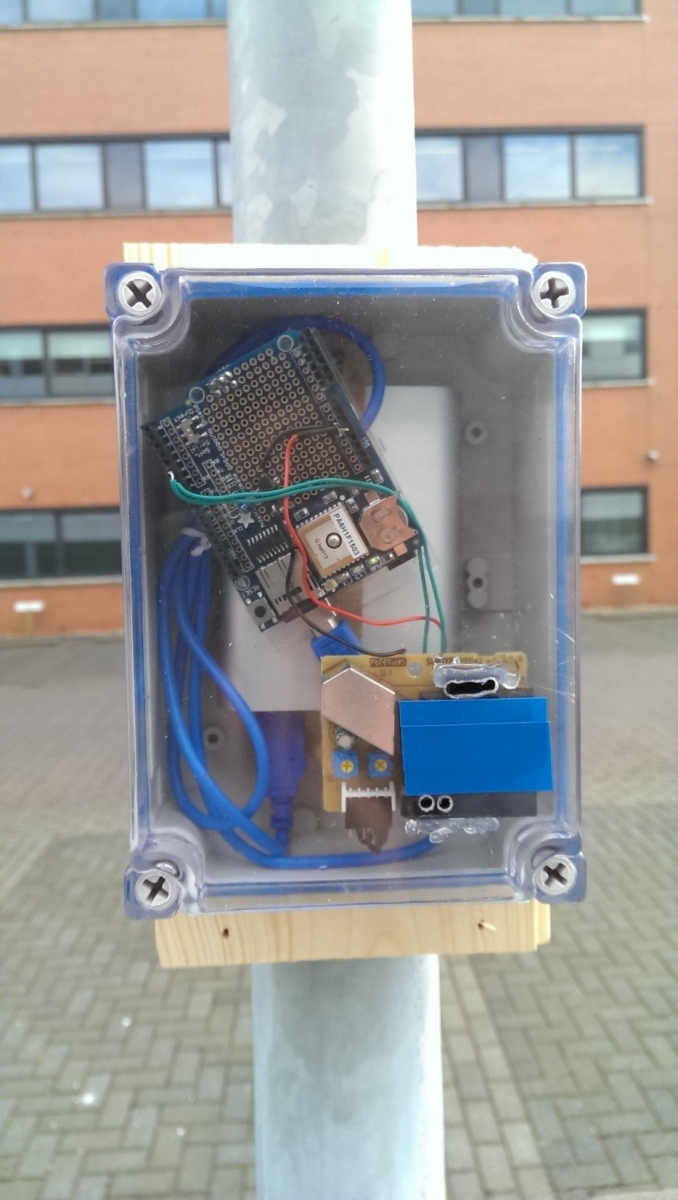 The following space assets are used in the proposed solution:

- GNSS: important part of the end-user application giving location. Furthermore, this can be used to locate sensors if they are placed on moving objects, e.g. busses or taxi’s

The project had its successful final review in September 2016.