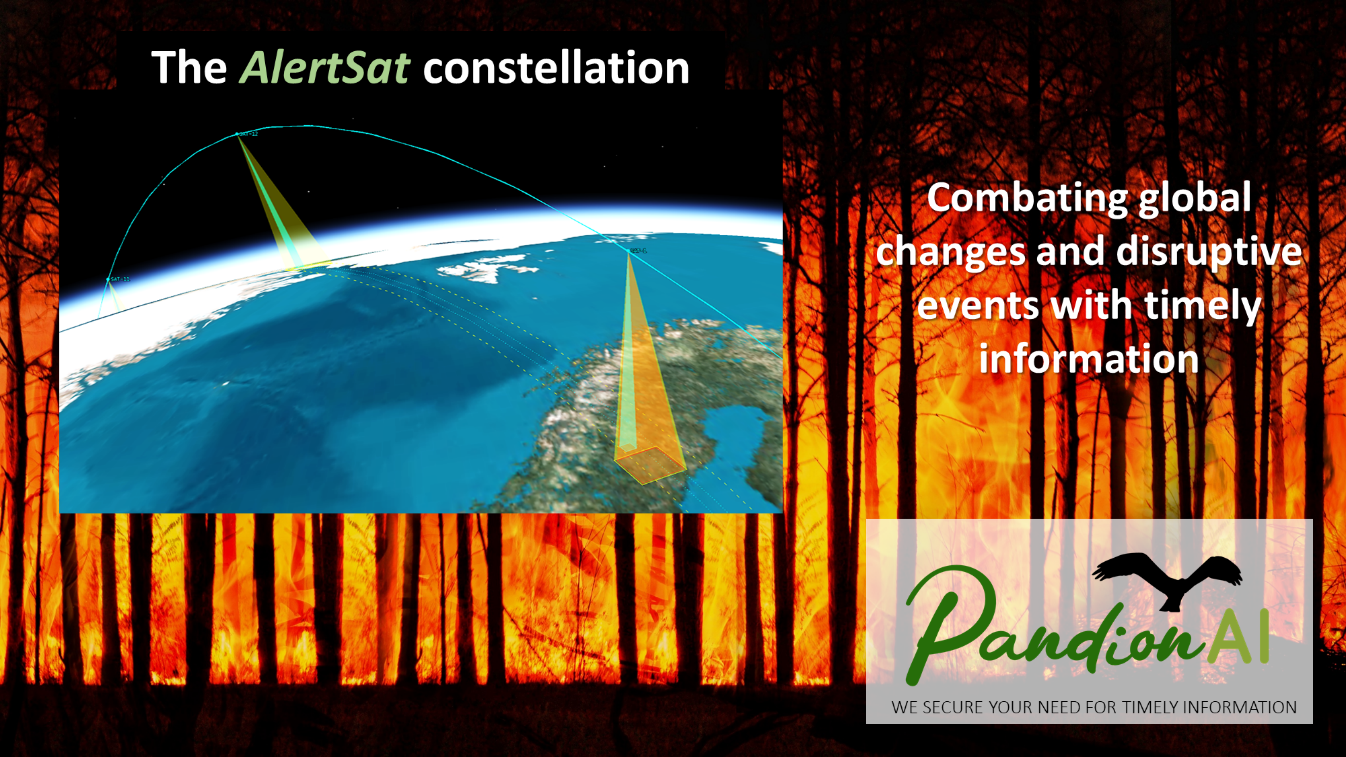 In the globalized world of today, we all can see how global environmental changes are creating disruptive chains of events. Politics, environment, and business processes are all closely interlinked and affect each other in an unforeseen way. Forest wildfires extending into urban areas, expansive flooding into IT-suppliers facility areas, and uncontrolled global spreading of pandemic diseases that shut down whole societies are just a few emergency examples. This requires up-to-date and rapid information sources for efficient and credible decision-making.

The AlertSat satellite constellation gives personnel engaged in combating emergencies, and other hasty or dangerous events, critical information of high operational value downloaded directly to the responsible and active staff. The information in the form of quick alerts highlights only relevant changes in time to be operational as requested by the end-users.

The AlertSat constellation is designed to address these challenges and to produce flexible alert services adapted to the customers’ requirements and needs. This is made possible by on-orbit image processing and AI-based change detection interpretation. In combination with an adaptive User Interface for tasking and delivery of the alerts, this will provide reduced lead times, lower complexity in information handling, well-integrated services, and higher performance.

The common denominator for the AlertSat targeted user communities is their demand for rapid location-based information of the terrain during emergencies or sudden events with visible changes on the ground. The customers are responsible for managing high-value assets in vast or remote areas and need support for their decision-making. These requirements are common within several global market segments such as Emergency and Security, Infrastructures, Energy productions, Industrial plant logistics, Forestry, Environmental control, Insurance services, and Business intelligence.

Two stakeholders from the governmental side and the commercial arena have been engaged during the study to represent the customers. The Swedish Civil Contingencies Agency responsible for supporting society to prepare for emergencies and environmental accidents. The Tyréns company as one of Sweden’s leading consultancies working with sustainable solutions in the fields of urban development and infrastructure.

A global earth observation system that delivers up-to-date and customized data directly down to the end-users, who are in operational need of the change detection information, significantly reduces the workload for the staff of these organizations. Furthermore, if this information has low latency, and comes in a format adapted to the end-user’s command and control system, this saves time, money, and even lives.

A forest wildfire fighting use-case in an inhabited forest area in northern Europe explains how the AlertSat works. The end-user of the information is a local firefighter team responsible to cover a large remote area of several thousand km2 of forest terrain 24/7 during the summer month.

The alert service asked for is to detect new small flare-up wildfires as early as possible. The product, or the alerts, delivered directly to the end-users by AlertSat consists of e-mails or text messages to the chief operating officer’s smartphone giving position, extent, wind direction, time of detection of all new wildfires. The alerts are simultaneously forwarded to staff nearby the fires and an airborne unit for further actions.

The time from the start of the fire to the detection is of major concern for these customers. The longer the forest burns, the greater is the economic and social value of what burns up, and a higher cost for the firefighting. That is, early detection and the ability to act fast will save both suffering and money. The focus for the AlertSat services will be as close as possible to the event that triggers the crisis, as shown in the figure below.

The AlertSat services are based on a wholly owned and of PandionAI AB fully controlled satellite system. The AlertSat concept consists of a constellation of interacting smaller optical earth observation satellites, designed and developed by PandionAI AB, where an on-orbit image change detection interpretation and fast delivery of crucial information is the main customer value. The development of the AlertSat services includes the entire information chain and all space assets needed to produce the services.

Earth observation satellites in general are perfect tools for environmental monitoring and emergency evaluation. The coverage from satellites is a global information source that detects critical details in the terrain, and satellite systems are on constant alert for monitoring 24/7. However, the value of information, especially in emergency situations, depends on how fast it can be delivered and how unusual it is. Obtaining unique knowledge before others have access to the same information has a high value and can at best prevent disasters. The concept of AlertSat is focused on this specific added value and bypasses existing EO satellite systems by a disruptive service value chain as is shown in the figure below. 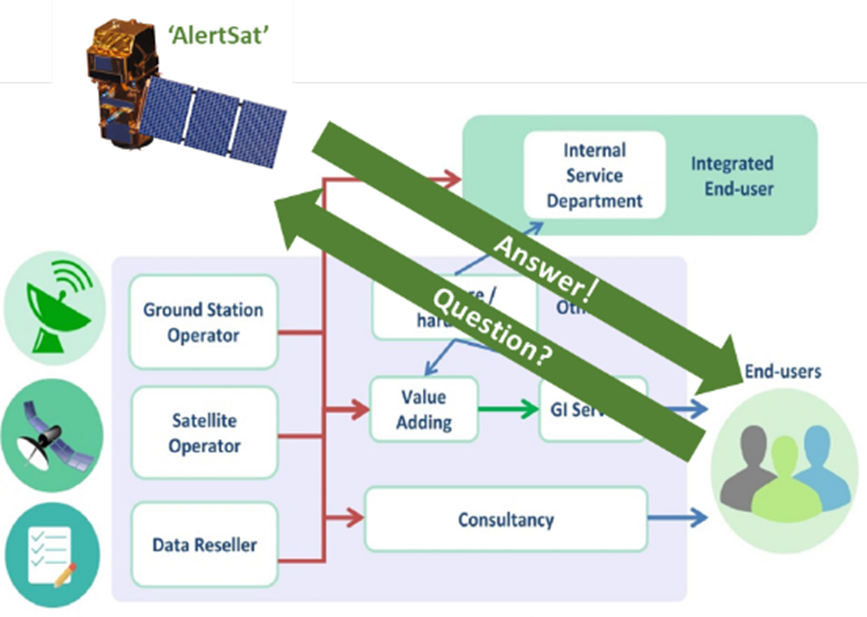 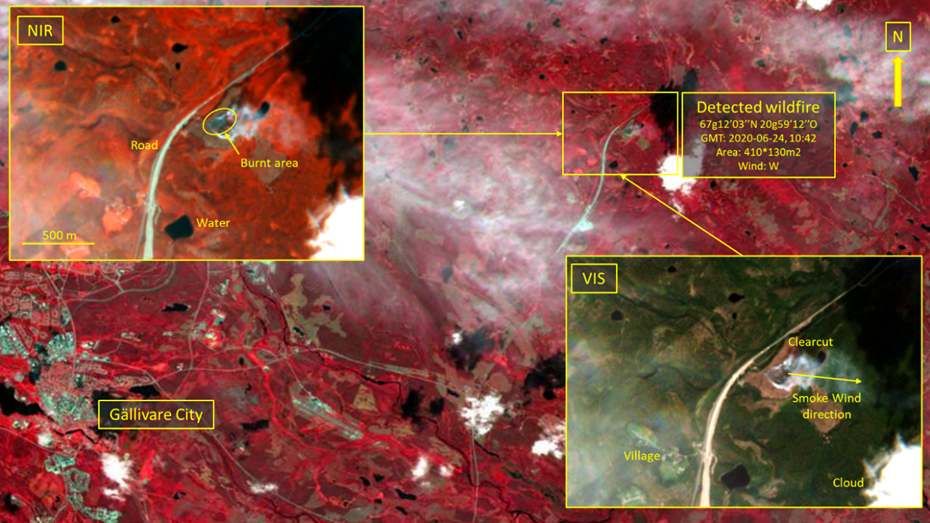 A dialogue to present the AlertSat concept is initiated with end-users. Feedback from this has resulted in important changes to suggested services and the mission design. A use-case analysis is performed to understand customer's requirements and competing EO-companies’ solutions. It is concluded that PandionAI has a value proposition that addresses an existing market.

The conceptual AlertSat idea is elevated to a draft potential design. Technical aspects are taken into consideration together with the user’s requirements to evaluate the chosen design. It is concluded that several of the core EO segments needed, and several satellite components, are either existing products on the market ready for delivery or will be in short.

The initial ‘top-down’ market assessment indicates that the market size of the chosen segments is large enough to justify PandionAI's development costs. Altogether, setting up a new EO-service for fast change detection of critical information is both technically possible and financially feasible.