GreenBone Ortho S.p.A. developed and manufactured an innovative bone substitute, called “b.Bone”, with a unique technology. Objective of the study is to validate b.Bone scaffold, already used in orthopaedic and traumatology surgeries, in osteoporotic environment to improve human bone surgery.

b.Bone derived from Rattan wood, a plant that grows in southeast Asia. Rattan has a 3D structure which is very similar to human bone, that includes, like real bone, pores and tunnel-like cavities of different sizes. Using a patented process called “biomorphic transformation”, wood is transformed in hydroxyapatite which is the major component of human bones, and the original 3D structure from wood is maintained during the process. The obtained scaffold is a highly biomimetic and bioactive ceramic resorbable bone substitute. b.Bone has the capacity to regenerate portions of bone.  b.Bone is indicated in the treatment of surgically created osseous defects or osseous defects resulting from traumatic injury to bones of the skeletal system (e.g. extremities, including arms and legs, and pelvis).

To validate the use of the b.Bone scaffold in osteoporotic environment, the scaffold is seeded in vitro with human bone cells in simulated microgravity and then in space (after the current activity), to simulate an osteoporotic accelerated model, and their response is analysed.

Focusing on patients with osteoporosis, they are suffering from a chronic disease characterized by alterations in the bone structure resulting in reduced resistance to mechanical load and increased risk of fractures. Osteoporosis is an important, social and economic health problem especially of women of today's world. It is estimated that in Italy 1 in 3 women over the age of 50 (about 5,000,000 people) and 1 in 8 males over 60 years (about 1,000,000 people) are affected by this disease. Unfortunately, even today less than 50% of patients at high risk of fractures are treated with anti-osteoporotic drugs with significant social consequences in relation to complications and outcomes of fracturing events. On the market, there is no bone substitute with a specific indication and claims for the treatment of osteoporotic patients. The possibility to treat osteoporotic fractures with a regenerative material devoid of limitation for osteoporotic patient market segment is expected to boost the market potential of the product.

At the moment b.Bone is marketed only in Italy, it is a CE marked product and it is ready to be distributed in Europe. In the next few years the marketing of b.Bone will be expanded to almost all European countries.

At the end of this study, b.Bone will be able to claim a possible use also on ostoporotic patients, and this is a specific indication which is not claimed in any of the scaffolds currently in the market. This study would aimed to offer substantial improvements in the treatment of osteoporosis for patients, and consequently it would allow to expand the market of b.Bone.

The aim of the study is the setup of a 3D in vitro b.Bone model using human cells determining the optimal cell number for each cell type to be seeded on b.Bone. Cell integration into the scaffold is studied with vitality and proliferation assays. The cells are stimulated with osteogenic medium to induce cell differentiation. Furthermore, RNAseq analysis is performed to have a complete overview at the molecular level of the coding and non-coding RNAs expressed by the all the cell types in cultures. Histological staining and immunohistochemistry analyses allow the team to study cell integration and extracellular matrix deposition into the complex microarchitecture of the b.Bone scaffold. Cell-cell and cell-matrix interactions in the scaffold are characterized by SEM/TEM as well as collagen fibers structure. Then the experiment is set up in CO2-free culture conditions because both in space and simulated microgravity the supply of CO2 to the cultures, routinely used in lab to control culture medium pH, will not be possible. The last step of the in vitro experiment is the set up using the Kayser Italia Sphinx bioreactors for the space flight. Therefore, the team need to use specific inserts to hold in vitro b.Bone within the bioreactor chambers and verify that the culture in the bioreactors is not negatively affected by the medium flow speed used during the experiment.

Bone loss occurs very rapidly in microgravity, which allows to create an osteoporotic accelerated model. Bone loss is actually one of the major problems for astronauts to overcome during extended stays in space microgravity. In fact, astronauts lose on average 1% to 2% of their bone mineral density every month. To avoid these issues, crew members are forced to do physical exercise for two and a half hours a day, six times a week (fifteen hours a week) while in orbit. The microgravity environment provides a greatly reduced mechanical loading compared to ground to bone cells, that causes loss of bone mass and strength, which, in turn, leads to osteopenia and eventually osteoporosis.

For this reason, the possibility to conduct experiments in microgravity conditions gives a unique opportunity to induce a quick pro-osteoporotic environment to study bone physiology and pathology. In particular, the microgravity induced osteoporotic model allows the team to study the interaction between cells and b.Bone. This results may determine the adequacy of b.Bone for the treatment of osteoporotic patients of in human surgery.

The study is started on March 1st, 2022. At the moment the correct module has been identified to house the b.Bone scaffold and will be able to bring b.Bone to the space station. In vitro studies are underway to identify the correct parameters for cell culture inside the space module (dimension of the scaffold, number of cells, days of cell culture, medium flow speed). At the end of this work, in vitro tests on the ground will be carried out to see the behaviour of b.Bone under normal conditions, to be compared with the data deriving from the experiments in orbit. 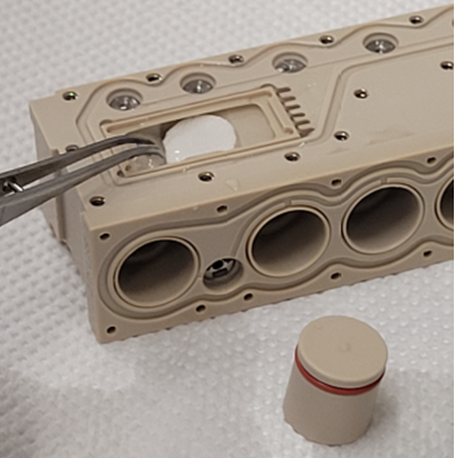