Current routing and mapping technology is not optimised for the needs of cyclists. At a macro level the impact is less people choosing to cycle which has a negative impact on health, congestion and pollution.

The objective of the project is to demonstrate a routing and mapping service optimised for the needs of cyclists (be it speed, safety, pleasantness etc) and to validate that it is deemed better than the existing provisions.

There are three target user groups for this project:

For each of these groups we have users who are involved in shaping the solution:

The needs of these users (for the whole navigation system, not just the routing) are as below:

The system allows a user to plan a cycling route on a map and modify the parameters for which they want to optimise (e.g. speed vs safety). The user is then guided along that route using the intuitive interface of the Beeline hardware device (or a simulator or another device).

The below diagram shows how the various parts of the system interact with each other. A wide range of datasets (proprietary or external) are used as inputs to the routing engine which is the focus of this project. The user inputs a destination via the smartphone app and the start location is known from the smartphones’s GPS unit. A route is then requested from the Beeline routing engine and sent back to the smartphone which then controls the handlebar mounted Beeline hardware device in order to guide the user to their destination. 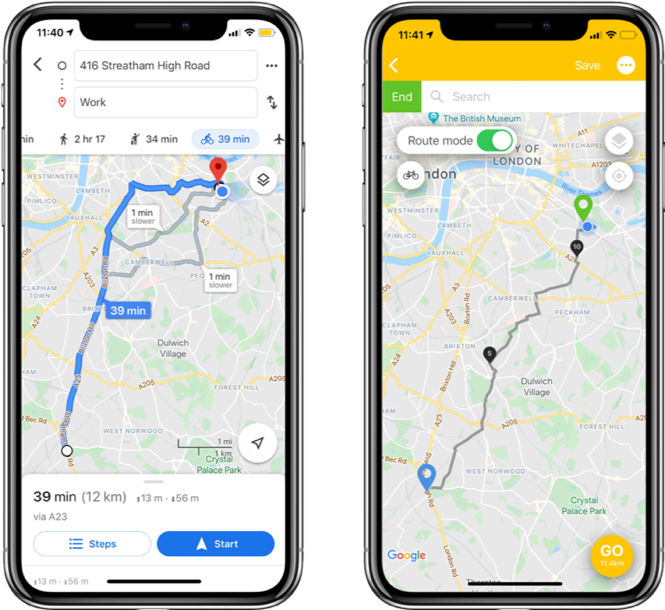 The below images demonstrate the Beeline product in use: 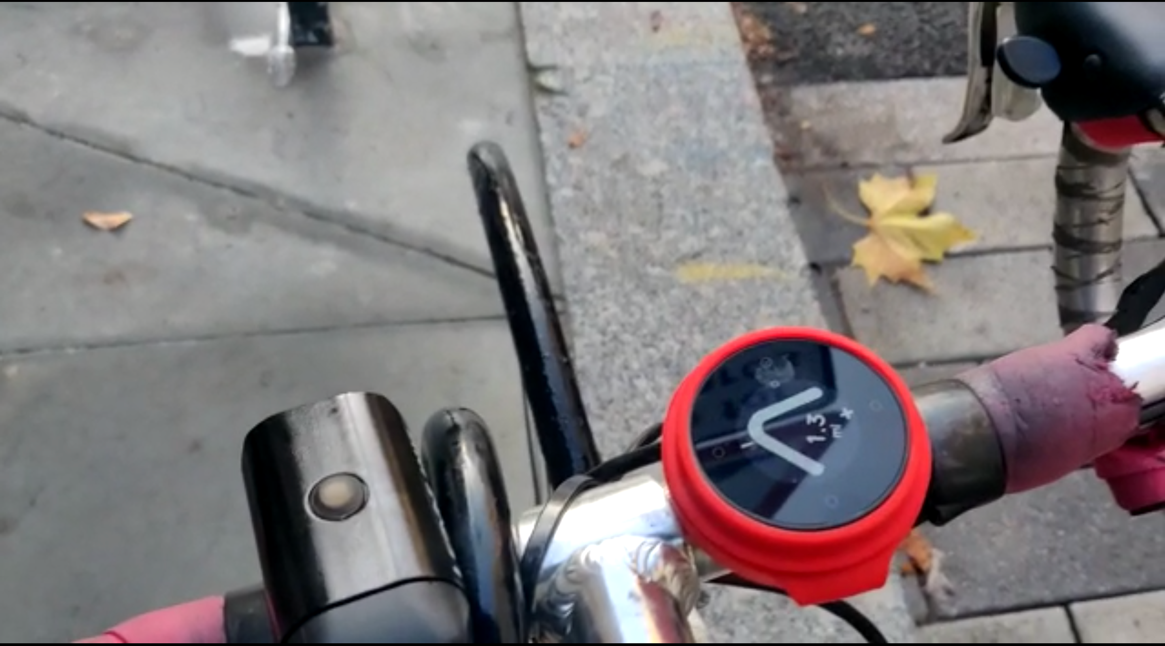 Figure 3: the Beeline device being used in navigation mode 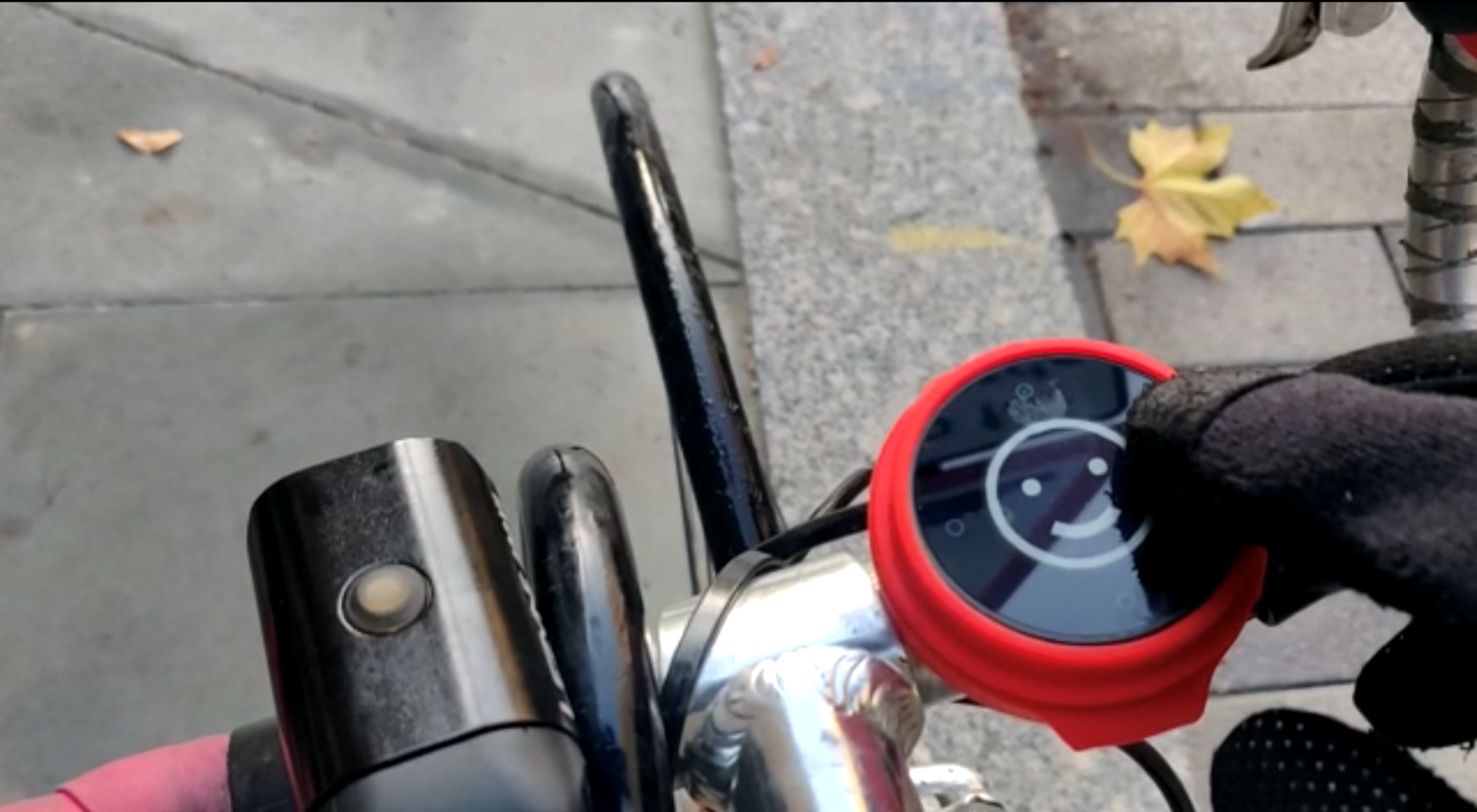 Figure 4: Pilot user tagging a street as 'good' through the Beeline device 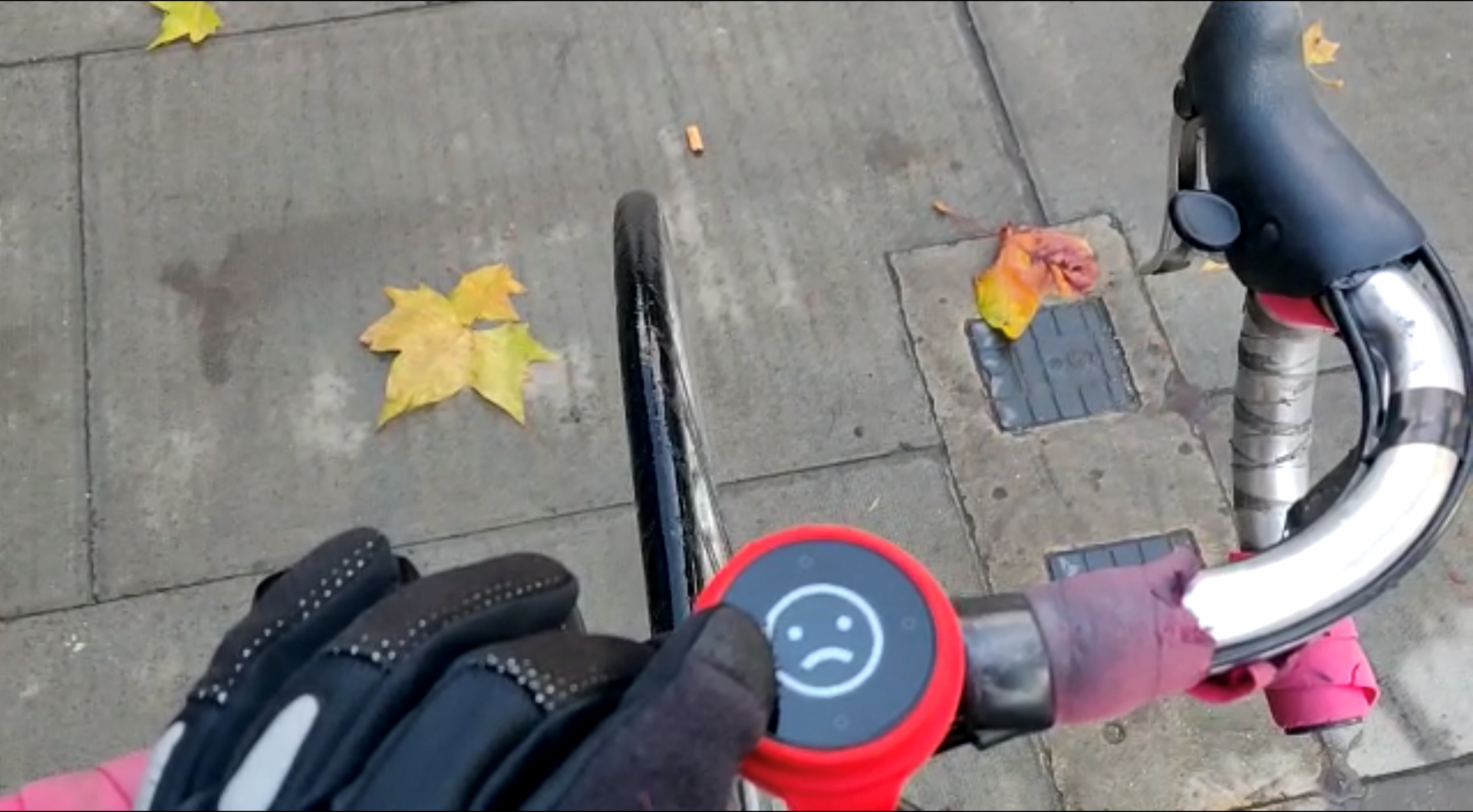 Figure 5: Pilot user tagging a street as 'bad' through the Beeline device 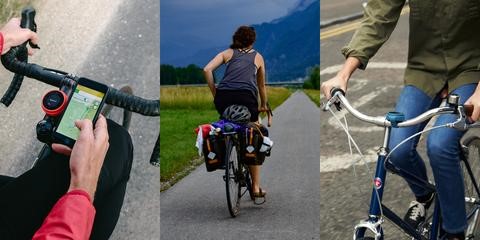 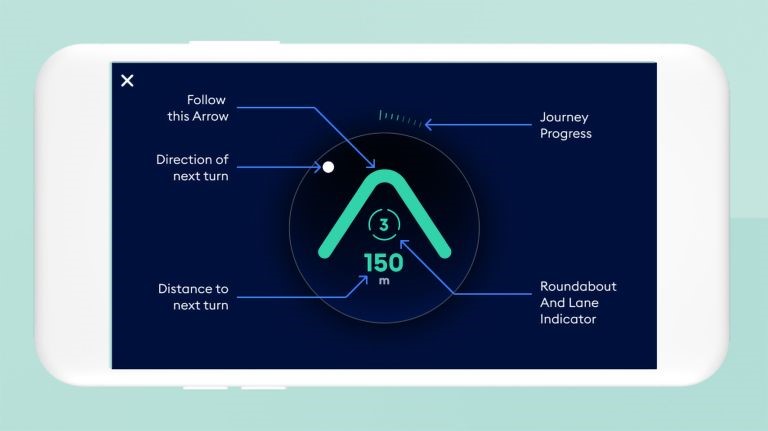 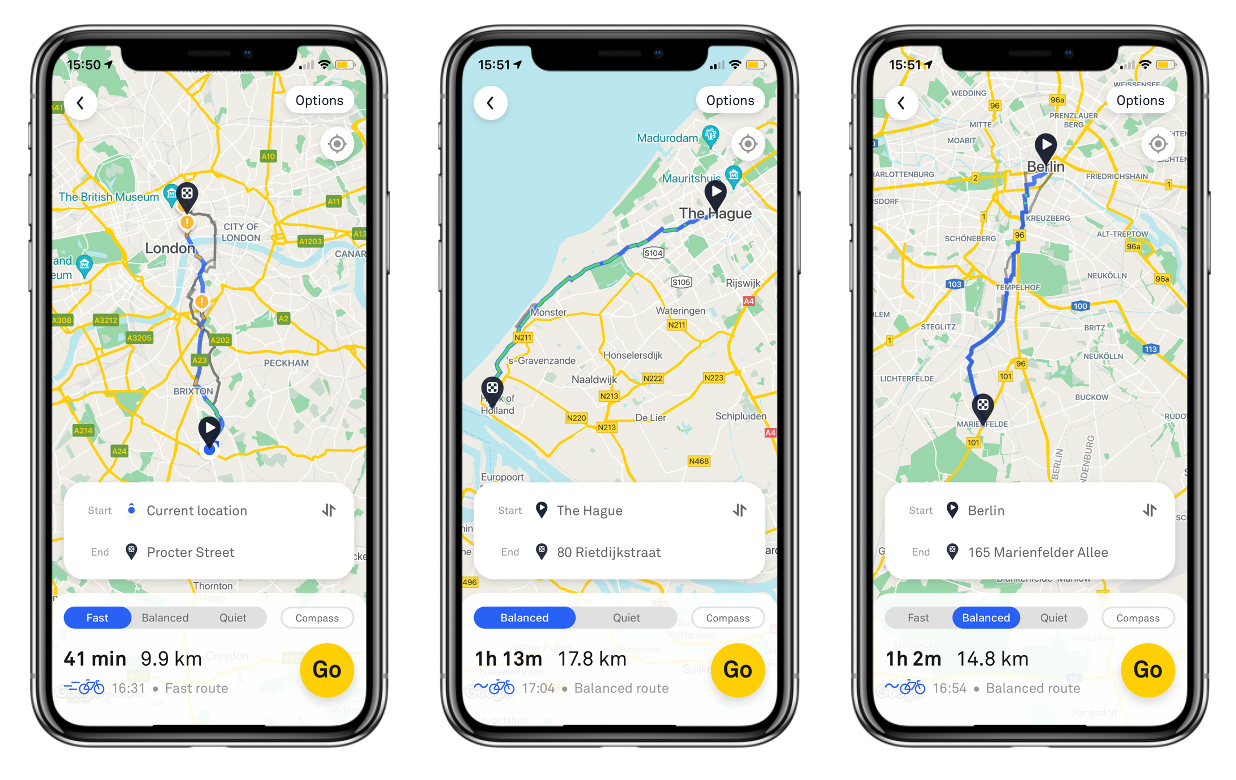 The space assets used are all geodata relating to features of the map. For example road type, surface quality, elevation, bus routes, traffic, cyclist speed and many more.

Some of these are openly available (e.g. elevation), some are obtainable through partners or at a cost (e.g. bus routes from TfL in London, traffic from commercial data providers). Others are proprietary data from our own user base (e.g. cyclist speed data and user input).

The way in which the proposed system adds value is in the manner in which it combines all of these various space assets to be able to mimic human intelligence by weighting them in the correct manner. In the same way a cyclist with detailed knowledge of an area will consider many factors (such as time, distance, safety, elevation) and make a balanced decision on which route to take, so the system will mimic this through the routing engine.

The below image is an output of a prototype in central London in which a safety rating has been calculated for each road by using a weighted blend of factors including distance, road size, bus route information, user rating, elevation, accident hotspots and several others. 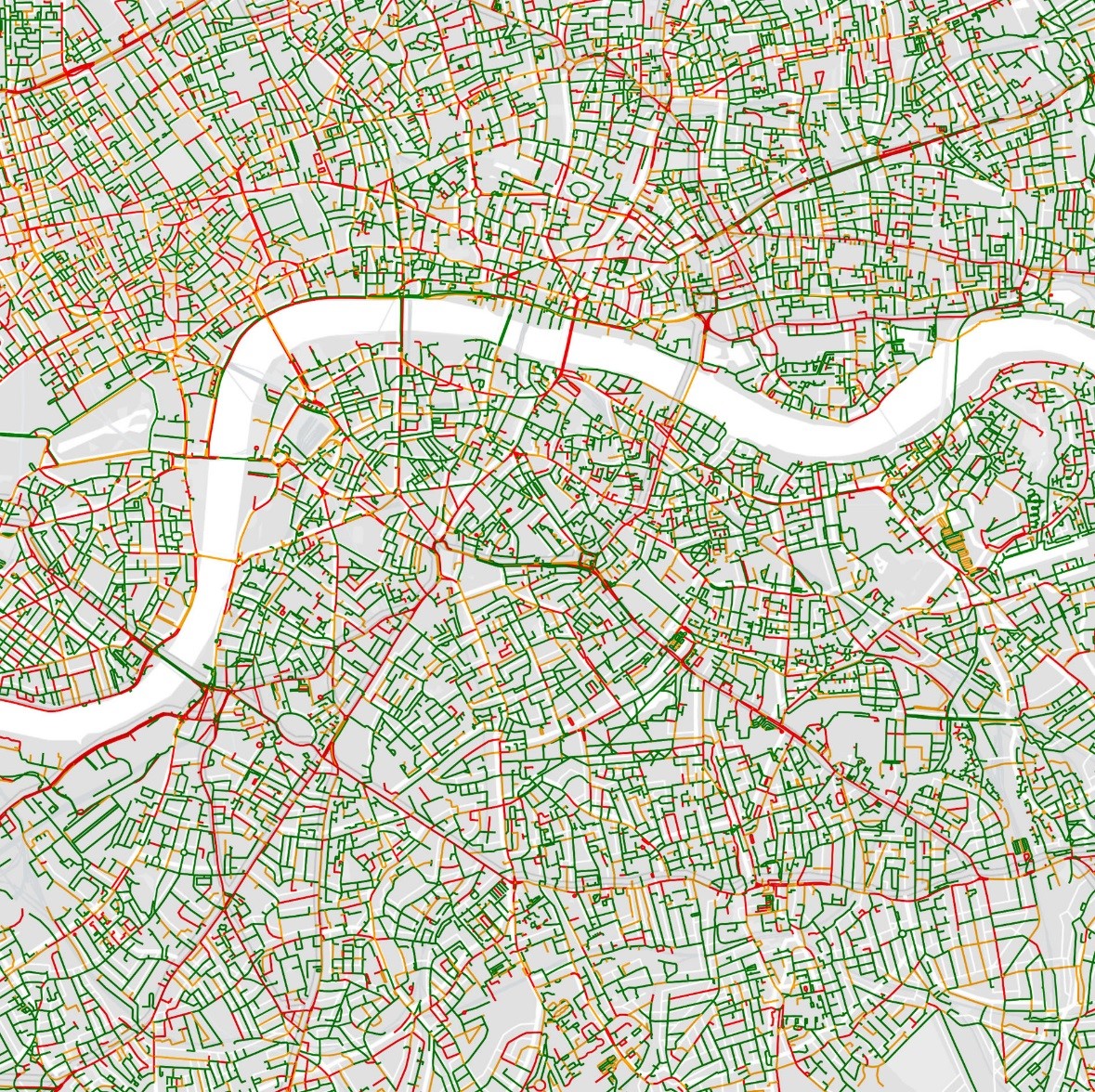 At the latest update in July 2021, the service has been demonstrated, been through successful pilot testing in the initial demonstration geography of London and has been launched across the UK, Germany, the Netherlands, Belgium and Luxembourg. Tests have shown Beeline routing to successfully guide users on roads rated better for cycling (by real cyclists) than Google. Our testing shows that Beeline sends users on 67% fewer “bad” rated roads than Google.

From a commercial standpoint, we have already seen strong traction, with two contracts signed with a major European micromobility operator to provide navigation services to their fleet, one of which is now live with integrated services running on Android across their UK fleet, with iOS and further European cities to be launched in the coming weeks. A second contract is taking longer than expected to come to fruition due to development delays on the customer’s end, We are also in developed conversations with others in this space. Part of the sales pitch which helped to win this contract and engages others was the routing service developed in this project.

Going forward, we will continue publicising the service across the UK and Europe and continue to roll out new countries, expanding our reach. In conjunction with the routing service we have been developing a new hardware product which is lower cost (aimed at mass market) than our existing cycling product and has user feedback and contribution to the routing service at it’s core. Finally, we intend to launch an app-only version of the service in 2022. These new launches will serve not only as a means of growth for our consumer business, but to also be the live showcase for selling more effectively into the B2B market.

In June 2020 we began an extension to the initial project to advance the technology through using a predictive modelling approach to give expected user feedback rating inputs to streets which do not yet have enough (or any) real user feedback. This will have several layers of benefit, from expanding the gap in quality service between Beeline and our competitors, building in more defensibility through deeper technology and through allowing more immediate expansion into new geographies. This has now been successfully developed and piloted at scale with nearly 3000 users across the UK and EU testing it over 20,000 rides. We have successfully built a predictive machine learning model which is able to predict the likelihood of any given street being rated as good or bad by a user from a given group (or cluster) and hence provide routes to suit their needs. This has been tested by clustering by geography. This is already incorporated into the live product being used across Europe by B2C and B2B customers.