COHABIT not only secures the safe and environmental friendly coexistence between big carnivore / omnivore animals and humans in wilderness areas but also fosters the interests of all involved actors, be it Wilderness Organisations and Parks for wildlife conservation, Visitors for safe wandering natural parks and Farmers for optimal protection of their livestock and crops.

COHABIT targets first wilderness areas in Europe and Africa and will expand later in the Americas and Asia. Countries such as Germany, Sweden, Czech Republic, Slovakia, Austria, Italia, Portugal, Romania, Ukraine in Europe and South Africa, Namibia, Botswana, Zimbabwe, Mozambique in Africa will be initially targeted.

The COHABIT environment and associated elements is illustrated below: 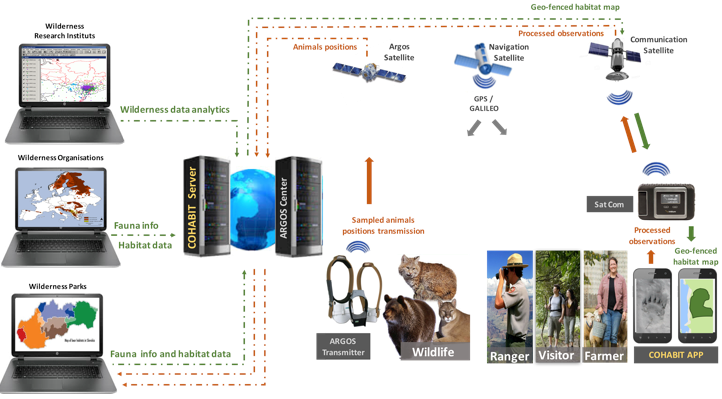 COHABIT will principally make use of 2 types of space assets as follows:

Observations and reporting of animal sightings, sounds and indices

Geo-localisation of visitors in wilderness areas

Sending processed visitors / rangers observations (animal sightings, sounds and indices) from the wilderness where no cell coverage is available

Earth observation is only used indirectly by the animals’ habitat sources available to the parks.

The COHABIT initial phase of a feasibility study has been achieved and finalised. The study has shown that COHABIT is conceptually, technically and commercially feasible, that it responds to the needs expressed by the participating actors.

The study has been carried out in close collaboration with the European Wilderness Society (EWS) and associated Parks and with the Luxembourg Institute of Science and Technology (LIST). It has enabled the collection of the COHABIT requirements and has highlighted the need to enhance the visitors’ safety in wilderness areas by limiting the probability of dangerous encounters with big wild animals, the need to have visitors become conservation agents by reporting their observations of big animals sightings, traces, indices and sounds, and the opportunity to help famers near or in wilderness areas to better protect their livestock and crops from large wild animals trespassing into their properties.

The COHABIT freemium business model, will enable a gradual familiarisation with the COHABIT APP by the visitors and farmers, thus eliminating any initial uptake barrier and securing over the medium term the needed revenues and commercial viability.