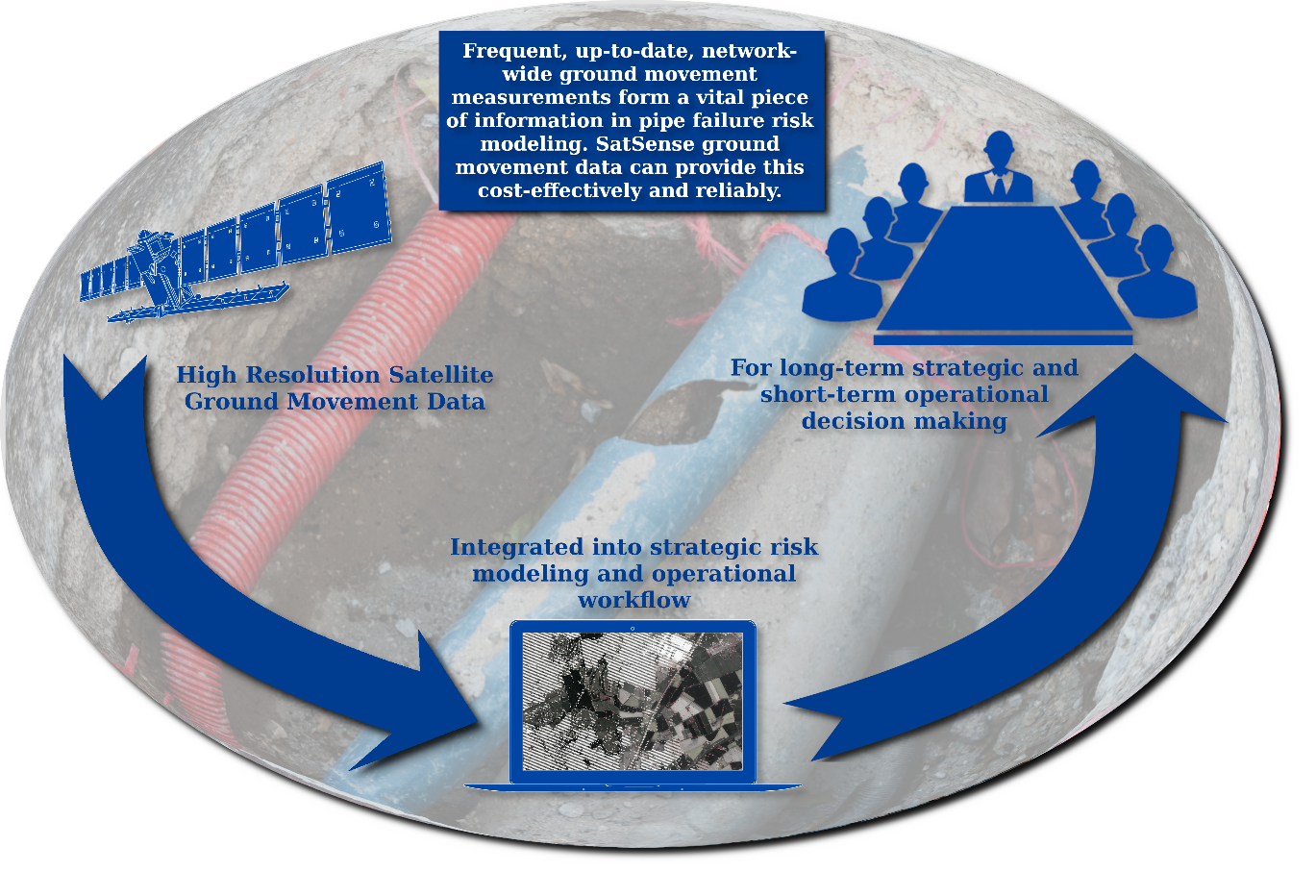 The UK water industry is heavily regulated by the Office of Water Services (OFWAT), with significant fines (or rewards) being issued for under (or over) performance as part of the sector’s Outcome Delivery Incentive. During 2018-19 the sector incurred £108 million of underperformance payments, of which £69 million was incurred for underperformance on leakage, supply interruptions, internal sewer flooding, and pollution incidents. Inspection and monitoring of the network is challenging and costly, and maintenance budgets are stretched. Pipe failure risk modelling is used to prioritise maintenance efforts, based on a multitude of data, including pipe parameters and third party data.

Direct ground movement measurements are currently not included in this risk modelling. SatSense has a country wide ground movement product able to measure movement rates down to 1 mm/year with high resolution. The objective of this project is to identify movements relevant to pipe failure risk and include this data into strategic modelling and operational workflows of water utilities and contractors.

The targeted customers and users are water utilities and their contractors. SatSense data will allow them to:

This will lead to a better-informed decision-making process and a more targeted approach to pipe maintenance and failure repair, preventing events and reducing costs.

SatSense processes all available ESA Sentinel-1 data over the UK and converts this into ground movement products. There are over 700 million measurement points over the UK, all kept up-to-date with newly acquired data. Each measurement point has long term movement rates accurate to 1 mm/year, and a full time history of movement measurements with a measurement frequency of six days.

This ground movement data contains valuable information for water utilities, which we extract by further post-processing. This will feed into an online visualisation platform accessible from anywhere with an internet connection for use by crews in the field and in operational settings. These data products will also feed into the strategic failure risk modelling, improving the prioritisation of pipe maintenance and reducing failure rates. 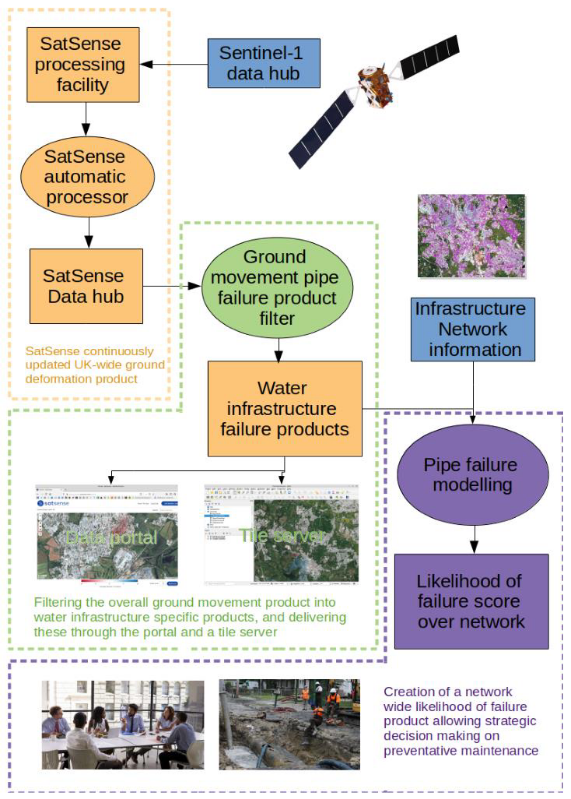 SatSense uses radar data from the Sentinel-1 satellite constellation to infer ground movements and create our ground movement product. As part of the processing, SatSense corrects for topography, for which they use the Copernicus Digital Elevation Model, which is derived from various satellites by ESA. 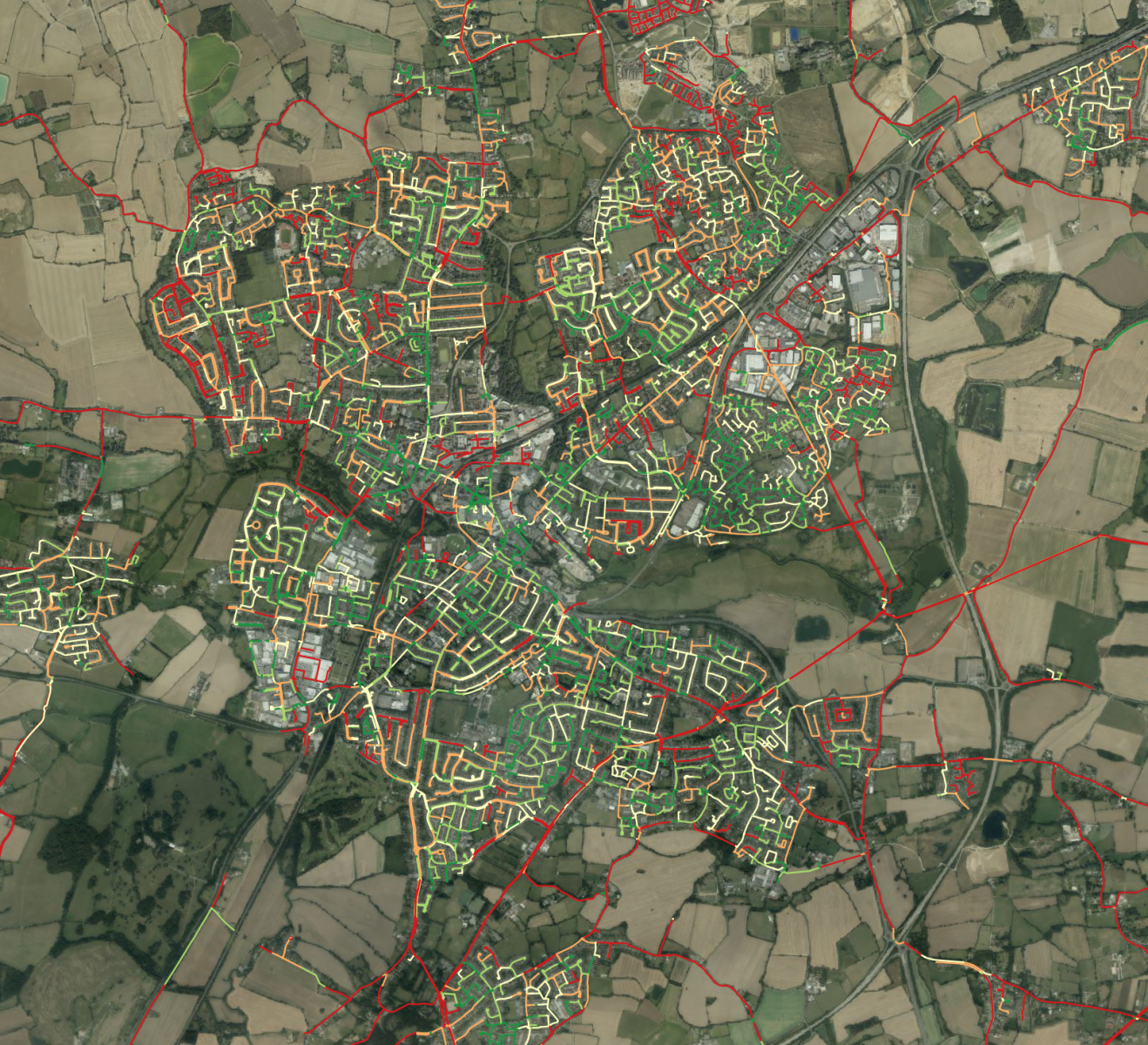 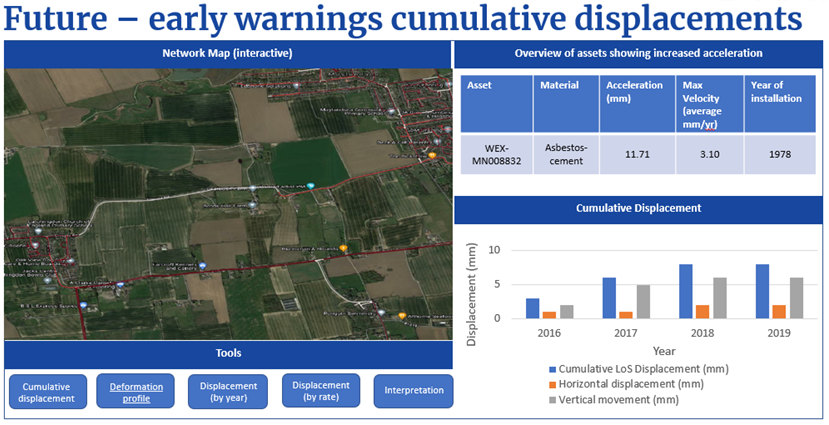 SatSense also identified operational use of the ground movement data as a value add. Working together with key personnel at the two water utilities involved, SatSense has been designing an operational dashboard layout, to demonstrate how the data could be used in the field and behind the desk by operational teams. The above image shows one part of the dashboard. SatSense collected feedback from several people working within the target teams at the involved water utilities and received good feedback and useful areas for development.

SatSense is very encouraged by the outcome of the study, and aims to continue developing a solution to integrate ground movement data into the water industry workflow. SatSense is currently working on obtaining additional funding for a pilot project, and has brought another water utility and a tier-1 contractor on-board to work on this project.