The starting point for the study is an EM system developed by Geosatis, the sole contractor of this FS. The system provides a complete EM solution comprising hardware (GPS ankle bracelet, home-station, mobile charger), as well as a monitoring platform, including a component that displays the location of the offender and various alarms on a map. In the scope of this project, this service was extended with new space assets. The feasibility study had the following main objectives:

•          Develop an in-depth understanding of the EM user needs and requirements. This is achieved though meetings and discussions with users, participating in EM events and conferences, and analysing EM tenders and other requirements documents.

•          Demonstrate the technical and financial viability of an EM service based on the characteristics of the prototype system. This most notably included an evaluation of the developed system (proof of concept) with users by means of a small pilot deployment.

Imprisonment is typically managed at national or regional level by specific governmental bodies. The main actors involved in an EM service are the following:

Offenders carrying EM devices: do not directly contribute to the requirements (and have incentives to actively work against the system) but Geosatis is nevertheless committed to consider the offender in overall system design.

The user needs with respect to EM services cover various aspects of the service, not the least of which pertain to physical characteristics of the bracelet (weight, size, tamper-proofness) or the dependability and security of network infrastructure, but with respect to this FS and space assets, the most important needs are:

EM has a worldwide market and is now very prominent in Europe, the Americas, Africa and Australia.

Worldwide: EM is now very prominent in North America, Europe, Africa, Australia and to a lesser extent the other parts of the world.

The general system architecture is presented in the figure below. The bracelet obtains its location from GNSS, including augmentation systems (EGNOS). To improve the localisation performance, the bracelet also makes use of assisted GNSS via a data link (GPRS) provided by a mobile operator. In addition to GNSS, the bracelet can also obtain its location via a LBS (localisation based on cell tower “triangulation”).

The bracelet and the home-station communicate with the EM server via the GSM network. The bracelet reports its location, status and various alarms. The server can provide various instructions to the bracelet via the same link. 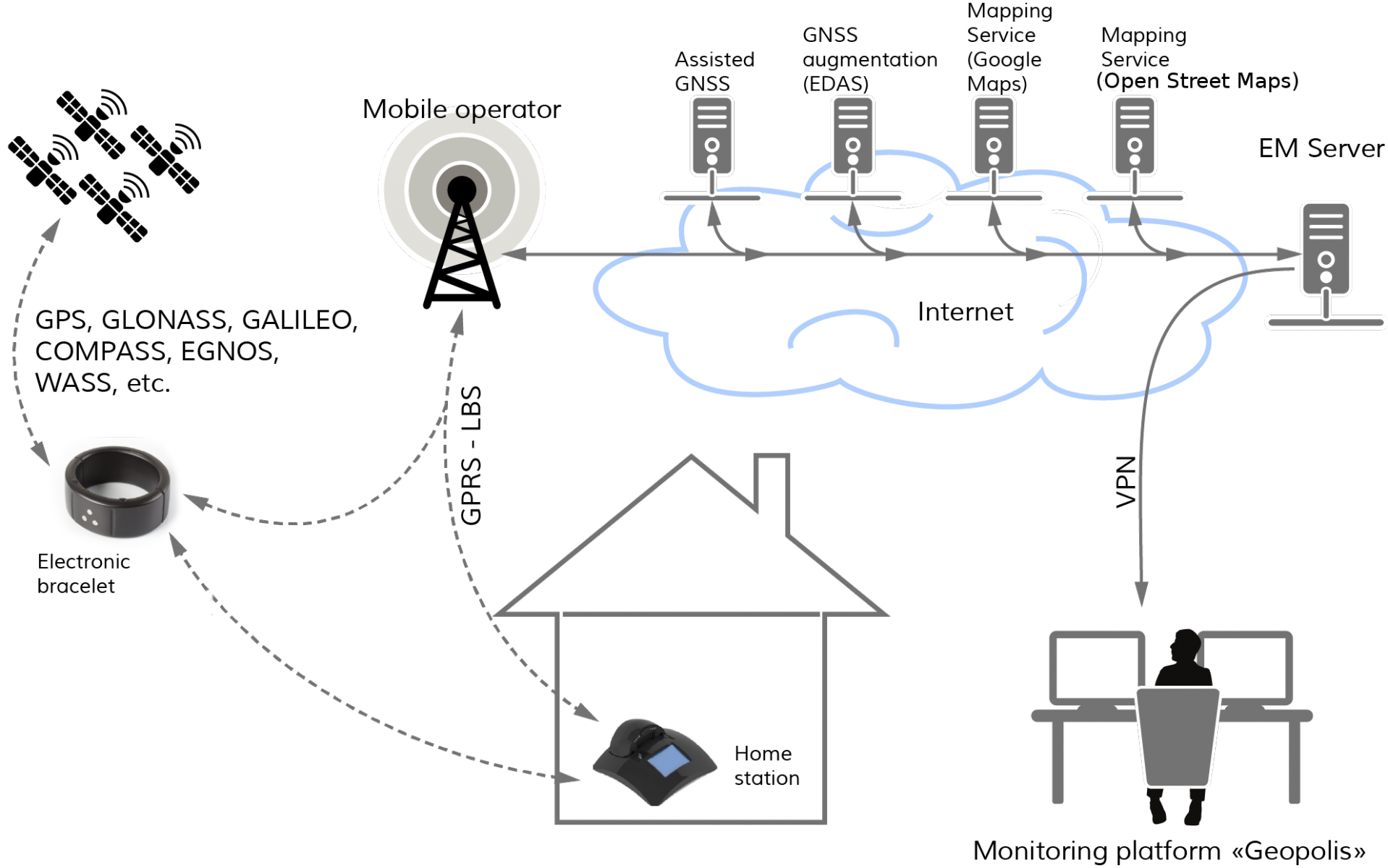 •          Galileo and EGNOS: high geo-localisation quality is essential for the viability of EM. Using alternative GNSS to complement the military-controlled US GPS will yield higher quality of service: better availability and higher precision, as well as improved integrity/security. This is especially the case if some of the envisioned Galileo services. Since Galileo has not yet reached full operational status, the EGNOS system was used to augment the quality of GPS localisation in terms of availability, precision and security/integrity.

•          Space cartography and satellite imagery: part of the reliability of an EM solution is based on the accuracy of the digital maps/satellite images used in the monitoring platform. Previous to this FS, the Geosatis system used exclusively OpenStreetMap, which provides basic map functionality, but has a number of important limitations: no satellite images, and relatively low level of detail in certain areas. Integrating alternative map services (GoogleMaps) with a satellite view functionality addressed the effective and efficient management of alarms and offender whereabouts.

This Feasibility Study (FS) was successfully completed and allowed Geosatis to increase technological lead and gain initial market traction. The viability of the two studied space assets in the EM market was confirmed and the perceived quality of the system/service was increased. Some aspects of a strong space-backed EM solution still remain to be developed and the extra user needs compiled during this FS will be all addressed in a follow-up ARTES-20 IAP Demonstration Project.