Objective of the EMUSER project is the realization of an innovative obstacle detection system integrated with a satellite Broad Band link for the safety of active level crossings.

EMUSER is designed and developed relying on Intecs extensive expertise in the railway domain, deep knowledge of safety regulations/standards and solid technological background.

EMUSER is an extension based on the existing MUSER system developed by Intecs for the detection of unexpected obstacles at level crossings and for the transmission of the related alarms and diagnostics to central control stations, certified by RFI (Italian Railway Infrastructure Manager) and CENELEC SIL-4 compliant.

The introduction of satellite Broad Band link aims to increase the system’s availability.

The sector where the EMUSER offering is positioned is the provision of obstacle detection and signalling products and services for railway level crossings. The sector is worldwide, determined by the more than 600 thousand level crossings in the world, which are spread out among all major geographical locations in all continents.

Within this global sector, the EU market and the rest of the world are characterized by different constraints and factors influencing growth rates.

In the EU market one of the principal drivers for Rail Infrastructure Managers’ investment is the need to adhere to the safety standards and demonstrate compliance by means of certification. Securing level crossings in the EU is a growing trend as the European regulations require to increase the level of safety in the rail transport and level crossings constitute a significant safety concern.

In contrast, markets in the rest of the world are more lightly regulated but dominated by economic concerns. Poor existing railway communication infrastructure and remote locations in vast geographic regions drive up installation and operation costs to untenable levels.

The product fulfils the main RIM’s needs as:

The EMUSER system is composed of one Remote Control Station to control a set of Sensing Nodes. Each sensing node protects a level crossing.

When the barriers are closed, the EMUSER node is in charge of:

The node located along track is designed following a modular approach; the current MUSER cabinet communicates with an additional node called Multi Bearer Node (MBN). The MBN comprises two sub-modules called MBN Cabinet and MBN Dome; the former is in charge of mainly managing the networking, the communication redundancy and the terrestrial links aspects while the latter is dedicated exclusively to the satellite communication.

Moreover, each node is equipped with:

Each node can communicate with the Remote Control Station using different mechanisms (depending on the node location and operational conditions):

In parallel with the commercial solution we decided to equip the node with a type of antenna that does not require satellite dishes. This antenna is characterized by low profile, low weight and reduced complexity.

The integration of satellite and terrestrial technologies represents an efficient step forward to improve reliability, resilience and service availability. 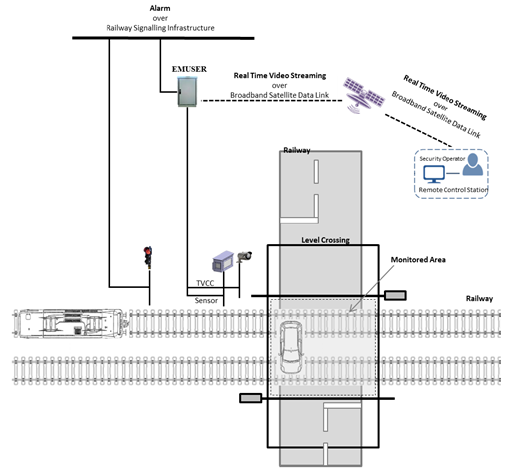 Technically, the main advantages of using a satellite Broad Band link with respect to more traditional approaches (either based on conventional communication channels, or more drastically based on the substitution of level crossings with underpasses or overpasses) are:

After the successful completion of SAT review held in the level crossing in northern Italy, EMUSER system has completed the Pilot Phase lasted 1.5 months.

It is possible to consider the Pilot phase a complete success. First, the installation of the EMUSER equipment as an extension of existing MUSER system, testimonies the high modularity and goodness of the solution. In particular, the installation of the new EMUSER product on Pilot site was possible only after having demonstrated the compliance to the stringent safety rail requirements and guaranteed not causing damage to people.

Secondly, the Pilot phase has demonstrated “on the field” that EMUSER system is totally non-intrusive versus the existing solution since no malfunctions, delays or performance degradations occur.  This is the proof of the high quality of the design and high product’s maturity.

Then, from an operational point of view, a great result is achieved since EMUSER system has appeared completely transparent for the End User. It is observed that service performances were not degraded or experienced different behaviour for different primary communication links. Moreover also in case of simulated critical events involving the lack of primary communication link, EMUSER has reacted, as expected, guaranteeing the increase of service availability without End User having noticed the communication switching.

In conclusion, the Pilot activity has provided us with the possibility to assess the product reliability by keeping the service active 24/7 and stressing interactions more than under normal conditions. It is possible to state that EMUSER product has demonstrated high maturity since no corrective actions or HW/SW refinements were taken place differently on what is generally expected in assessing a new product “on the field” and this makes us confident in considering EMUSER product technically ready for the market.