Large areas of our seas and oceans are inadequately surveyed. With the rise of the “Blue Economy” there is an increasing demand for data, yet there is not the resources to produce it cost effectively using traditional hydrographic survey methods.

EO Crowd is a data portal combining crowd sourced bathymetry, the various types of satellite bathymetry, and Open Data, to be able to service customers with data to suit their requirements in a cost effective manner.

Having accurate and up to date bathymetry is essential to many users, directly or indirectly. Key user groups are:

The base requirement is for up to date, accurate depth data, surveyed to a suitable scale and level of accuracy. On top of this, in many areas the sea bed is moving, e.g. underwater sand dunes; storms changing the direction of channels; and erosion and deposition along the coastline. In these areas frequent resurveys are required to track the changes in the sea bed.

Whilst the initial feasibility study is concentrating on users with a presence in Europe, and particularly the UK, ultimately the service can provide data to users globally.

The concept is to present the user with a portal through which they can select bathymetric data from crowd sourced, satellite bathymetry and open data sources, both as the raw data and also combined into gridded digital terrain models (DTM) at a number of scales.

Behind the public facing portal, crowd sourced data is being gathered from TeamSurv’s fleet of vessels, open data is being sourced, satellite bathymetry data is being produced by Telespazio. All of this goes into a data warehouse, from which data is produced as required to meet customer requests. 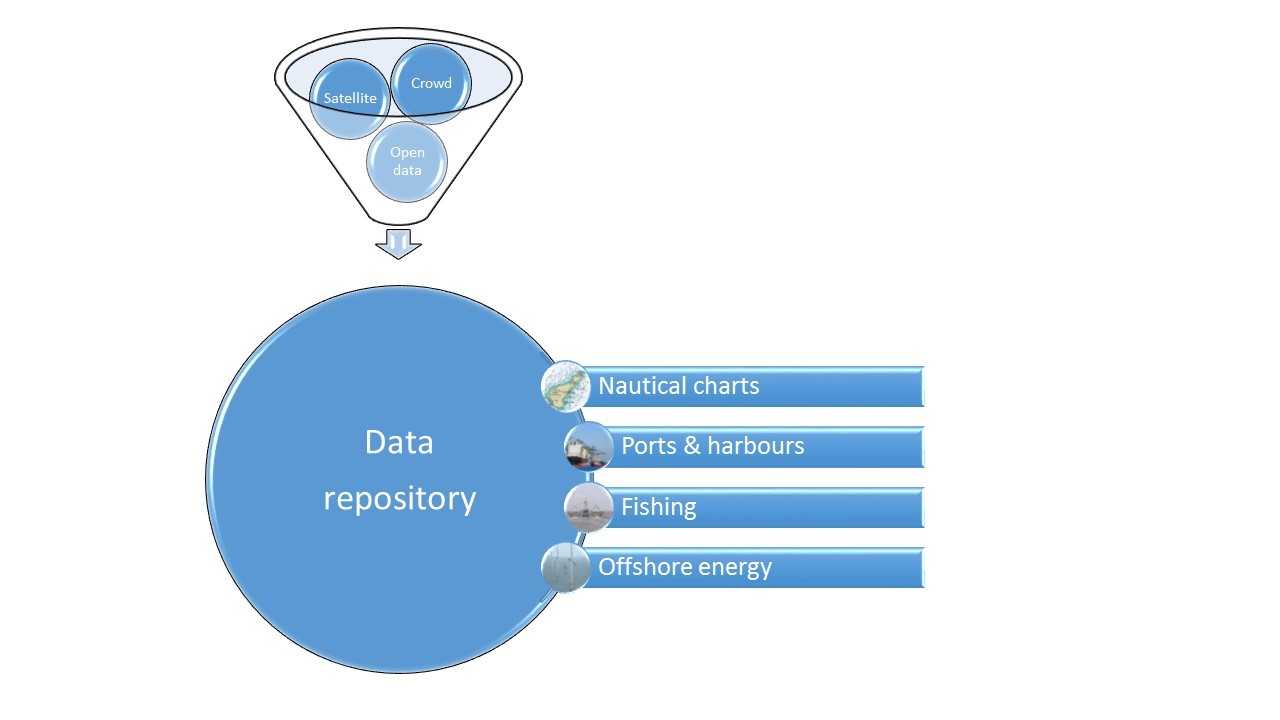 The task of assessing the following Satellite EO technologies as a source for generating bathymetric data is covered by the project:

Additionally the following space assets are also considered in the project:

Satellite AIS is a useful tool to identify ships and fishing vessels in an area, to recruit them as potential members of the crowdsourcing community.

The project confirmed that there is a significant benefit in combining satellite and crowd sourced bathymetry, though at present only optical satellite derived bathymetry can provide the accuracy and resolution required by most users.

Work was done in understanding the crowd – the types of vessels, fleet sizes, where they go, and what motivates them to participate.

Bathymetric open data is not sufficiently available to be of significant use, and its use is often restricted by unclear or restrictive licences.

Potential users of the service were assessed for their potential as commercial users, and it was decided that there is a good basis for a commercial service.

The consortium is able to proceed directly to develop a commercial service, though at this stage a follow-up demonstration project is not foreseen.