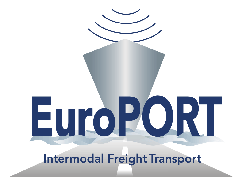 The objectives of this study are to assess the technical feasibility and commercial viability of an integrated solution and associated services which support the optimization of freight transport through ports, based on a better understanding of users and stakeholders' needs, transport conditions, better information exchange, and the use of space assets.

This study is focused on looking for gaps or steps of the intermodal transport logistic chain that nowadays are inefficient and could be improved using new tools based on space assets like satellite communication, satellite navigation and earth observation.

Optimising intermodal freight transport through ports includes many users and other stakeholders, relevant for the successful implementation of a solution and associated services under consideration in this study;

The EUROPORT integrated solution is intended to provide: 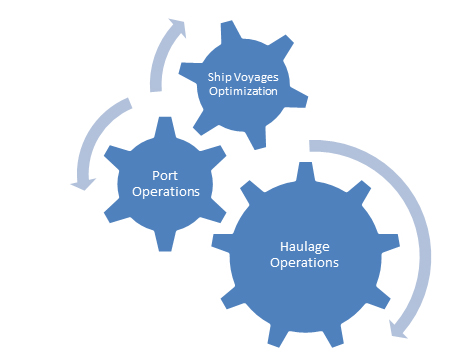 Satellite assets offers the potential to add value in the following ways,

In December 2011, a Workshop with the end users from the Liverpool port community (PeelPorts, ACL and JMD) was held in Liverpool in order to understand the needs and opportunities from the user community related to improving intermodal freight transport through ports. Further identification of needs and requirements of the users was established through interview with Spanish user organisations.

Based on the expression of user needs, a deliverable on "User/Stakeholder Overview and Analysis Requirements" has been prepared and validated with the users. Further to this, a deliverable "State of the Art analysis" has been drafted to understand the present technologies and systems in intermodal freight transport management. Both document form the basis for the identification and definition of the EUROPORT services and the system providing the services.

EUROPORT Proof of Concept has been performed.  Port of Santa Cruz de Tenerife, www.puertosdetenerife.org,  located in the Canary Island (Spain), was the environment selected for this activity.  The EUROPORT integrated solution was developed partially focusing on the truck gate operations scenario bearing in mind the identified critical elements in the project.  Integration with existing systems, "truck drivers as active agents" and container tracking were the EUROPORT critical elements selected for the Proof of concept.  For this purpose an On-board device application, a core EUROPORT server platform and interfaces with the Tenerife Port Management System were developed.

The Proof of Concept "storyboard" consisted of a container vessel from the Grupo Alonso, a shipping line, carrying out the transport of a container from Algeciras Port to the container terminal of Tenerife Port where it was unloaded.  A truck, from a local transport company, performed several voyages to the container terminal gate to pick-up the expected container.  At the same time, the different actors involved in the Proof of concept were performing their expected roles.  The truck driver was using the EUROPORT on-board device application on a Smartphone connected with the EUROPORT core platform to interchange information, transport order status, events, and action requests.

Also special and sensitive messages of authorization to leave the port terminal carrying dangerous goods are delivered directly to the truck driver taking advantage of the integration of EUROPORT platform with the Tenerife Port Management System.  In parallel, EUROPORT core platform is in permanent communication with end users such as Port Authority, Terminal operators, and Trucking company in order to interchange information necessary for operations to be performed by the truck driver and in terms of monitoring the transport order status in real time.

Following this proof of concept, assessment activities were performed about the EUROPORT solution with positive results.  Integration with existing port/terminal and container tracking systems were validated properly during the proof of concept.  Some comments were received from Trucking companies expressing their concern about the need to limit the number of actions and inputs required from the truck drivers.

The EUROPORT integrated solution has shown, during the Proof of concept, the capability to reduce queues in the terminal/port gates, improve the management of transport orders, and improve the control of cargo inside the port.  Furthermore, this solution has the potential to come to a fully operational service in a reasonable timeframe starting with a demonstration project.