As a continuation of the GeoSHM Feasibility Study (FS), we have taken into account the technical and administrative issues identified from the FS stage in order to formulate the objectives that truly reflect the real end user requirements through extensive engagements with essential stakeholders, mainly in the UK, the US and China. The inability to provide essential information on the response of the entire bridge, as well as loading forces and their distributions, such as numbers, types and locations of vehicles on the bridge and their weights etc., proved to be a significant problem for the bridge operators. Another drawback included the data and system outages, which were due to the lack of a stable and reliable mechanism for data acquisition and IT facilities. Currently, the system configuration is only designed to meet the FRB requirements – this needs to be further developed for the Demo Project to accommodate other bridges, with their particular requirements. Users such as bridge masters also struggled with the lack of a simple but effective data strategy that can advise for decision making either for maintenance or operational routines. These issues have been resolved by the development of event-driven smart triggers to control sensors to sample data at different rates and an effective GeoSHM Analyst tool to extract essential information regarding the bridge health condition. Considering these user problems, the main objective of the GeoSHM Demo is to provide an upgrade of the existing GeoSHM installation on the Forth Road Bridge which addresses the technical and administrative issues identified in the FS and to develop a scalable system comprised of innovate methods which can be tailored to accommodate the specific needs of different clients through installation of GeoSHM to two Yangtze River Bridges in China.

Involved in GeoSHM: Universities and research organisations in China and the UK

Targeted users are based in China and the UK initially with intention to explore the European, Asian and the US markets.

The GeoSHM Demo Project uses two space technologies (GNSS and EO) and is augmented extensively with terrestrial sensors as shown in the following figure. 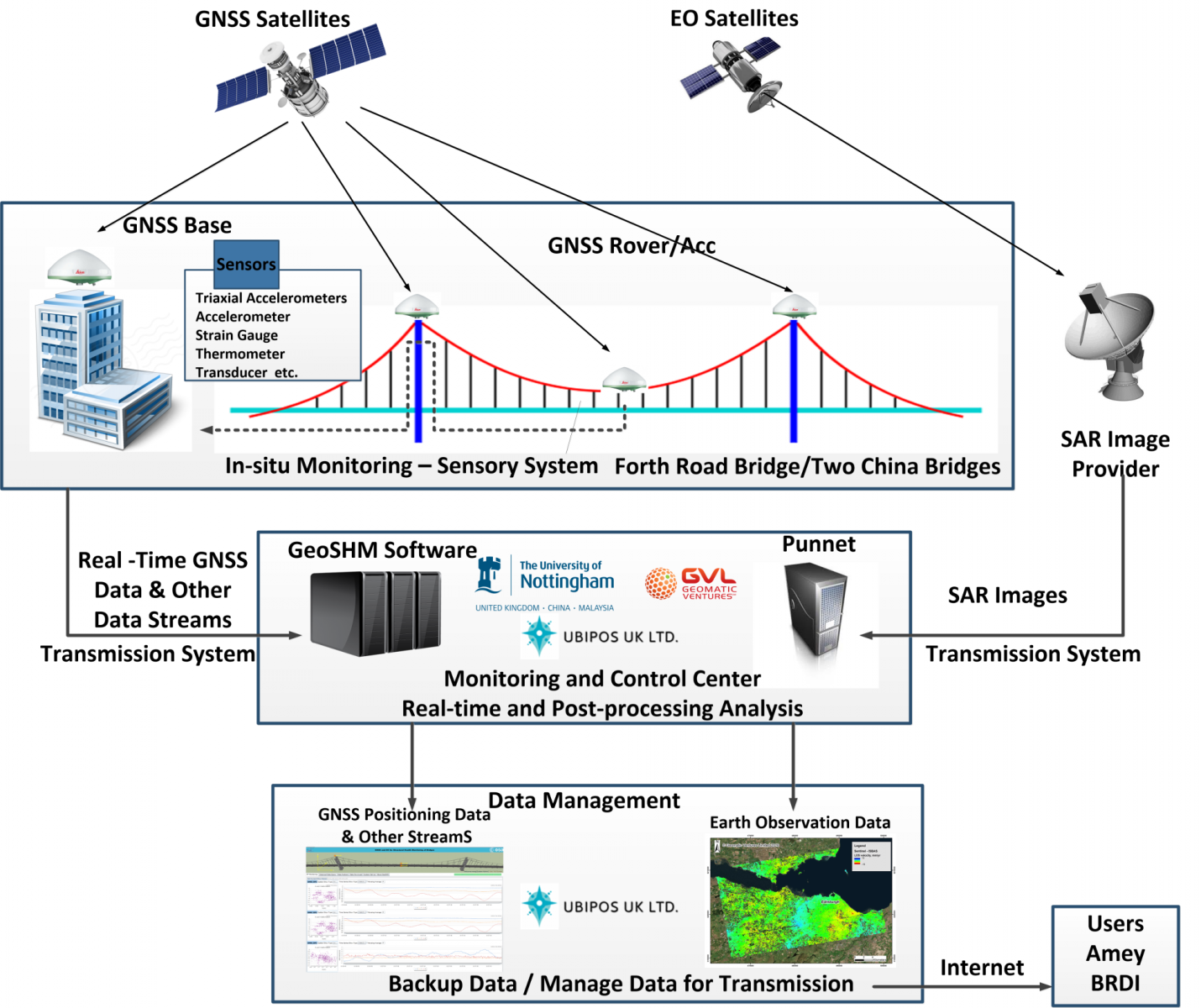 The Building Blocks of the GeoSHM system:

The space assets involved are:

GNSS receivers are installed on critical points of the structures in order to provide the representative, continuous and accurate estimation of the displacement time-series of the structure.

EO data are used in a post-processing mode, focusing on the monitoring of the ground motion of the surrounding area of the structure for the detection of potential ground subsidence and assessing their impact on the safety of bridges. GNSS and InSAR data are integrated when possible in order to baseline the accuracy of the estimation of potential differential subsidence of the structure and for the calibration of the estimated displacement of the bridge pylons. The two techniques are operated independently, so if one fails the other one can cover the monitoring of the structural environment. The outcomes of the GNSS and EO data provide an integrated picture of the soil-structure system, which can improve the maintenance of the structure and the design of potential modifications, with the information generated from other monitoring sensors such as accelerometers, inclinometers, strain gauges, anemometers, thermometers, etc. GeoSHM could provide the information about the interaction of ground motion, dynamic loading and structural response, which cannot be achieved with any other existing SHM solutions.

The GeoSHM Demo project has been completed and successfully performed the final review on 26 April 2019 at ESA Harwell Campus (ECSAT) in the UK. The project started with the Kick-Off Meeting with BRDI in Wuhan, China on 31 May 2016 at which two bridges for the project were identified: Wuhu Yangtze River Bridge and Zhaobaoshan Bridge in Ningbo China. China Daily of Science and Technology and the University of Nottingham also published news releases to announce the GeoSHM Demo Project’s Kick-Off. Moreover, during the project 9 GNSS receivers, two accelerometers, three anemometers and two inclinometers were installed on the Forth Road Bridge. Two GeoSHM-Lite sensors, first of such a type around the work, have been running since November 2018. A dedicated GeoSHM User Interface (UI) empowered with GeoSHM Data Strategy and Analytics has been implemented. The GeoSHM system is processing data from two other bridges in China which form a new business model of GeoSHM, i.e. processing third party data as a service provider. To explore the GeoSHM exploitation opportunities a GeoSHM demonstrator has been set up at the world’s largest news agency, Xinhua Agency, to the congress personnel who are attending annual conferences, to maximise its impact. A clear business development has been developed and around 14 GeoSHM-Lite sensors have already been ordered to be installed as the demo systems on a large dam (the third largest arch dam in the world) and a few high-rising buildings in Shanghai. 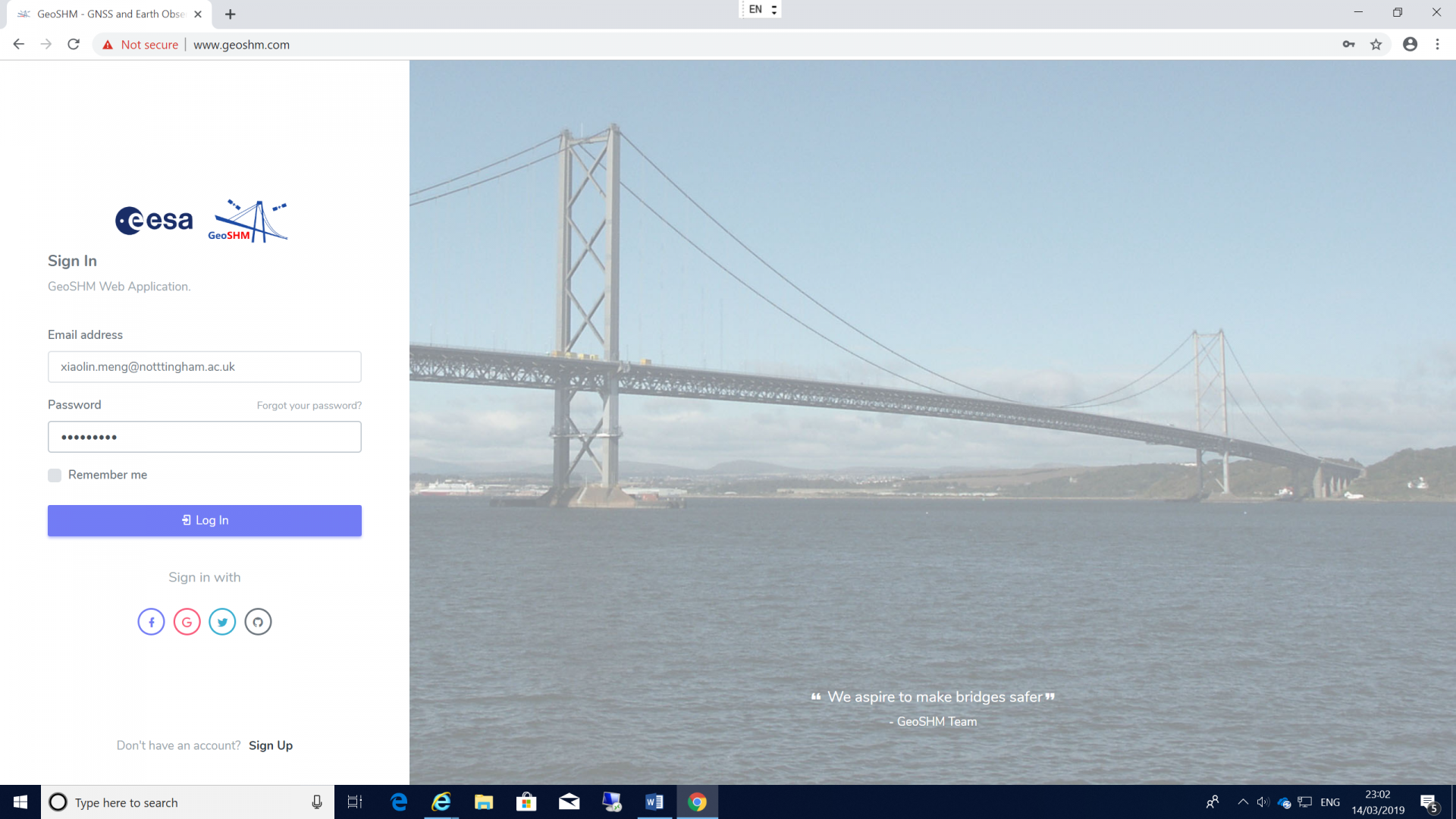