The use of satellite gravity data to model the crust offers the main advantage of providing a regional outline of the crustal architecture that cannot be obtained by sparse local gravity observations or seismic profiles. This regional information can be profitably used by companies involved in natural resources exploitation (especially oil & gas and mining), in the so called “Assets e Prospects” operational phase, which takes place in the initial stage of the exploration activities.

GIADA aims to demonstrate, both theoretically and practically by means of real case studies, the feasibility of a service to exploit satellite gravity field observations, mainly derived from GOCE mission, with others in situ data to build a 3D model of the Earth crust at regional scale.

The service results provide valuable information for oil & gas and mining companies to be used in the identification and selection of the most promising acreages, in terms of natural resources exploitation.

Users and customers of the GIADA service are mainly represented by oil & gas and mining companies.

These users in fact require a good knowledge of the Earth lithosphere to:

GIADA is carried out with the endorsement of one of the major European oil companies and a Mexican research centre.

Service to map geological regions with homogeneous mass density and to retrieve 3D model of the Earth crust.

The service, based on a Bayesian approach, identifies geological homogeneous regions from satellite gravity field data and retrieve a 3D model of the Earth crust in terms of discontinuities surfaces of geological layers and mass density distribution. The knowledge of the correct boundary of a specific geological province with its uncertainty help in understanding the geodynamic asset of the region thus increasing the probability to find a certain natural resource in the area. The 3D crustal model provides the geological evolution history of the area of interest.

The service system architecture is schematically reported in the figure below. 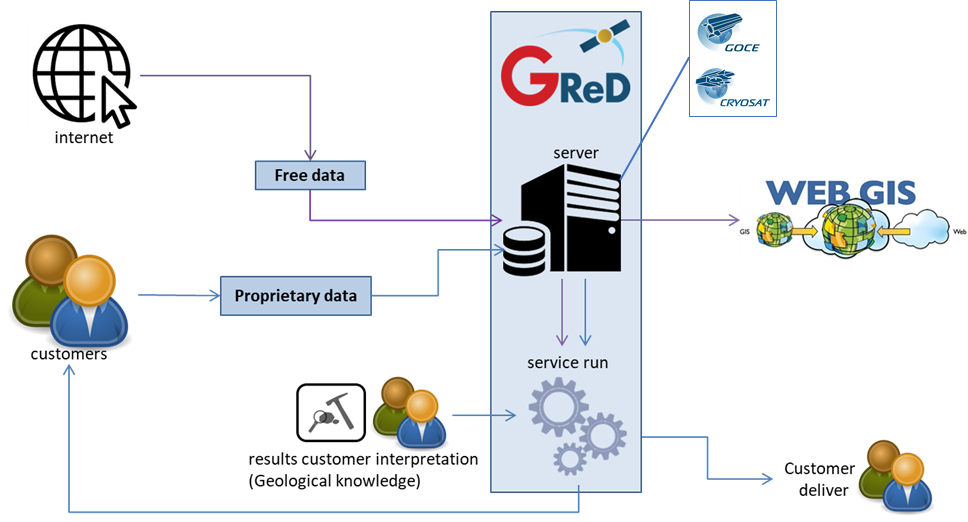 GIADA exploits gravity data acquired from satellite missions. Main sources are data from the ESA GOCE mission, integrated offshore with high-resolution gravity information derived from satellite altimetry (among others the ESA CryoSat mission). The satellite derived gravity field has been proven to be the most appropriate gravity information for regional geophysical investigations. This because satellite gravity observations offer the principal advantage of being homogeneously distributed in space thus allowing for an outline of the Earth crust structure not obtainable from any other kind of gravity observations (neither ground nor airborne or shipborne measurements). Airborne gravimetry for example, even if it is able to provide spatially homogenously distributed data, hardly acquires over areas larger than 150 x 150 km, which are however quite small to observe major crustal features.

In future developments the combination between GOCE gravity field and the magnetic field coming from the SWARM mission can be also considered. 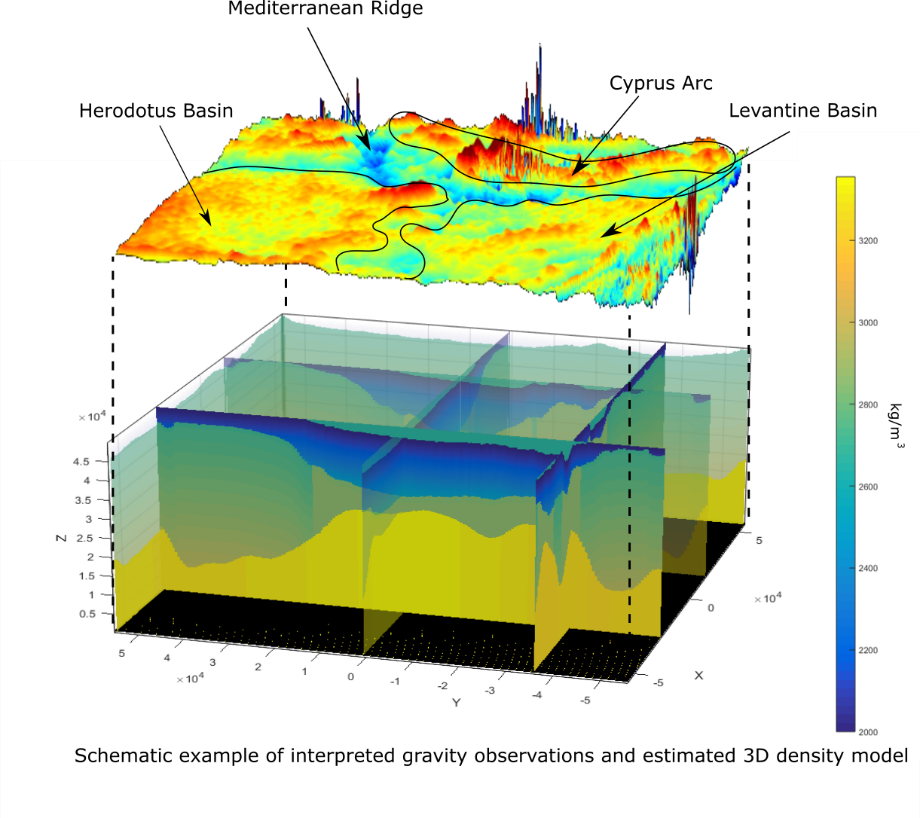 In the first months after the kick-off , the GIADA Team worked, together with the users that endorse the project, to define and consolidate the user requirements, the services architecture and a detailed business plan. After the realization of a prototypal version of the algorithms, in July, the GIADA Team developed a mock up to analyse a real case study  in the Central Eastern Mediterranean Sea area. The mock-up In particular, the automatized interpretation algorithm based on a Bayesian approach provided promising results in the refinement of geological provinces maps. The Bayesian inversion algorithm worked fine as well estimating a 3D model that fitted the gravity observations and was coherent with all the available a-priori information. The results of the mock-up helped to prove the technical  feasibility of GIADA service. Thanks to the mock-up, the team  successed to trigger the interest of potential future customers from the oil&gas and the mining sector. The study ended in December 2020 and the team is working on a follow-on activity.