The Walk2Health service provides new features compared to existing fitness apps that are intended to motivate elderly people to take exercise.  These are  reminder emails that provide encouragement, emails that chart the progress made towards a target, as well as automatic operation for people are less familiar with operation of a smartphone. The app uses GNSS on a smartphone to obtain accurate location data, displaying each walk on a map helps to  motivate users to exercise regularly.

The population in European aged over 65 was 93 million in 2017, and is estimated to increase to 125 million in 2030. The baby boomer generation is now in the age-range 50-65, and there are many potential health benefits from encouraging this age-group to take more exercise. Younger relatives with healthy lifestyles want to encourage their parents to exercise and benefit from better health. Since the population is living longer, more government spending will be needed in healthcare and long-term care for elderly people.

Addressable customer types are local government authorities and the national health service.  Their needs are to reduce the number of people who have poor health conditions resulting from lack of exercise, and are likely to enter hospital due to their health.

Another customer type is insurance providers, their needs are to estimate an insurance premium that reflects the health of each user.

Users in the United Kingdom are the initial target audience.

GoWalk (Walk2Health) works on the basis of providing the consumer (or end user) with the ability to see their activity data in real time, and see notifications that encourages them to continue exercising.

For insurance companies, the information about each user and their exercise taken would be stored, and used by the insurer to provide an estimate of the premium. 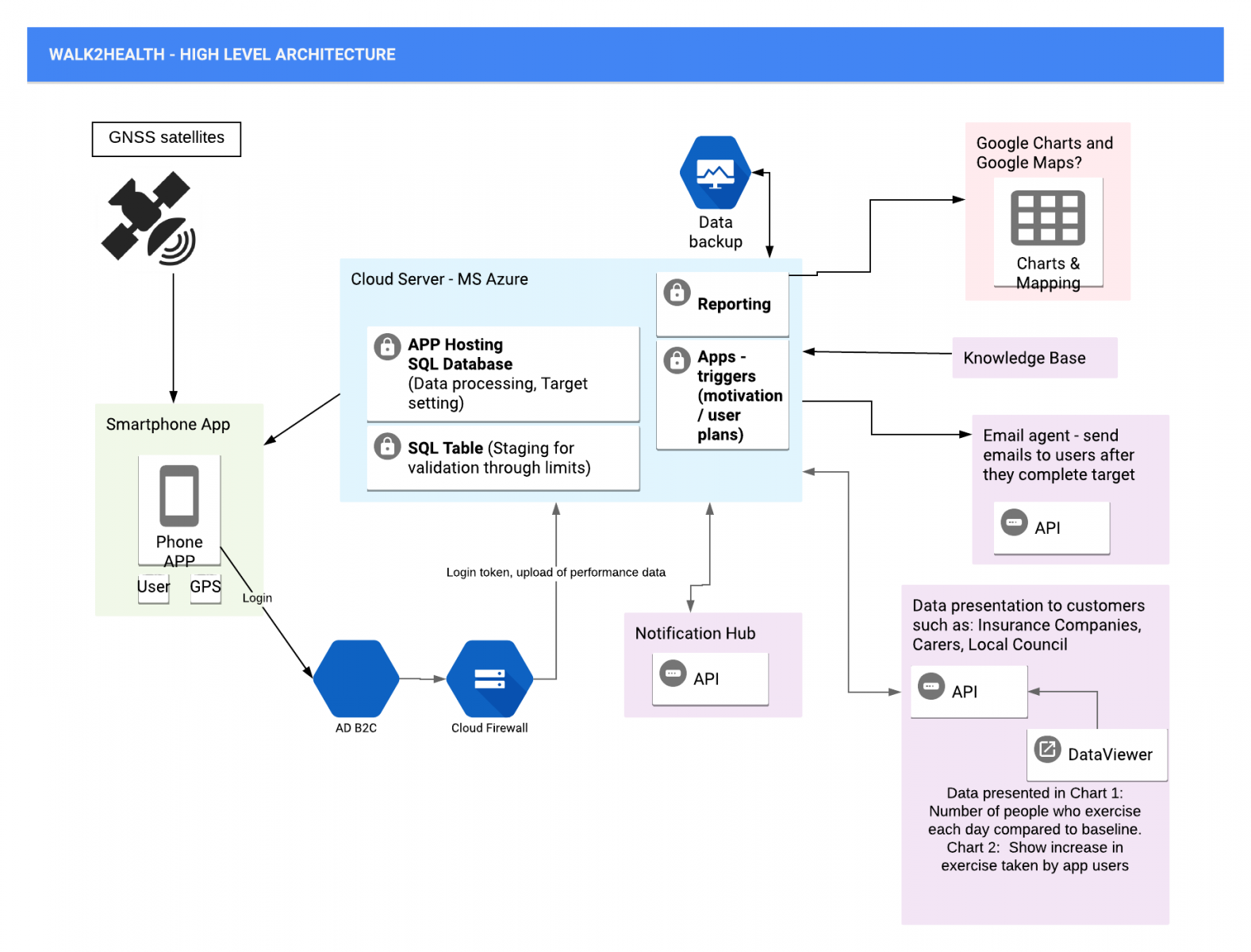 The GNSS functionality of the user’s smartphone is an essential element of this solution. There are several benefits of using GPS/GNSS for walking apps. Walk2Health uses GNSS and calculates the exact distance of each walk and the path the user took. The key benefit of the usage of GPS/GNSS is that the user’s activity can then be logged and a map or visualisation can be outputted. Other apps may not use GPS/GNSS, and use the phone accelerometer to count steps, which has poor accuracy.

The Kick-start activity is closed. The activity showed that the service provided by Walk2Health has the potential to encourage older people to regularly take exercise. However there are many competitor apps that provide similar functionality, but aimed at younger age-groups. This presents a risk that competitors could adapt their apps to target the elderly age-group. The economic viability of Walk2Health is not yet proven, it is planned to do a trial with a local authority to understand the business model outside an ESA activity. In summary, during the Kick-start the activity only limited business potential for the proposed solution was shown. Therefore no application for a demonstration project is foreseen.