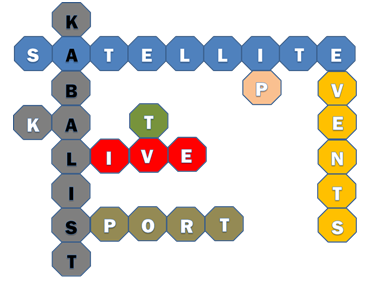 The project developed a service platform based on the utilisation of the KA-SAT satellite for the live video feed of non-mainstream sport events, associated to a terrestrial based IP live video distribution.  Such innovative platform is utilised upgrading the experimental permanent KA-SAT installations in all Italian “Serie C” stadiums at the beginning of the 2014 season.

A CCN has been granted with the objective to extend the service to other minor leagues (e.g. volleyball) upgrading the existing architecture.

“Lega Pro” and Sportube are the users targeted in this project. Lega Pro is the owner of the Italian Serie C match video rights. They have the interest to improve the shooting standard of these matches to High Definition (HD) format, to increase the value of the rights of the matches. Sportutbe (the online video streaming platform authorised to exploit the matches rights) needs an affordable and high quality transmission allowing them to stream the matches via Internet to reach their final users.

The activities in the mentioned CCN are related to the satisfaction of more demanding requirements of the target users (e.g. volleyball and beach volley) in terms of costs and matches duration. In fact, the duration of a volley match is unpredictable with the consequence on the total costs of the service.

The potential final users of the service are estimated to be 20 million people in Italy and more than 200 million in Europe, considering all potential leagues and countries.

To extend and consolidate the initial permanent installations for satellite transmissions from all the stadiums of “Serie C” in Italy, equipped by DBW before the start of the 2014 season, the architecture makes use of efficient source coding equipment, double user terminal per camera transmission, characterization of propagation phenomena for each site, optimization of dynamic bandwidth allocation over IP management and routing information flows utilizing gateway diversity technique. 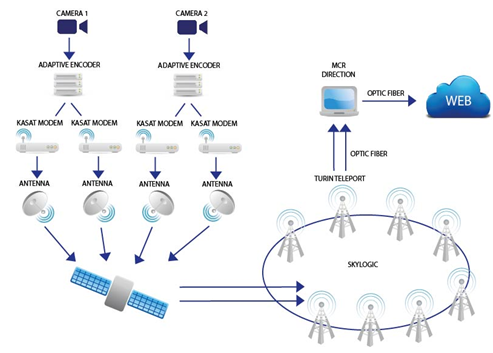 For minor sport leagues, the system evolution complies with the need of a high-quality transmission, the mandatory use of two video cameras and a lower event transmission cost.

An upgraded system architecture has been implemented, introducing the adoption of a new video compression standard, based on H.265, and of a remote direction platform, that guarantees significant bandwidth savings. 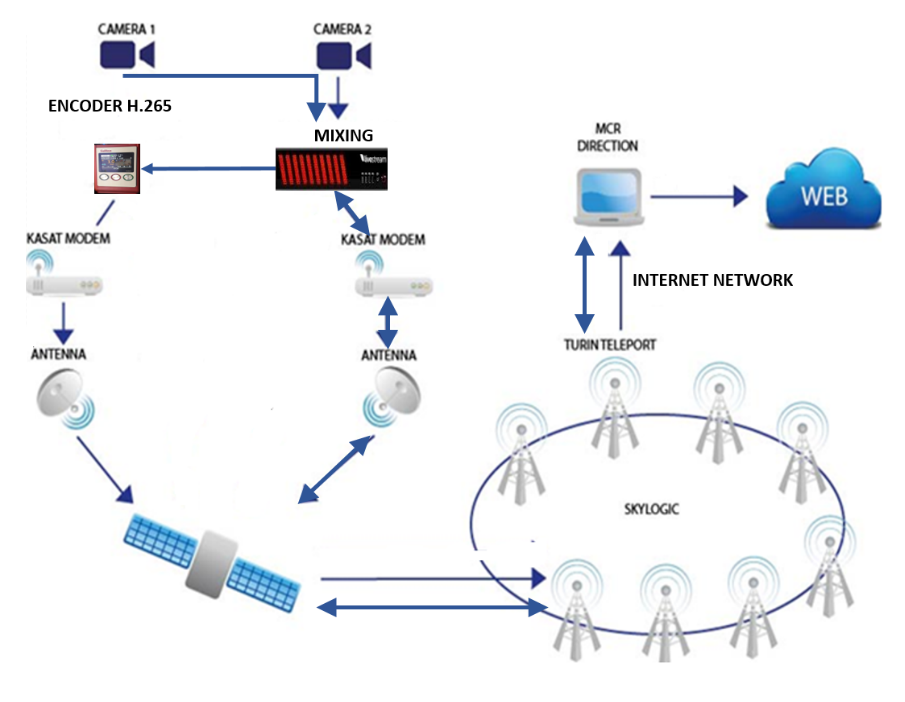 The developed system can deliver :

KA-SAT is the Eutelsat Ka-band High Throughput Satellites (HTS) that is used throughout the project. It provides the necessary capacity to exploit efficiently the target service guaranteeing the required quality of service at acceptable cost. The use of the satellite allows the coverage of all the sites, the flexibility of using the bandwidth only when needed, avoiding resources underutilisation (like in the case of dedicated fibre optics) and the availability of the necessary bandwidth. Satcom can also offer a guaranteed bit rate. Theoretically, last generation terrestrial wireless systems (4G) may offer the same type of service but their coverage is mainly over the largest cities (while the sites for Lega Pro championship are mainly in small cities) and the capacity must be shared with other users, that in case of crowded sports events in the stadiums can already overload the available cells.

The KABALIST Pilot Project associated to live coverage of Serie C has been successfully concluded during the season 2015/2016, with the  live coverage of the events associated to 51 stadiums on the Italian territory.  The service is still operational (June 2017), with installations in more than 50 stadiums. A commercial offering is in place as pay-per-view events on http://sportube.tv

The CCN pilot was held in Rome (Ostia) on 6-7 May 2017, during the finals of the Italian Beach Volley League.  The pilot confirmed that the new architecture allows to reduce the bandwidth usage of about 40/50%, offering a significant reduction of the event transmission costs (which is estimated to be around 18-19% compared to the previous architecture).