The objective of this study was to assess the feasibility of an integrated landslide and subsidence forecasting, monitoring and alerting service and whether the implementation of Earth Observation datasets, deployable GNSS modules and satellite communications to relay in-situ observations into a central management system is technically feasible and can provide economic benefits to the end users at a network or national level.

The study was driven by the needs and requirements of the end user organisations. Such requirements were defined by engagement with end users from the transport infrastructure industry in the UK, Norway and Czech Republic. In addition, a comprehensive review of the state-of-art forecasting, monitoring and alerting technologies critically evaluated those technologies that can be utilised to meet user needs.

The Live Land system integrated a suite of user driven services which were technically evaluated and validated within the proof of concept stage.

The study also evaluated the commercial / economic viability of a sustainable and scalable landslide and subsidence service that reduces exposure of users of the transport infrastructure to landslide and subsidence events and allows implementation of hazard reduction strategies through the prioritisation of resources to target high susceptible slopes / embankments / cuttings through engineering measures.

Upon conclusion of the study, a roadmap for further implementation of the system as a demonstration project was prepared.

Infrastructure owners, such as national governments, would benefit from geological intelligence that would allow them to prioritise maintenance, risk mitigation strategies and monitoring across the network in response to perceived geological hazards susceptibility. This would also be true for commercially owned roads and rail networks in territories that have a significant susceptibility to landslides and subsidence. Local government, who (often) have the responsibility of maintaining the local road network, will also be a potential end user of such a system in those susceptible areas.

Transport service operators, such as owners and service providers of rail and road passenger and freight services also require an understanding of landslide and subsidence hazards to facilitate management of their operations allowing them to plan routes that reduces disruption. Such information would be particularly useful in remote, sparse transport networks, where re-routing on the fly in response to a landslide or subsidence event could lead to significant delays and incurred costs.

In addition, several other potential users have been identified such as insurance companies, who require a detailed understanding of landslide and subsidence hazard susceptibility on their insured assets. Utilities companies who have high-value assets distributed over remote terrain that is susceptible to hazards would also benefit from the Live Land system.

The core concept of the proposed Live Land service is that it uses the appropriate set of technologies to monitor the geological hazards affecting the user's transport infrastructure. The specific individual service products required and their provision is dependent upon the criticality of any geological hazards (spatial and temporal dynamics) to the user's infrastructure and individual user needs. 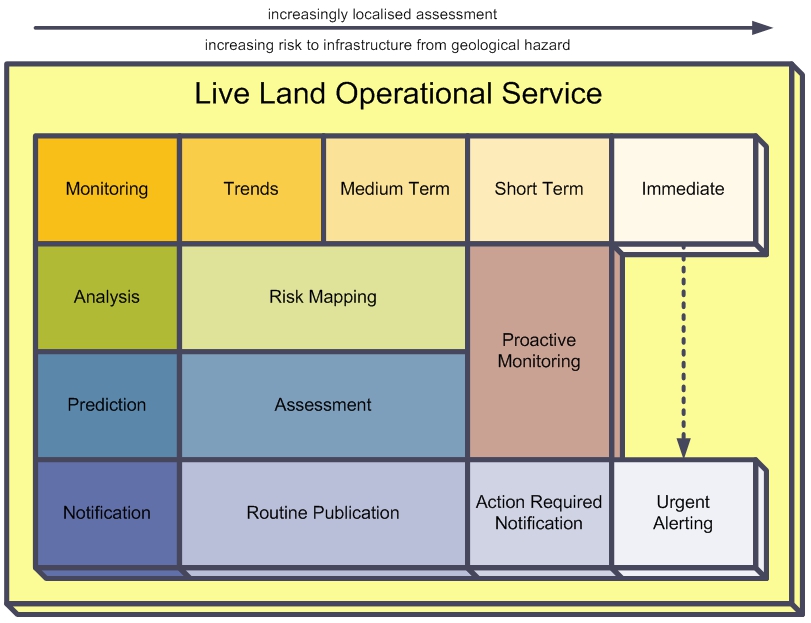 The Figure above describes Live Land's high level service concept in terms of four interacting functions "Monitoring, Analysis, Prediction and Notification" each of which contributes to services monitoring geological risk at different temporal and geographical scales, from wide-scale trend analysis to an immediate assessment of localised landslide potential during severe bad weather.

Space assets provide significant added value to the Live Land service. Earth observation and GNSS technologies provide the capacity to enable repeat monitoring ensuring landslides and subsidence events can be monitored according to their spatial and temporal dynamics. SatCom technologies permit the relay of data from in-situ monitoring equipment and from the latest generation of smart GNSS transponders, independent of location and access to terrestrial networks. Space assets provide the only feasible means of predicting, monitoring and alerting for such hazards across a large and often remote transport network.

The Live Land feasibility study is now complete, with the production of all the various project deliverables. The POC study successfully demonstrated both the technical feasibility of key Live Land technologies and also positive feedback from the end users on these technologies. Live Land has defined the three tiers of services that will be offered to forecast, monitor and alert for landslide and subsidence hazards affecting transport infrastructure at both the local and network scale. A roadmap has also been created, which defined how these tiers can be developed through the demonstration phase to a fully operationally service that maximises user benefits.

The next step will be to take this project into the demonstration phase. The consortium is currently engaging with the end users to ensure their commitment to supporting any resulting demonstration project. 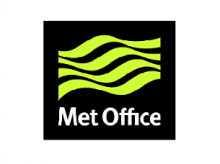