The ultimate objective of Project Mercury is to establish an incontrovertible business case for the adoption of a new managed service that can deliver full communications via satellite to mobile breast screening units in the UK. 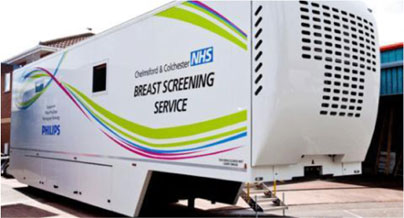 The transmission via satellite of medical images (mammography data) will bring the following advantages:

Satcom: relying on physically transporting clinical data from diverse locations has become a source of increasing concern to governmental and medical practitioners for quite some time. The loss of data is both extremely costly and most embarrassing. In the mobile X-ray environment, it has long been the wish to be able to remove the risk to the client and organisation of physically transporting large amounts of data from one location to another and until recently there was no affordable solution. Therefore the use of satcom (Avanti Ka-band Internet services) is key for the success of the project.

Satnav data: GNSS data (date and location) will be indelibly embedded into the patient medical data. Such data can be useful for identification purposes, auditing, mobile units tracking, as well as statistical mapping of breast cancer using anonymous data.

Following the Final Review Meeting held at ESTEC on 21st August 2014, the Mercury project was declared as successfully completed.

The demonstration phase of the Mercury project has been successfully completed and RedFoot are now collaborating with Avanti to produce a White Paper analysing the results of the 12-week trials. An extension of the contract has allowed RedFoot to improve the MERCURY service for users through the implementation of two additional functionalities: automated cross checking and satisfying Information Governance in neighbouring administrations.

Successful demonstrations of the Mercury Service have been completed across ten sites in England and further sites in Wales and Ireland. User satisfaction has been very high and some of the original sites have already contracted RedFoot for the provision of a commercial service while others are now beginning their migration towards operations under the commercial provision of MERCURY.

Interest from users not initially involved in the demonstration project is now accelerating.

Through the demonstration phase, nearly 250,000 breast screening images were transmitted by satellite without a single loss. RedFoot have successfully delivered live access to Work Lists; NBSS software and standard applications including internet and email. This has all been achieved for users who for twenty years or more have never experienced any connectivity at all.

The service has proven its capability to provide significant advances for the Breast Screening Service in the UK and beyond and it is already proving to be a vital link in the move towards paperless working in the Service.