Strong small–scale weather phenomena, such as heavy rainfall and turbulence that escape the temporal and spatial resolution of present weather forecast services are frequent surprises during the approach and landing of airplanes. Also, flocks of birds appear to the route of airplanes without warning. Usually the pilot can handle the situation, but still tens of airplanes have crashed with hundreds of casualties in such accidents.

We aim at developing high spatial and temporal resolution micro-weather nowcasting service, which provides predictions of the described dangerous situations derived by fusion of the weather data with accurate real-time position of each aircraft received from the ADS-B system.

Space Weather, originated in the enhanced electromagnetic radiation, mass ejections and energetic particles from the Sun that interact with the Earth’s magnetosphere and ionosphere, causes a number of phenomena. For aviation, the important phenomena are long range HF radio disturbances, GNSS signal corruption, and increased radiation at cruise altitudes of passenger flights.

The other other aim, connected to ESA’s SSA programme, is Space Weather Service, including space weather forecasts with a resolution high enough to enable more economic, radiation safe route planning and scheduling of flights, and preparedness for GNSS signal and HF radio disturbances.

The Micro-weather Service is a localised solution for Approach and Tower ATC (Air Traffic Control), and for the pilot of airplane. The potential users are thus, airports, Air Navigation and ATC Services, and airlines.

In order to increase the efficiency and throughput of an airport, to improve air traffic safety, and to reduce the risk of catastrophic incidents due to natural phenomena, better situational awareness is needed, including severe micro-scale weather effects and large flocks of birds, and the position and dynamic information of all aircraft within the approach zone of the airport. The final end-user need is,

The Space Weather Service is for regional scale, and it is used to support route planning and scheduling of flights, and regional ATM. The users are regional ATM operators and airlines.

The background need is to minimize the negative impacts of Space Weather to aviation. The end-user needs are real-time global maps and 24 hour forecasts of the following effects,

From these, it is possible to derive a number of needed end-user services.

The services are aiming for use by airports and aviation globally.

Using the real time position information and path prediction of the aircraft based on uninterrupted ADS-B data, high resolution forecasts of the propagation and evolution of the severe weather elements, and flight path observations of birds within a relevant region around the airport, the system detects potential incidences, makes a real time analysis of the event, and raises an alert when necessary. The alerts are delivered in an agreed format to the airport ATC and/or to the relevant aircraft as support information for decision making by the person in charge.

Space Weather covers very large geographical areas, and thus enroute actions, such as changing the route or altitude by sufficient amount can be an effective mitigation measure only in the vicinity of the edge of airspace affected by Space Weather, since the extra fuel in passenger flights is limited. Contrary to that, Space Weather Services that are provided for airline flight planning and regional ATM, with forecasts extending to the end of planned long distance flights, can be exploited more effectively, and have potential for significant added value.  Possible end user services are, forecasts of radiation dose, RF disturbances, or GNSS signal corruption, for a given path in space-time. 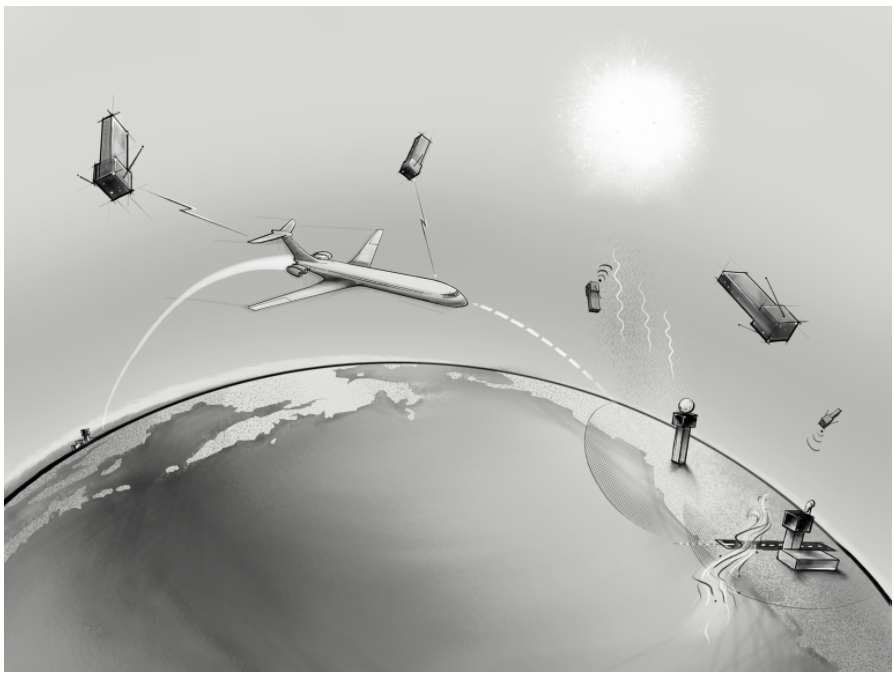 The ADS-B SAT systems in plans and under development, and GNSS are technically coupled, and thus, as real time position information of all aircraft is a requirement for the planned services to be effective, both of the above space assets have a fundamental role and critical added value in the MSW-Service concept, when we consider service provision in global scale, independently of local assets available for an individual customer. The Micro-weather service component can penetrate limited market, including airports with good real-time aircraft positioning by ADS-B TER or similar systems, such as the Helsinki-Vantaa airport. As for the Space Weather Service, knowledge of an aircraft position throughout its passage in airspace is also needed for provision of the services.

The role of Weather Satellite assets is not as critical, and the added value is limited to lower resolution supporting information for the weather forecasts. 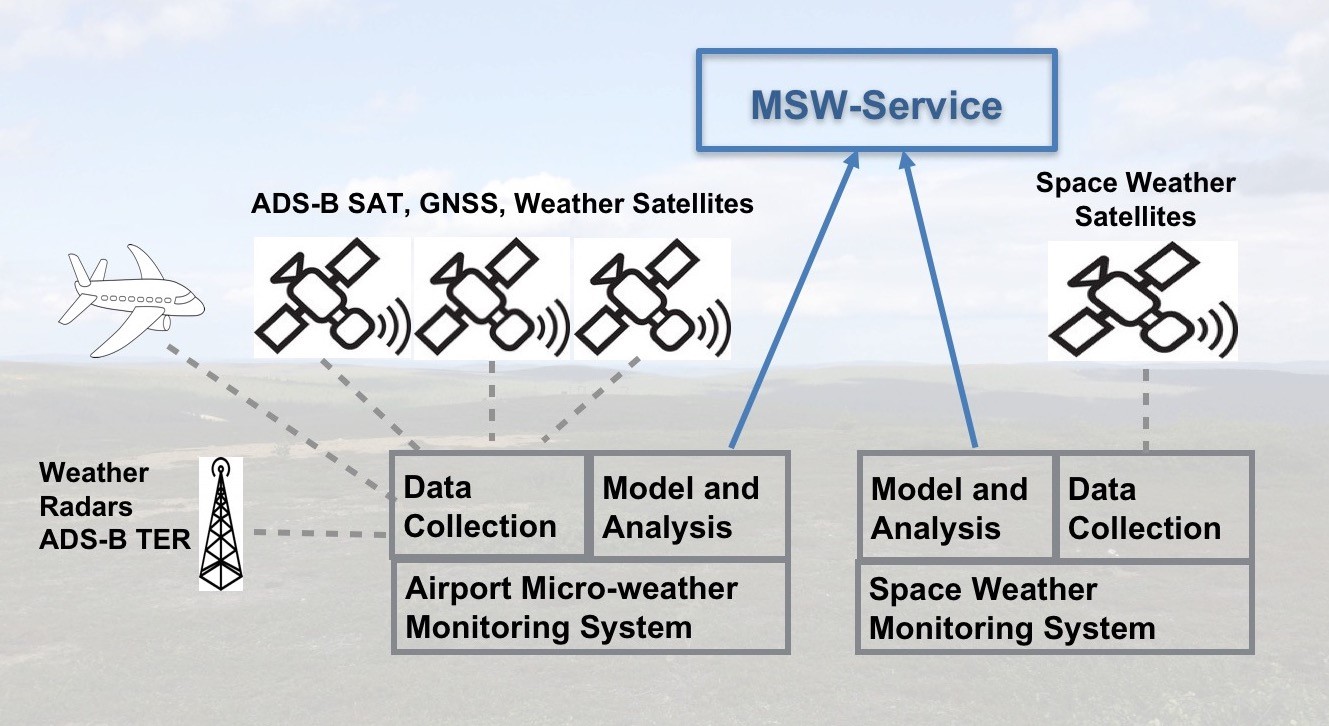 The project started in the beginning of June 2017, and is completed. The final conclusions are that the Micro Weather Service (MW Service) is feasible both technically and commercially, and the plan is to go forward with a Demonstration project. It was found that MW Service would attract the customers even more, if bird and drone detection were also available to give more complete situational awareness at airports. The Space Weather Service still needs to be developed further for both observation infrastructure (in space) and modelling and forecast aspects. It is also not clear how the services should/will be organised at high level, since space weather services need to be regional, covering whole continents, and eventually the whole world.  However, the project gave a good insight on the technical and commercial aspects, and deeper understanding on the users’ needs, and what kind of Space Weather Service that is useful for aviation at operational/practical level.