The efficient operations, capacity management and cost saving for future airport are dependent on the DIGITALIZATION OF AERONAUTICAL DATA. The current handling of the digital data on the airport is not very spread. The current situational awareness is mostly done by voice communication or by temporal pdf maps.

Proposed system is providing the framework for digitalization of aeronautical data in AIXM format which is supported by ICAO and EUROCONTROL. The data could be used for optimization of airport processes, use GNSS equipment to monitor ground movement and better use of satellite navigation.

With the advent of GNSS services, surveillance data and derived information (e.g. runway occupancy status) are also becoming available to non-ATC users (e.g., pilots) throughout all phases of flight, including aerodrome surface operations, and even at non-towered aerodromes. Users of the source of surveillance data, along with an accurate, complete, and up-to-date Aerodrome database, can be provided with a supplemental means of observing traffic positions on the aerodrome surface in any visibility condition on a graphical display.

The current handling of the digital data on the airport is not very spread. The current situational awareness is mostly done by voice communication or by temporal pdf maps.

The user expectations from digitisation are  in this areas :

To support this  concepts the user needs are as following:

The project implementation is crossed around multiple stakeholders as is showed on the figure: 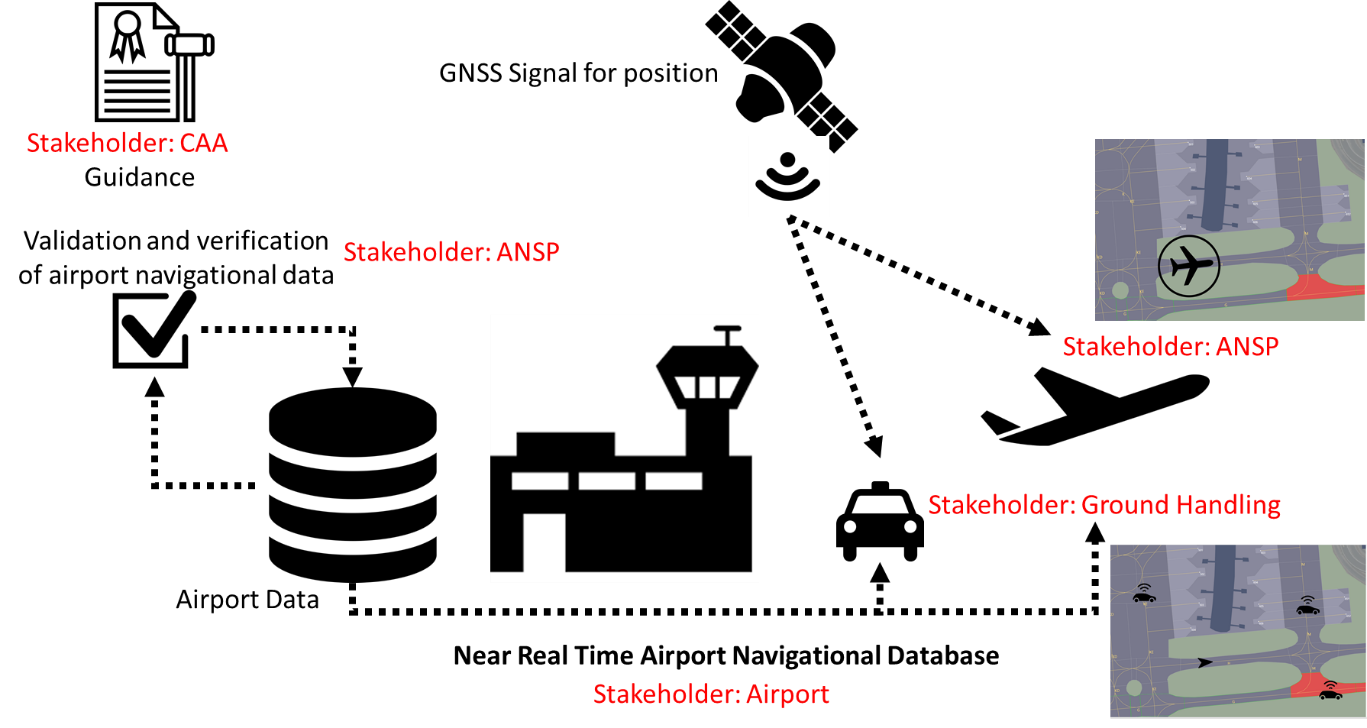 CAA: Guidance creation based on the EUROCONTROL and ICAO Requirements

ANSP: Validation and Verification of the data could be delegated to ANSP and also end usage of the data for design procedure and navigation is considered.

Airport: Airport is owner of the solution and lead participant of the process. This stakeholder is managing the database from the point of view that is source of all changes. Airport is also biggest user of the data

Ground handling:  Example of the End User stakeholder which uses data for safety operations on the airport.

In combination with GNSS equipment ground movement can be monitored.

In the same time in combination with satellite digital data can be used as well in:

One of the anticipated applications of GNSS is aircraft navigation on the aerodrome surface. However, not only must one have a robust positioning system (i.e., GNSS) to perform the navigation function (i.e., determining position and velocity), there must also be a means by which this position is relayed to the flight crew. One approach to achieve this capability is to present the positioning information graphically to the pilot relative to geographic locations of aerodrome features that are stored in an aerodrome database. These features may be, for example, centerlines, runway/taxiway edges, and/or painted markings. In other words, using GNSS, an accurate up-to-date aerodrome database, and a display, the airport airside stakeholders can determine, in real-time, both lateral and longitudinal track deviations from the desired track (independent of visual aids).

Focus of this first phase of the project is on analysis of current situation of potential customers in area of digitalization of aeronautical data, clarifying their expectations and preparing detailed user requirements on the level necessary for defining service and requirements for SW development.

Together with Air Navigation Service Provider of Czech Republic we analysed already running procedures and discussed the possibility of their connection to Aeronautical Data Chain as part of proposed service.

Following months, we plan to focus on definition of target service and overall concept of the system and further involvement of potential partners.