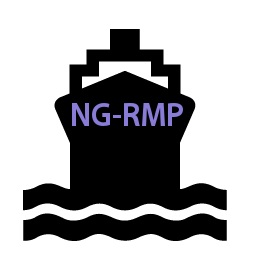 Within the Next Generation Recognised Maritime Picture (NG-RMP) project, two major objectives have been focused on: firstly the integration of several vessel information data sources that are not currently used by the Irish Navy Services for generation of the RMP, ranging from S-AIS data, CCTV footage available in major ports, and vessel data from port and shipping authorities; secondly the addition of an automated decision support system which will use the underlying data captured from the multiple data sources to generate a dynamic and improved RMP. The decision support system uses state of the art data mining, data analysis and simulations to provide for early identification of unusual behaviour of vessels and to alert RMP operators for planning of future investigation of these vessels by the INS.

By using these emerging and state of the art technologies and the approach described above, the Irish Naval Service expects to improve its efficiency and capabilities through a better assessment of potential "vessels of interest" that need to be investigated further by both personnel within the operations centre and deployed naval vessels.

The primary users of the NG-RMP system are either personnel interested in the recognised maritime picture of the Irish Coastal Waters within the Irish Naval Services (INS) or insurance organisations with a marine vessel portfolio. Within the INS these personnel would be operators and commanders within the command centre at the C&C HQ who are monitoring the coastal waters. Additionally, captains of INS vessels patrolling the area of interest will use the NG-RMP system to obtain a common operational picture and information on identified vessels. External organisations such as the Irish coast guards and the government customs services would also be end users of the NG-RMP system. Within Insurance organisations, end users range from brokers through to insurance claims management personnel.

The needs defined by the INS end users are to integrate a number of vessel information data sources each from diverse domains, which can be correlated and interpreted to form a single RMP of the Irish Coastal waters. Highly accurate electronic naval charts (ENC) are required for representation of the RMP to an operator. The need for such accuracy is due to different naval laws being applicable depending on the distance of a ship from a coast line. Automatic identification of ‘vessels of interest’ based upon the interpretation of a number of rules is performed by the system. The users also have the ability to create exports of information within the system for possible legal court cases. Furthermore, external access for organisations to view the RMP using standard web technology is provided.

The NG-RMP system provides a comprehensive security system for access to data and features based on a user’s defined role and rights.

The core NG-RMP baseline system was further developed through two additional CCN1/CCN2 contracts to enhance and tailor the system for usage outside of security and within the domain of insurance/reinsurance organisations.

Through the CCN1 contract, NG-RMP has additional modules integration tailored for the marine insurance industry. The NG-RMP insurance modules provide the features of:

Pay as you use:

Currently insurance companies are not able to offer ‘pay as you use’ policies to the marine clients as there is no effective mechanism to record and log vessel voyages.  NG-RMP now provides an effective framework to enable insurers offer specific clients policies where they pay based upon vessel usage and voyages. With the ability of NG-RMP to track movement, real time, clients can be charged a premium, which better reflects activity and actual exposure.

Historical analysis using NG-RMP will allow insurance companies better understand the movements of vessels and how worldwide risk is spread.

Overall books of business are closely monitored on a real-time basis to ensure there is no concentration of activity that might lead to systemic portfolio risk. This is also very important in providing information to insurers as they look to protect their own exposures by way of Reinsurance.

Through the CCN2 contract, NG-RMP has an additional insurance /reinsurance domain module focusing on worldwide port risk for portfolios. This module monitors the exposure of an insurance company’s portfolio through the determination of vessels currently within ports worldwide and an near real time estimate of cargo type, quantity and value. Pre-defined threshold of risks for ports can be defined and alerts issued when a breach is detected.

The NG-RMP system was developed primarily for use within the operations centre of the INS and insurance/reinsurance organisations. The system has external interfaces to allow key categories of external access to the system. These are: 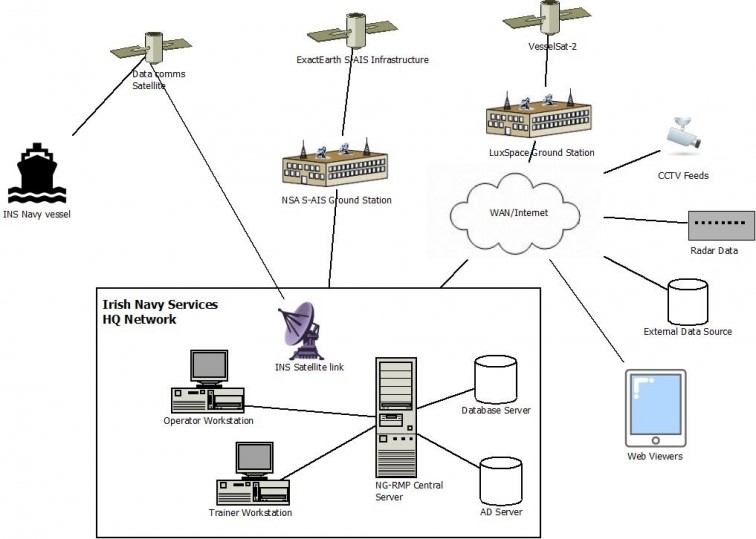 Services from three different space assets were involved in the development of the Next Generation RMP project.

Satellite AIS (S-AIS): Providing information on positioning and movements of maritime vessels. The benefit of S-AIS to terrestrial assets is that the range from land based AIS receivers is maximum 70 miles from coast. This doesn't cover the Irish coastal waters which can be covered through S-AIS systems.

Satellite Communication: Providing the communication means between the command and control centre of the Irish Naval Service and its own vessels. This provides contact between the vessels and INS HQ not possible if deployed far from the coast line.

Human Space Flight: The International Procedure Viewer (IPV) developed by Skytek for the manned space programme will be the starting point for the targeted intelligent decision support tool. Building on the advanced decision support and procedural systems provided by the IPV system will allow the NG-RMP system to offer automated suspect vessel detection with related operational procedures.

The fully integrated system had live operational S-AIS feeds that were provided by the project partners ExactEarth and LuxSpace, in addition to several ground based feeds that the INS received from a number of sources. External data sources ranging from live weather data, Earth Observation images and third-party vessel information were also deployed and available within the NG-RMP system. For the demonstration phase, the Artificial Intelligence (AI) and expert system components was configured with the latest set of monitoring and ‘vessel of interest’ detection rules provided by the INS operational centre experts.

Following on from the demonstration phase a further development through the CCN1/CCN2 contracts focusing on the insurance domain was undertaken. Tailoring of the system for several identified insurance end user needs was undertaken. This was completed with a successful demonstration phase where the system was fully operated and validated by invited insurance end users. The invited organisations were provided remote access to a cloud based deployment of the NG-RMP system to review and access the additional features and functionality.

Following on from the demonstration phase a major marketing and sales campaign has been started to promote the NG-RMP system to other potential end users within the identified market.