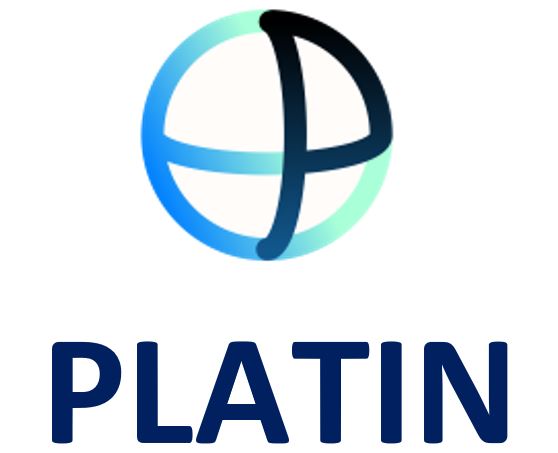 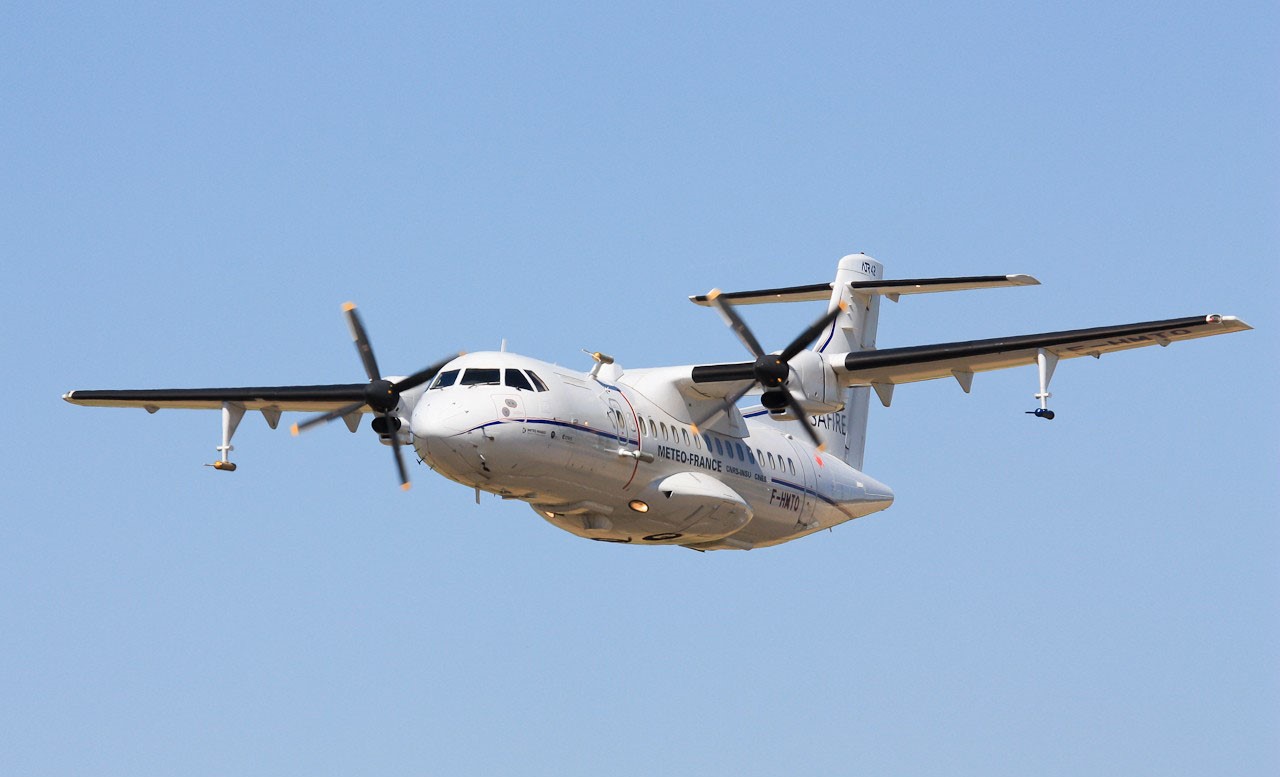 The innovative services and features offered by PLATIN include: 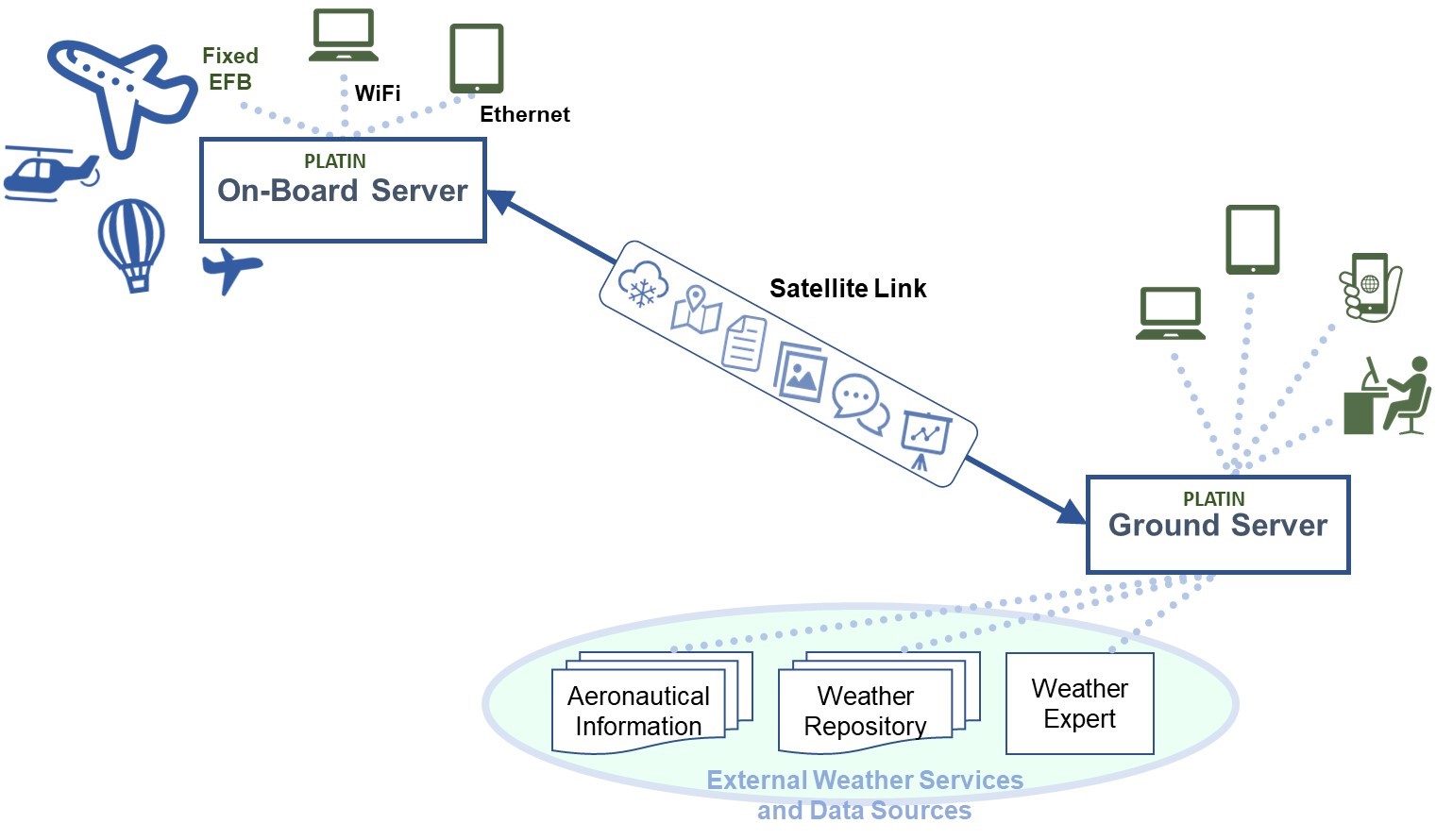 Therefore, two partners have been selected for the pilot phase of the project:

The two main components of the system are the onboard segment and the ground segment.

The onboard segment is composed of a hardware server that either embed or interface with the Satcom. This server also hosts all the PLATIN application. The application is responsible for data acquisition (for instance, video streams from external cameras or telemetry from external instruments), data optimization (compression, priority) and transmission towards the ground segment.

The ground segment provides data storage and data presentation to ground users, as well as several APIs to allow third party applications to interconnect with PLATIN.

Both onboard and ground segments host a web interface that provide an HMI to users. 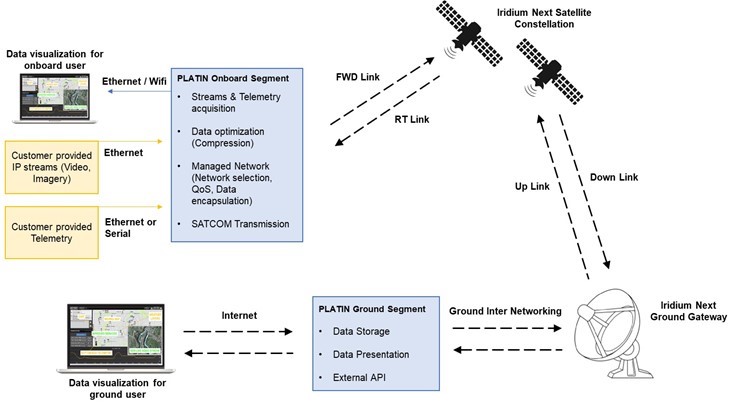 There are several space technology elements involved in the solution. The most important one is satellite communication as means for data communication while in-flight. But other technologies are involved such as satellite navigation for carrier tracking and geo-location or satellite observation, as primary source for some weather nowcast products that are intensively transmitted during operations.

SATCOM plays a central role in the overall system architecture. This is the link between onboard and ground segments during flight phases. Satellite communication provides the unique capability to offer global in-flight connectivity.

Satellite Navigation is mandatory for carrier geo-location as tracking is the most important basic feature of PLATIN system.

Concerning Satellite Observation, this is one of the main sources of nowcast weather products transmitted during operations. Satellite imagery and all its derived products (RDT for Rapid Development Thunderstorm for instance) are often requested by users as a supporting feature to the mission.

PLATIN baseline system has been developed, factory tested, and deployed for pilot operations on fixed wing aircraft and UAVs. The Final Review milestone was held with ESA on the 4th of July 2022.

Planned fixed wing pilot operations on ATR-42 have been completed, and a first customer installation deployed on Falcon-6X to support OEM Natural Icing Certification campaign. This flight test campaign has been performed during first semester 2022.

UAV pilot operations have been performed on multirotors operated by ATMOSPHERE. For the PLATIN UAV pilot, ATMOSPHERE has developed its own flight test capability, including infrastructure (UAV systems and test field), human resources (recruitment of an UAV licensed pilot), and regulatory provisions (operator license, insurance, and operations manual). PLATIN UAV pilot operations have been performed during spring 2022.