SAFETREE service represents an innovative approach to optimize the Czech Airborne Fire-fighting Service (AFS). AFS provides the airborne monitoring of Czech forests in order to secure early detection of wildfires, the prevention of the wildfire spread, and to enable airborne firefighting. However, the current system lacks on objective and actual information on conditions of forest vegetation.

SAFETREE service is based on integration of Earth Observation monitoring systems and Satellite Navigation technologies to support the AFS in the decision making on airborne patrol dispatch and routing.

The service is designed to provide actual forest fire risk maps in the needed spatial and temporal resolution via web mapping services to support the users’ decision making on the measures adoption. The improvement of the airborne patrol routing is based on the integration of the periodical forest fire risk monitoring into the flight path planning. The on-line tools to allow the users to plan an optimal path of the airborne survey.

Forests of the Czech Republic (FCR) has been identified as strategic service user after the decision of the Czech Ministry of Agriculture (MoA) to move the legal obligation to deal with forest fire prevention activities directly to the forest owners in June 2014.

Forests of the Czech Republic, State Enterprise (managed by MoA), is the main forest owner in the Czech Republic (51% of total forest land). FCR has taken over the AFS operation in June 2014 to ensure the timely fire detection and firefighting of forest fires.

Another group of the users is represented by the non-state forest owners (communities, towns, private forests, forest co-operatives, unions of small-scale owners).

Target users are from the Czech Republic.

The suitability of various approaches for the forest fire risk monitoring has been recently re-evaluated by the Czech Ministry of Agriculture. It was confirmed that the AFS represents the most appropriate method for the monitoring of local conditions. SAFETREE service is designed not to replace the existing solution but to support and enhance it. By optimization of the patrol routing and with the patrol dispatch decision support, the cost of the airborne patrol could be reduced.

Two service products have been identified and defined: 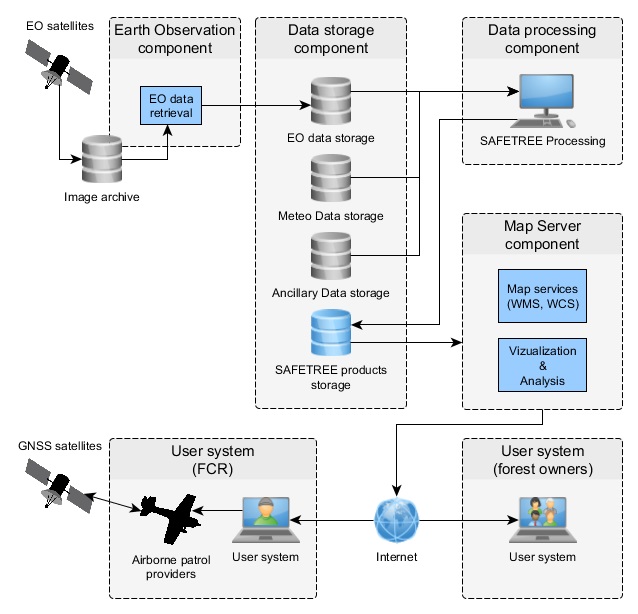 Currently, the decision making on airborne patrol dispatch is subjective, mostly based on weather forecasts and local expert knowledge, while the moisture conditions of Czech forests are not yet monitored. However, the spatial variability of precipitation and vegetation moisture content play significant role in the spatial distribution of fire-prone areas and the discrete meteorological measurements cannot provide detailed information on the spatial distribution of the forest fire risk.

Actual forest fire risk maps also enable optimized selection of the airborne survey path and targeted airborne patrols. In this way the probability of the forest fire detection will be maximized and the AFS costs (flight hours) minimized.

On-line tools allow the users to manually select the hotspots on the actual forest fire risk map, define the points of flight path for intended airborne survey, and generate and export an airborne patrol flight plan. Satellite Navigation technology will be used for routing of the airborne patrols along the planned optimal path.

The proposed service benefits from integration of Earth Observation monitoring systems and Satellite Navigation technologies. The activities were focused on the selection, processing and evaluation of forest vegetation moisture content indicators, and on practical testing of the navigation procedures and data transfer.

Due to the positive feedback received by the users and the confirmed viability of the service, the team is in the process of preparing a demonstration project which shall be supported by the national funding.