The objective of the project is the development and validation of a system for the provisioning of an integrated maritime communications service.

The system will be based on a high performance VSAT component supporting advanced service features like bandwidth on-demand provisioning at fleet and application level, store & forward data transmission and transparent switching of the user traffic between the VSAT component and complementary satellite and wireless systems.

The SASS@Sea system will be validated during a four months pilot phase by four tanker vessels operating in the North Atlantic, US East Coast and Baltic Sea regions.

The system will support the following features:

The scope of development includes:

The SASS@Sea multi services gateways in conjunction with the Service Management System will be designed as service platform which will be open to integrate different, also future networks.

The project developments will be validated during a four months pilot phase by tanker vessels operating in the North Atlantic, US East Coast and Baltic Sea regions.

The SASS@Sea system provides the following benefits with respect to the above mentioned issues:

The following diagram shows the high level architecture of the SASS@Sea system. The subsystems and components which are developed by the SASS@Sea project are highlighted in blue. 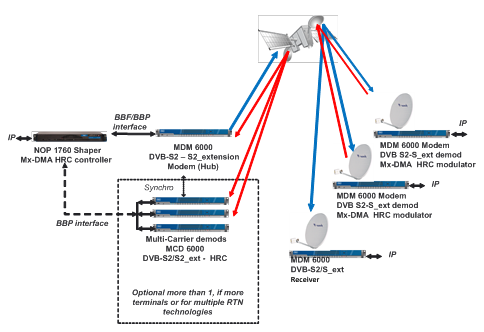 The SASS@Sea service is providing two-way IP connections between ships at sea and the shipping companies at shore. Direct connectivity to the Internet and public telephone networks (PSTN) is also supported.

The service is based on a high performance VSAT component. The main functionality of the Onboard and Shore Multi Services Gateways is to identify and classify the ship and shore originated application traffic and to control the transmission via the VSAT system according to bandwidth assignments imposed by the Service Management System.

When the ships are outside of the VSAT coverage, the user traffic is switched to alternative maritime satellite systems like Inmarsat or Iridium. Within coastal areas or in ports, 3G/4G mobile networks or WiFi hot spots can also be used. The OMSG and SMSG are routing the traffic transparently via the different networks depending on availability and user defined preferences.

The Service Management System is managing the bandwidth within the VSAT system and is assigning and re-assigning bandwidth to the application traffic on-demand using IP based signalling protocols. It will supports advanced beam switching functionality in conjunction with the OMSG onboard of the vessels, not only depending on the vessel position, but also on other criteria such as heading (antenna blocking) and bandwidth utilisation in the different beams.

Unlike other existing maritime VSAT systems the service management mechanisms is independent of the two-way satellite IP platform used. This architecture enables the integration of future networks such as the Inmarsat Global Xpress satellite system into the SASS@Sea service platform.

The project is addressing the following issues with current maritime VSAT services:

The project was completed successfully end of 2013. The operation is being continued for beta testing with the pilot user and other friendly users. Subject to the results, the roll-out of the fully operational service is planned until mid of 2014.