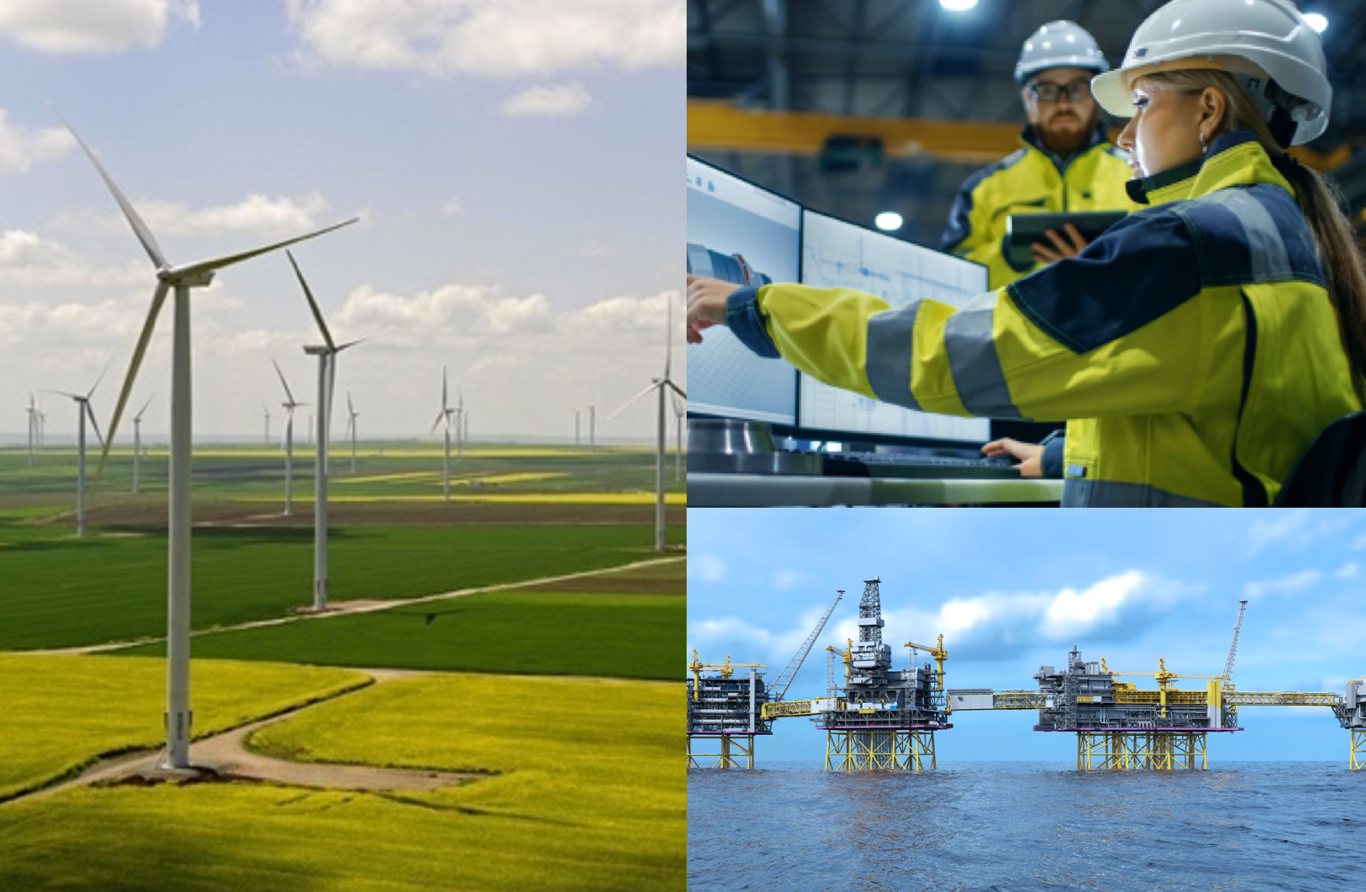 The unexpected stop of a machine that is part of a larger system or process is usually orders of magnitude more costly in time and money than planned, preventive maintenance of the machine would have been. The SatDAPT system can learn the correct patterns of behavior through classification of acquired values during normal functioning and can distinguish situations where acquired values combine into a set that indicate the potential for abnormal operation. The goal is to detect an increased probability of failure in the future, that is a possible future equipment failure, based on combinations of parameter values which may still be within the operational limits, and then to classify these situations in categories linked to the type of defect forecasted and the kind of maintenance needed. While the classification itself is done by the AI component of the system, a human expert may still be involved in the process of mapping the various classes of values determined by the AI to actual real failures that have at some point occurred in operation in some other deployment.

The system targets two classes of users: one class consisting of companies which operate remote production facilities such as offshore oil platforms and wind mill parks which aim to implement the capability of failure prediction for the purposes of optimizing their operations, and the other class consisting of equipment manufacturers which aim to embed autonomous failure prediction capabilities into the equipment itself, along with positioning and communication capabilities in order to improve the reliability and therefore the value of their equipment.

For both categories of users, the business proposition is built around a model where the user acquires the necessary equipment (sensors and Gateways) as CAPEX and then contracts the cloud services as OPEX. CDS offers the cloud services using a recurring fee calculated per sensing device that is being managed by the CMS. One problem that users face when interacting with cloud technologies is that providers are offering pricing plans which are notoriously difficult to estimate in advance. CDS provides users with a pricing scheme that is easy to comprehend, abstracting away all the complexities of a cloud deployment such as processor cycles and MB of data transferred.

The value received by the users consists of a) the increased uptime of the machinery, due to the reduction of the number of failures; and b) the reduced costs of down time, due to the avoidance of unscheduled interruptions. The second component becomes especially significant when considering the potential costs associated with an unscheduled interruption caused by an unforeseen equipment failure.

There are many physical parameters that can be used as inputs for a Predictive Maintenance (PDMA) system. Vibration, temperature and pressure values carry important information that can provide insight into the health status and probability of future failure of industrial equipment. Depending on the industrial process considered, some physical values carry more information and are therefore more important than others. By far when considering equipment with rotating or otherwise moving parts, measuring vibration and analyzing the corresponding frequency spectra yields the most valuable results and allows for the most accurate failure predictions. Vibration based PDMA relies on analyzing input data generated by sampling acceleration values on one or three axes. 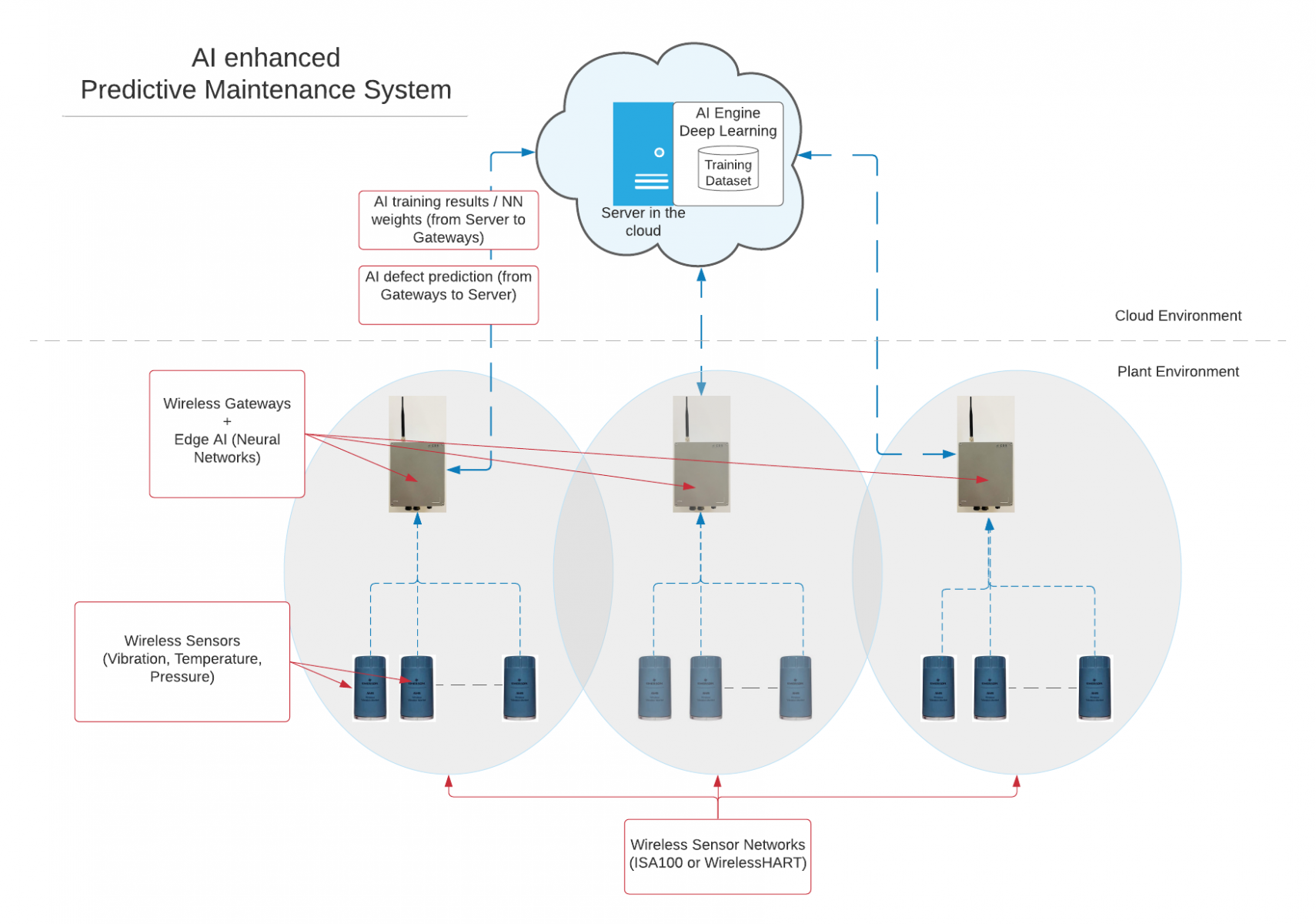 SatADAPT operates at three separate levels, differentiated by the physical location of the components and by their functional roles:

Field data acquisition is performed by Wireless Vibration Sensors which have the capability to sample acceleration values and which can pre-process the acquired data into a frequency spectrum and send the result over a short range wireless network to a controlling Gateway.

The sensor data is captured by Gateways, also known generically as Edge Devices, which operate at the confluence of field installations and the cloud applications. The Gateways serve as bi-directional communication hubs, effectively connecting the Field Devices to the cloud, but their function is expanded beyond enabling communications, by adding two critical roles: local data processing and local control.

The cloud applications are grouped generically into a Cloud Management System (CMS) which is the central component of the system and fulfills a variety of roles. The CMS is responsible for receiving, storing and archiving the incoming process data and also for providing a means for pushing configuration parameters to the Gateways and Field Devices.

The communication over the Internet between the CMS and the Gateways is using either a 3G/4G cellular modem or a satellite connection which can be implemented by using a LEO constellation or a geosynchronous communications satellite. For mobile equipment operating in remote areas, a satellite connection is the preferred and sometimes the only means of connectivity to the cloud CMS. In the case of offshore installations, even though 3G connections might be available, they can get really expensive so satcom is a better choice. Because the architecture proposed is based on the concepts of "fog computing" and "edge AI", it eliminates the need for a high speed low latency connection to the cloud and thus allows for the use of low cost LEO satellite services, which are cheaper and more convenient to use than GEO satellites.

In addition to satcom, GNSS timing is another space asset critical for the correct functioning of the system. Correct, synchronized timing is essential for aligning timestamps of sensor data acquired by different field deployed Gateways and performing cross-system event analysis. It is also needed in the case of redundant configurations which are often required in hazardous environments.

The project has started in June 2020 and was finalized in January 2021 with the completion of the technical and commercial feasibility of the concept. The vibration sensors have been designed and critical technical aspects have been addressed through analysis and rapid prototyping. The satcom link was tested using a LEO constellation and integration of GNSS functionality for positioning and timing was prototyped. About 20 potential customers were engaged, which provided requirements and interest in the solution. Based on their inputs, the business plan for the new service is now defined. The project is now ready to go into the next phase, which is the development of a demonstrator.