The main objective of this project has been to develop an online cloud based service that allows integration and analysis of Earth Observation (EO) and forest inventory data by using a simple user interface. One of the key objectives of this platform is to provide the forest owners and management companies with easy to use analysis tools that help them to make better decisions and to demonstrate that the use of remote sensing data can successfully facilitate the field data collection.

The general objectives and goals the SATForM3D are:

The specific project objectives are the following:

Forest Mapper is accessible through a web-based platform, with a service offer provided in an descriptive and visual manner and which includes tools for:

The SatForM 3D demo project was focused on demonstrating the integration of Satellite Earth Observation (EO), Satellite Navigation and ground based remote sensors (TLS) for fully automated forest inventory analysis. On top of this, Forest Mapper architecture maintained the capability of including data from forest surveys based on manual data collection (calliper and hypsometer).

Within the SatForM 3D project different sensors have been tested (Bing Maps, Geoeye, Worldview, Cartosat and aerial LiDAR) -" in order to assess the suitability of each sensor for the different EO analysis included in Forest Mapper (see above). In addition, datasets from TerraSAR-X were studied by the University College Cork (UCC), with not conclusive or useful results for the analysis proposed.

The performance of the different sensors was similar. Bing maps was more detailed than the rest because it has more resolution (0.35m) than the EO sensors (0.5m), however Geoeye and Worldview have been more reliable than Bing detecting vegetation because the Near Infrared band, this is a requirement for the change detection tool.

Cartosat stereo image and LiDAR have performed well and they are more reliable in forest detection due to the height information. However, broadleaf and conifers were misclassified in some cases. In addition, Cartosat needed some corrections using the Digital Terrain Model (DTM) from LiDAR as reference.

Based on these results and the user preferences, Bing is a preferred solution in the immediate future due to the more detailed result and the immediate accessibility to the data source. A decisive factor for this choice is that currently the Bing imagery available for Ireland is only one year old, however this can change in the future because the Bing Map acquisitions is uncertain. Geoeye has been the second choice from the users, in addition, this sensor is required for change detection. Due to the Bing Maps acquisition issues is expected that Geoeye preference would progressively increase. LiDAR demonstrated that results based on height information (DHM) can provide successful results, however the users did not selected this as a preferred option because the current availability and cost.

The use of the GNSS device is a requirement for most foresters in order to record position of the forest field measurement. During the SatForM 3D project, different high precision GNSS device were tested.

Three GNSS devices were tested: (i) Trimble GeoXT with Floodlight, (ii) U-blox and (iii) Asus Nexus 7. The fist two devices are categorized as high precision devices with sub-meter accuracy. The last GNSS receiver is the default received built in the Nexus 7 tablet for comparison purposes.

The results show that GeoXT have a lower Horizontal Dilution of precision (HDOP) than the other two devices in open sky, however under forest canopy U-Blox have a better accuracy in HDOP. According to this U-Blox was preferred under forest  canopy, therefore selected as the GNSS device used in this project. 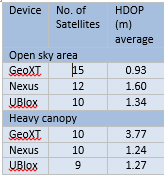