Vessels at sea must communicate their position and follow the course they have provided to the Authority. Their activity can be monitored via AIS, radars and satellite; but what about the activity of people on-board? Nowadays everyone carries a mobile phone; by using mobile phones detectors it’s possible to understand whether and how many people are present on-board a vessel at sea or near the shore.

This information, correlated with AIS and Satellite data, is used to provide a more comprehensive picture of the maritime situation, allowing Coast Guard and Navy to spot abnormal activities or emergency states.

SeaSearch is a powerful tool to assist investigation near shores regarding suspicious behaviour of vessels and people on-board.

Navy, Coast Guards, as well as Lighthouse Authority may need additional investigation tools to monitor the coast and the near sea, to spot unusual human activity.

Sometimes, in fact, small vessels can be sailing with inactive AIS system, or having people on-board that appear to be present, at different time, on other similar boats, following the same course back and forth with no apparent reason. Moreover, there could be people activity in areas where no boat has been detected or reported present.

Those kinds of situation can’t be spotted by the traditional means of surveillance used by CoastGuards and Navy, yet they could be proof of abnormal activities going on in the area under monitoring.

There is one thing that those scenarios all have in common: people are used to carry (and use) their mobile phones everywhere, especially when there’s a need to communicate in unofficial ways.

SeaSearch offers a way to detect these activities and, integrating Satellite and AIS data, to build a comprehensive Maritime Situation Picture.

SeaSearch consists of a processing centre whose core is the fusion engine that interfaces with 3 different data sources: the phone detector system and its sensors, EO data like SAR and AIS system for maritime traffic.

The engine acquires data from the phone sensors and correlate time and location with vessels’ information from AIS and images from Satellite. The full picture of the maritime situation with detected phones, vessels’ image, position, course and any other relevant information is visualised on an interactive map: the end-user can, through this interface, receive alerts on anomalous activities, dig into the history of detections for the devices reported on-board, explore the area to highlight recurring patterns. Suspicious phones and vessels can be marked in order to activate notification whenever new activities are registered for such targets.

SeaSearch can be set to export alerts and processed data into a Command & Control Centre’s platform, where the full integration with existing monitoring systems can be performed. 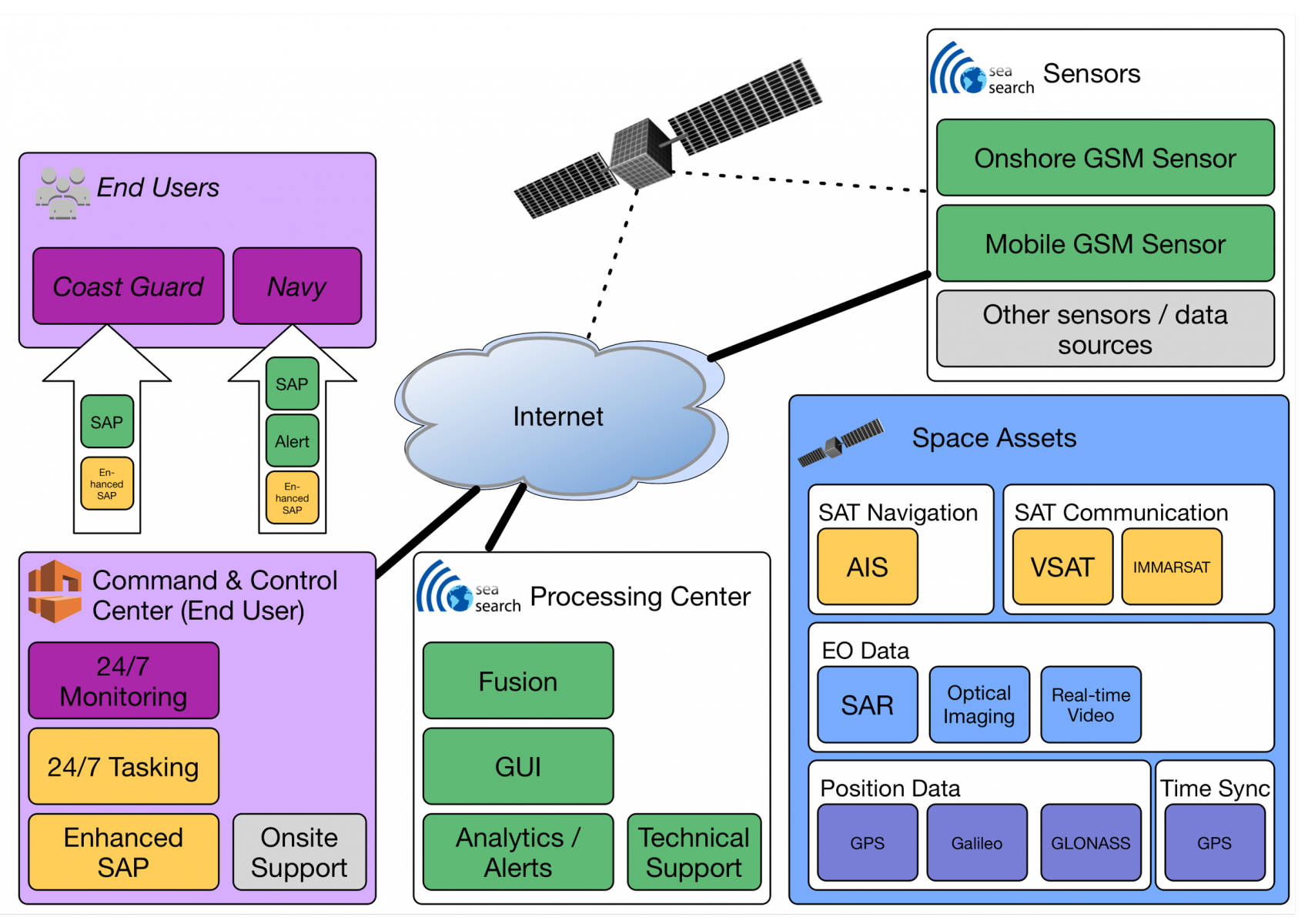 Synthetic Aperture Radar (SAR) and optical satellite imagery have been widely used in maritime surveillance and monitoring applications. SAR data proves particularly useful as it is not affected by meteorological conditions or the time of day therefore allowing all-weather and day/night monitoring.

Sea Search uses dual polarization data from the Sentinel-1 satellites, which are part of the EU’s Copernicus programme. The SAR images are used as to verify the presence of a vessel at the time of a spike in mobile sensor detections. This is an extremely effective method of identifying the presence of a vessel in the proximity of the sensor, especially if a vessel does not have AIS turned on. A ship detection algorithm is then applied to the pre-processed SAR data. The ship detection algorithm is used to validate the results of the cell-phone based ship detection system. This results in an output report containing the location, orientation and length of each vessel within an image.

By bringing together mobile detections, AIS and SAR vessel detections, Sea Search provides a platform for monitoring and tracking abnormal activity at sea.

The fusion engine capable of correlating mobile phones detection and AIS and Satellite vessels detection is up and running, acquiring data from the 8 phone sensors located on the south-eastern coast of Ireland. The algorithm that processes space data and images to identify vessels in the Irish Sea is at the final stage of fine-tuning.

The situation awareness picture is visualised by the end-users on an interactive map that allows real-time data retrieval from the fusion engine and connects it to the historical analysis, performed at specific points in time or in selected geographical areas.

Several use-cases prove the strength and reliability of the system in detecting situations, which the traditional techniques wouldn’t be able to point out. For instance, a small boat that doesn’t appear in the AIS system, can be still detected via the phones of people on-board and cross-checked with Sentinel1 images.