Fruits supply chain is long and complex, numerous stakeholders are involved among others:  farm input suppliers, farmers, collectors, processors, transporters/shipping companies, retailers/food service providers and the government and authorities. Several steps are included moving from upstream (production) to downstream (trade, storage, processing). SFCS is an important link of the whole chain, because it allows to estimate 1 to 6 months in advance which of the fruits will be produced by farmers. Our proposal (SFCS) is addressing the problem concerning the harvest logistics and its transportation to the receiver. In practice, the question about the harvest size reveals on several production stages. The first stage- inflorescence and fruit creation. At this moment, the producer has to estimate the harvest size to contract the receipt of the fruit. Refrigerators and processing companies that sign contracts would like to have a good certainty about the number of received fruit.

For distribution planning, it is required to determine the number of transported product and its receivers early enough. SFCS will optimize fruit distribution and will allow a change in the communication model of fruit producers and consumers (distribution companies, refrigerators, supermarkets, etc.). The main problem that the project will resolve is the current information about the size of future production.

By developing the project we want to focus on apple makers because of their largest share in the fruit market. Apple harvest in the European Union amounted to 12 million tons compared with 12.3 million tons in 2015, according to the World Apple and Pear Association (WAPA), an international organization promoting apple and pear production worldwide. In Poland, the production reached 4,1 mln of tons in 2016 which gives the highest score in the whole EU.

The application itself should include: software intended for fruit farmers (there are 156 995 fruit farms in Poland) and intended for wholesalers and fruit purchasers (20 largest fruit procurement and purchase points).

According to the orchard owners opinion it is important to focus on the crucial aspects of the application like it doesn’t generate additional activities for the fruit farmer and a high level of harvest estimation accuracy. Additional modules (e.g. weather forecast, information concerning current purchase promotions) are an added value, but they shouldn’t interfere with the basic application functionality. The graphic interface itself should be intuitive and don’t cause any problems during fast and sometimes jumpy SFCS operator actions.

Farmers expect production information (the number of apples harvested). In addition, fruit growers indicated that information on the quality of fruit may be useful information.  This idea has a large market potential. Apple farmers have confirmed the possibility of a wider use of SFCS - over 60% of respondents expressed a desire to take advantage of the opportunity.

Poland and optionally other countries of the Europe.

Client module is a dedicated application for acquiring image and geo-location data acquisition -  a compilation data obtained from mobile device sensors  (image camera and EGNSS receiver). Modules of: storage and early data processing, data analysis, payments, reports making, sharing reports for customers are integrated in the frame one logical computing machine or clouds solution. The mention solutions give possibility for better application scalability. The administrative and supervisors module is a dedicated application to:

Data transmission module is a medium (with different characteristics: WiFi, LTE, 3G - depending on the analysed area and available infrastructure) connecting mention above components based on the TCP/ IP protocol. 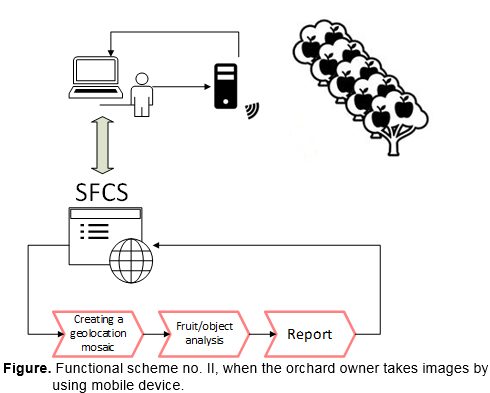 Satellite Navigation (EGNSS) used for the geo-localisation of the following assets: 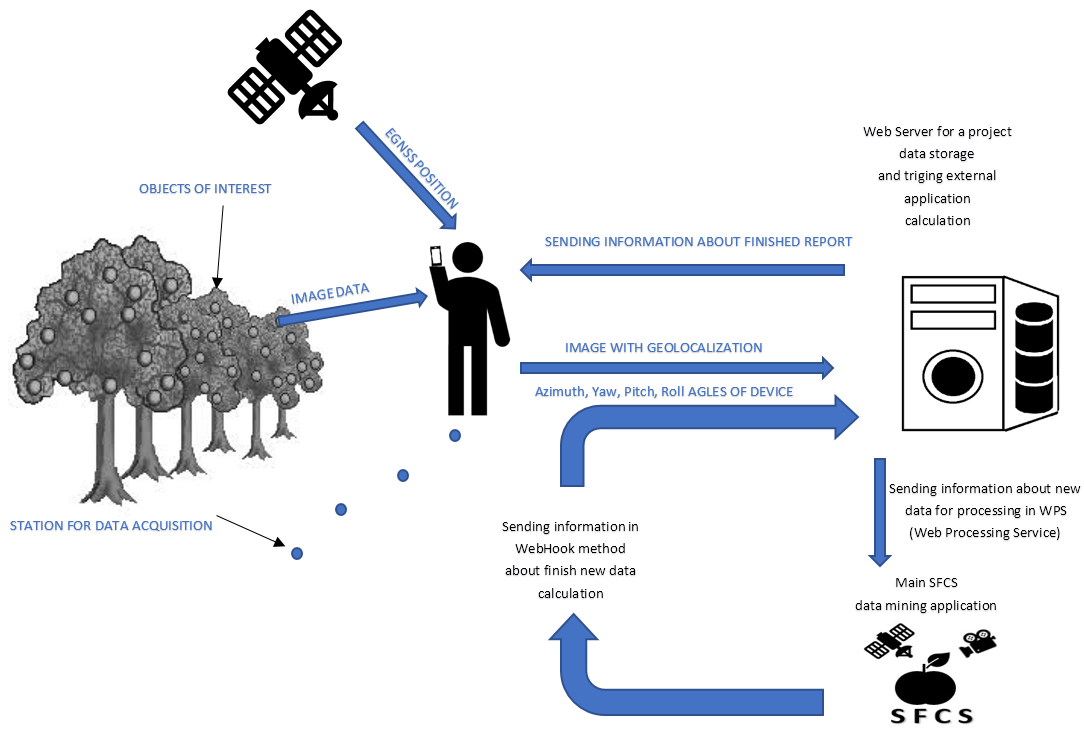 The project was carried out on the basis of:

As part of the feasibility study, technical assumptions of SFCS were also developed, on the basis on which a prototype of the several separate modules of SFCS were created (especially: computer vision for fruits detection).

A business plan was also developed to support costs, methods and time to develop a final Satellite Fruit Control System. 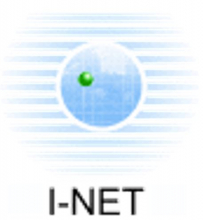