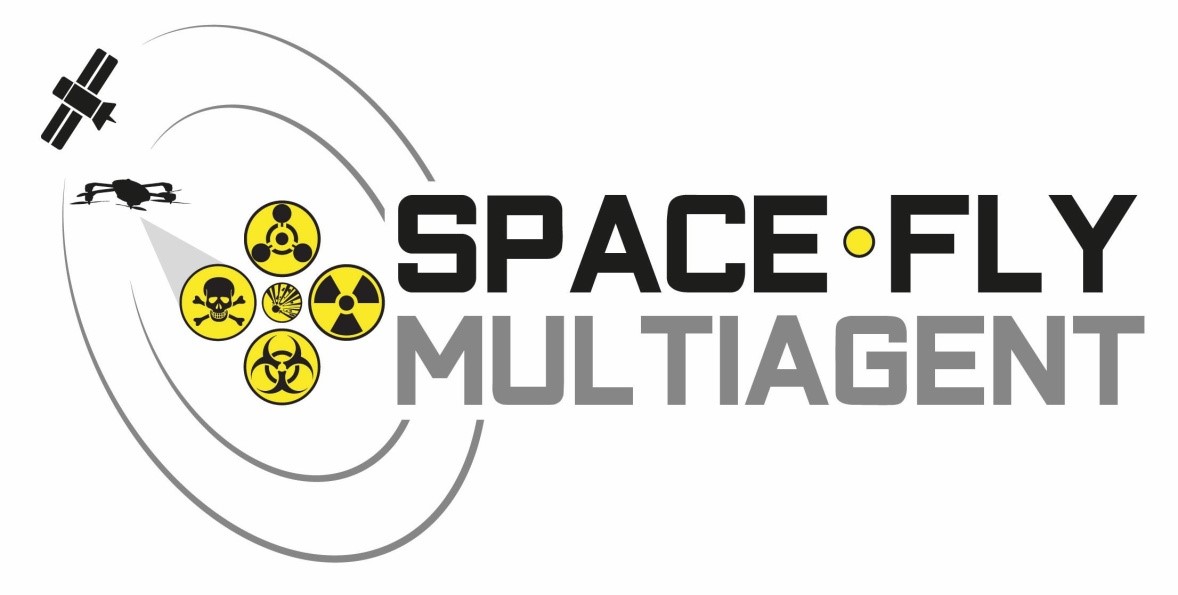 The SFM service aims to combine the data provided by CBRN sensors (chemical, biological and radiological), whether these are placed on unmanned vehicles (aerial or ground) or handled by operators, with those coming from optical sensors (video and photo, also in the infrared and thermal fields) placed both on drones, on satellites, or on ground.

In most cases the phenomena of release of CBRN agents are generated by an explosion, or by fire and therefore are accompanied by a severe damage to technological systems.

The system-service, supported by mathematical models studied ad hoc for this project, delivers real-time reworking of the data available transforming them into useful information such as, zoning of the scenario, and make them available to the commander on the field.

Such re-elaborations are then shared and made available to different stakeholders first of which rescuers and first responders on the field, also to any actor being part of the multi agency system appointed to resolve CBRNe event, and lastly to the part of the population potentially exposed to such an event.

The use of the service is designed to be made available also as a preventive monitoring system for reporting any anomalies or identification of precursors, for instance during a big event or at a critical infrastructure. SFM can also works as a post-event system to support reclamation operations, determination of cases, forensic audits and type analysis.

The SFM system, due to its intrinsic characteristics is more focused on large scale impact scenario (like the ones involving a C, B or R agent) taking place in open environment, rather than small scale one, localized in a confined space.

The results and technologies that can be derived from this project can be adopted not only by fire-fighters but also by rescue services and medical services, by environmental agencies and private companies operating in aftermath of a CBRN disaster, and operating in the field of safety and security.

Important and current dual project derivations can be CBRN setup of the Army as well as the use of the system by agencies such as OPCW for inspection in war scenarios or by the Navy in theatres of massive migratory phenomena.

The involvement of reference users is implemented in detail validating the concept expressed in the feasibility analysis by the Italian National Fire and Rescue Services and via subsequent implementation phases leveraging the CBRN user communities of the EU's DG ECHO, and other EU project partners.

The primary services identified by the stakeholder analysis are reported below.

Service 1 (S1)   REMOTE SENSING AND DATA COLLECTION. Remotely guided sensors data acquisition (mostly from UAVs or ROVs) for real time event characterization and monitoring of the scenario evolution in the area of operations, with the inclusion of satellite EO data support when available.

The Figure represent the SFM data collection process and analysis: to present time the zoning (delineation of risk zones) around an emergency area impacted by a critical event is made by first responders manually. 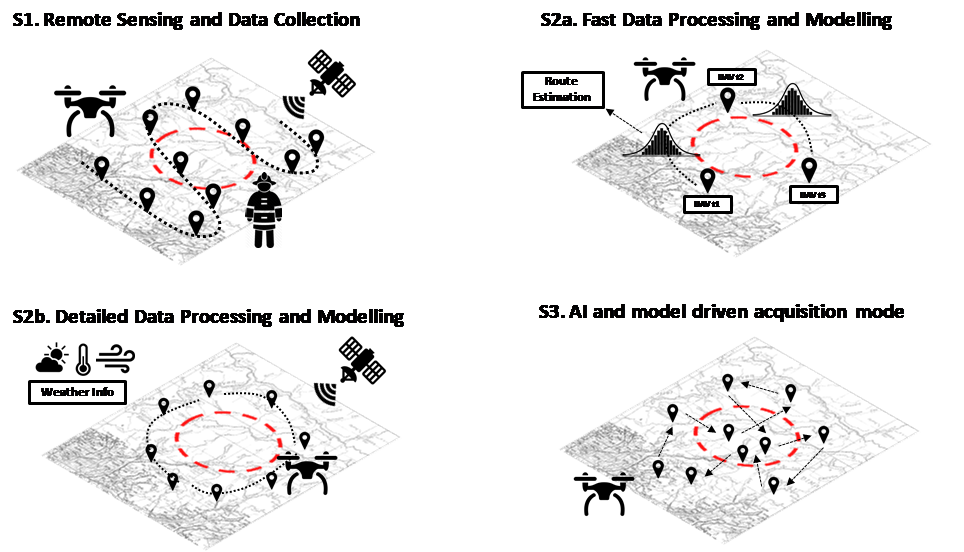 Primary targeted users come from the Italian Ministry of Interiors, and from Italian agencies working for the military forces an in support of environment protection agencies. In the current phase, the project is opened up to the dialog with a set of EU actors.

The project is being currently evaluated by DG ECHO as a part of the EU Civil protection mechanism, into the so called resc-EU response capacity.

The SFM project consists of the creation of a centralized IoT system (i.e., Internet of Things) equipped with a series of software systems capable of transforming and inputting data acquired from certain configurations of electronic devices (functional to the specific mission to be performed), in risk maps in support of the decisions of the Commander or the analyst present on-field. 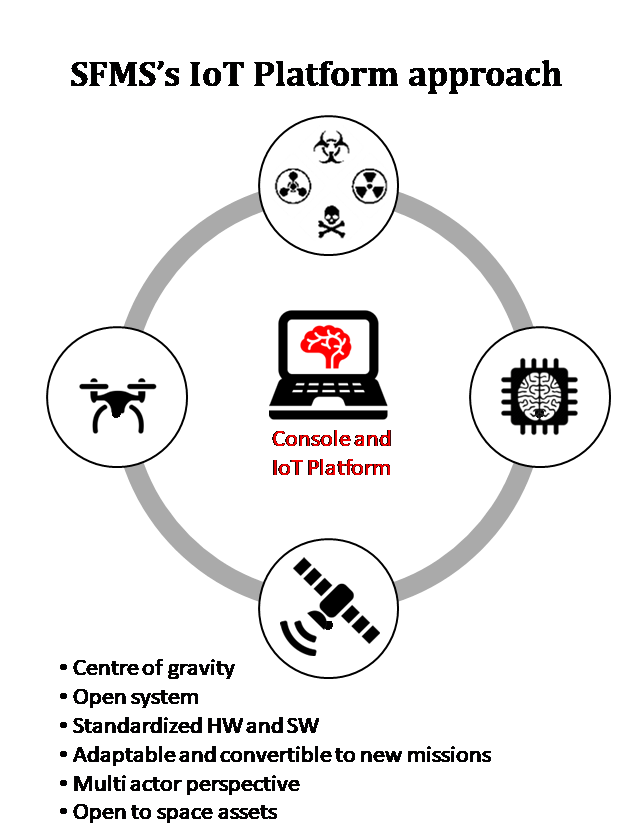 Fig. 2: Centrality of the SFM management system console with regards to the ecosystem represented by UAV, satellite, CBRN sensors, and software for decision support  markets and technologies.

The main system is based on the realization of a hardware unit capable of delivering the service and interconnected with already identified elements (built by manufacturers of hardware systems) of which drones and satellite location and mapping services are fundamental parts.

To the present time, 20 typical missions-related configurations, chosen in the fields of emergency, security and public safety, have been analyzed.

The system is designed to be installed on an intelligence unit called Advanced Command Post (ACP), a van equipped with telecommunications and situational analysis tools, deployable near the area hit by a large or medium scale event.

The service concept envisions to create a complete system of rapid data acquisition,

and processing promptly deliverable to users while facing a CBRNe environment. The service envisions the integration of one or more of the following key enabling technologies:

1) A flying Segment composed by:

- A multi role light-UAV (less than 25 Kg) with BVLOS and critical  capabilities, and able to fly during adverse weather conditions.

- Interchangeable Payloads depending upon mission specifications and by the threat type (i.e., B, C or R).

2) A ground segment, composed by:

- A data processing and Gateway Station (DGPS), available locally in the area of operations, interconnected with the UAV and other locally deployed sensors, in charge of acquiring data in real time, process them to support characterization and monitoring of the event, receiving remote provided information (like EO images),  as well as data distribution to local and remote users. The DGPS can also support the running and data usage of mathematical models (see 4) locally.

- A deployable system capable to provide W-Fi connectivity in an area of at least 500 m2.

- BLOS communication system mounted onboard of the UAV unit to enable flight over the line of sight; 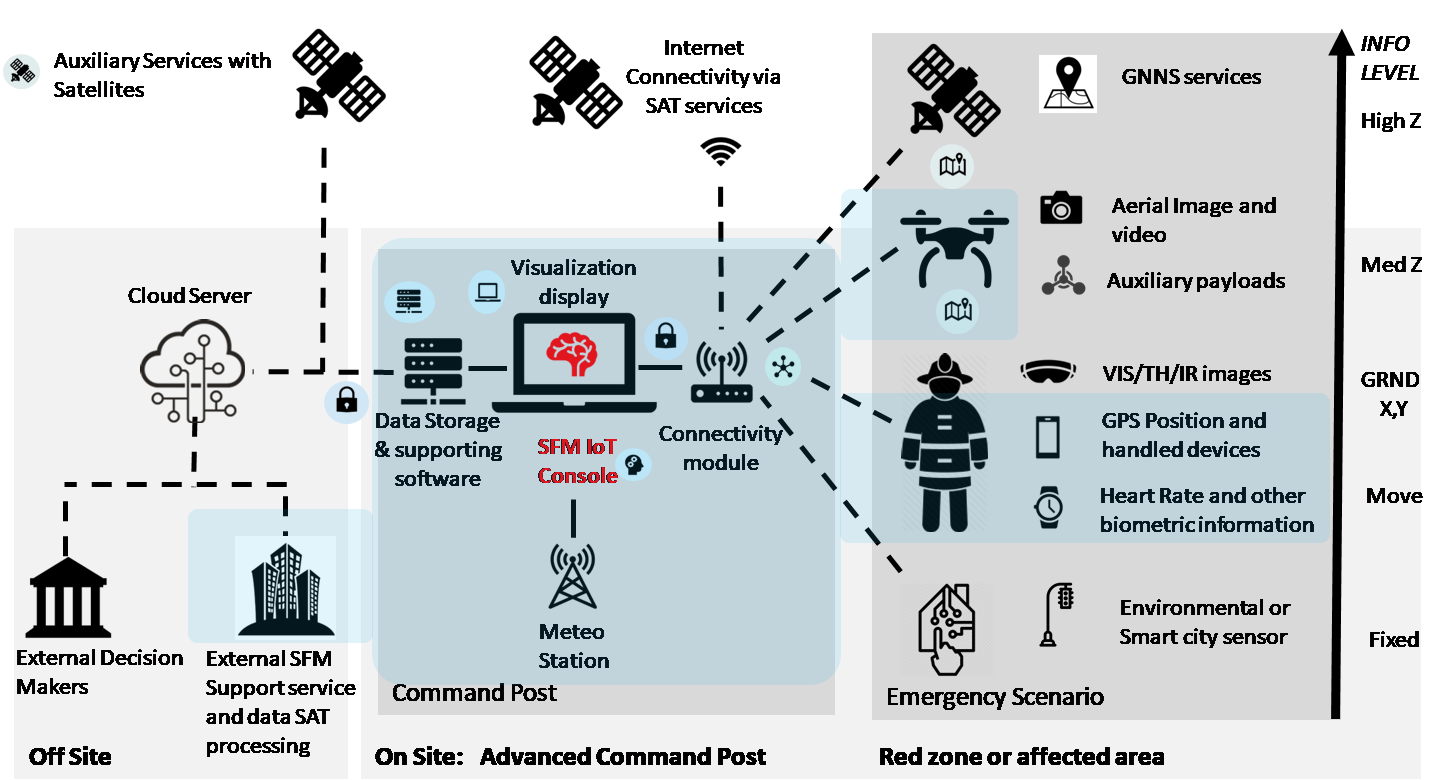 Fig. 3: The SFM ioT console, the different layers at different quotes of data acquisition systems, the connectivity module and other supporting modules and the cloud server or central management center that in remote provides auxiliary services.

The main qualifying feature of the proposed concept is the combination of (i) first responders’ procedures (SOP) with (ii) ground and space-based services, (iii) agents’ dispersion models and (iv) innovative technologies represented by high safety UAVs/ROVs equipped with payload for detection and sampling.

UAVs and agents’ dispersion models introduction results in a leverage of the Space Assets data utilization in a mutual virtuous cycle including the following innovative features:

The following figure reports the visualisation that is being thought as an output of the envisioned service resembling all the above capabilities. 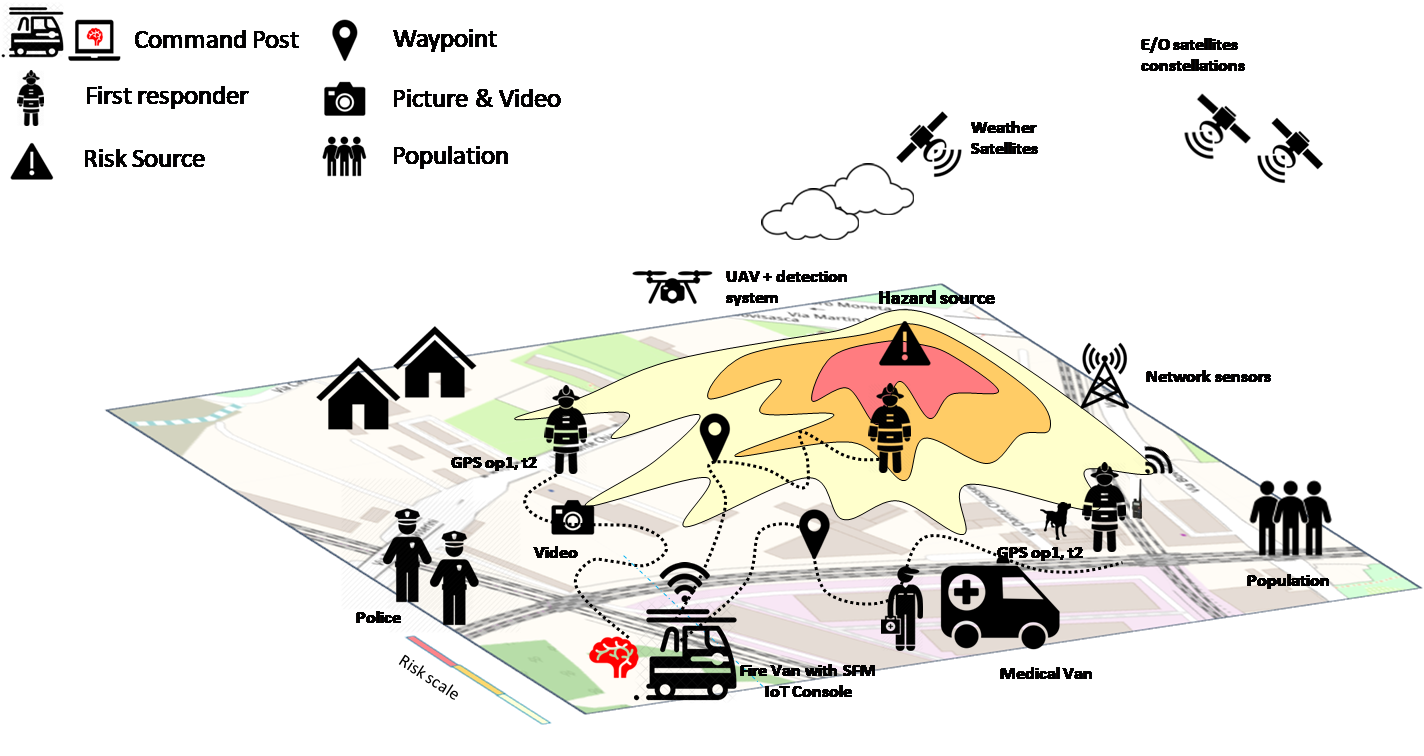 Fig. 4: Visualization of the flying elements on ground responding to a CBRN emergency. The SFM console interconnects these elements and share information with the inter-agency response system on ground.

The Space Fly Multiagent Feasibility Study has been completed and the Final Review was held in May 2019. Milestones executed from March 2018 to May 2019 are reported below. 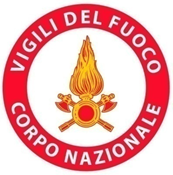