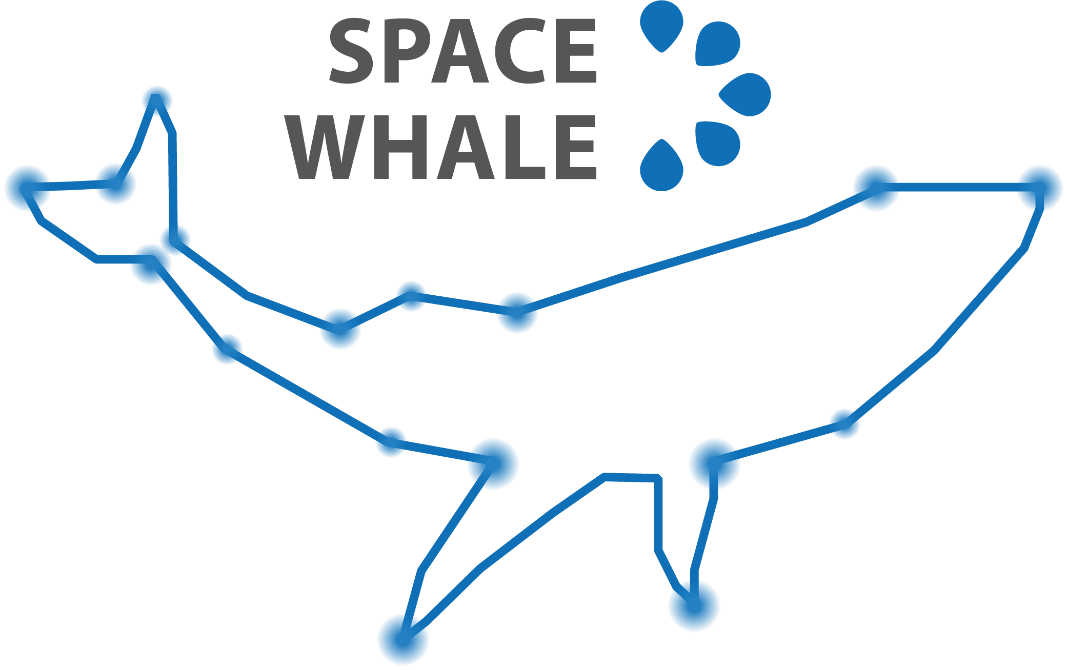 Whales are a highly mobile and wide-ranging species. The knowledge about the presence / absence and distribution patterns of large whales is crucial for conservational actions, ecological questions and planning duties for marine areas. A considerable effort has been made and is still ongoing to study the world’s oceans for whales with traditional ship- and aircraft-based surveys. And yet, only a small part of the global seascape is investigated either due to the limited range of these methods, the limited financial resources of aerial and ship surveys, or due to inaccessibility of the area.

SPACEWHALE is a service that is specifically designed to detect large whales in large focal sea areas based on very high resolution (VHR) satellite images. Objects are detected and identified when applying the well-trained SPACEWHALE algorithm to several thousand square kilometres ocean. Our data is subject to a highly robust quality assurance process as detected objects are reviewed by our expert team. We provide stakeholders that are in need of population assessments of large whales in predetermined areas a monitoring that is very well documented and can be reproduced at any time.

The SPACEWHALE service can benefit globally distributed non-governmental organisations, academic and government institutions, and private companies (e.g., oil and gas or tour operators) who are engaged in global studies or monitoring efforts on large whales, particularly in open ocean environments that are inaccessible to traditional survey methods. These users generally require:

Typically, users will require a final report detailing abundance and distribution of identified large whale species, as well as: 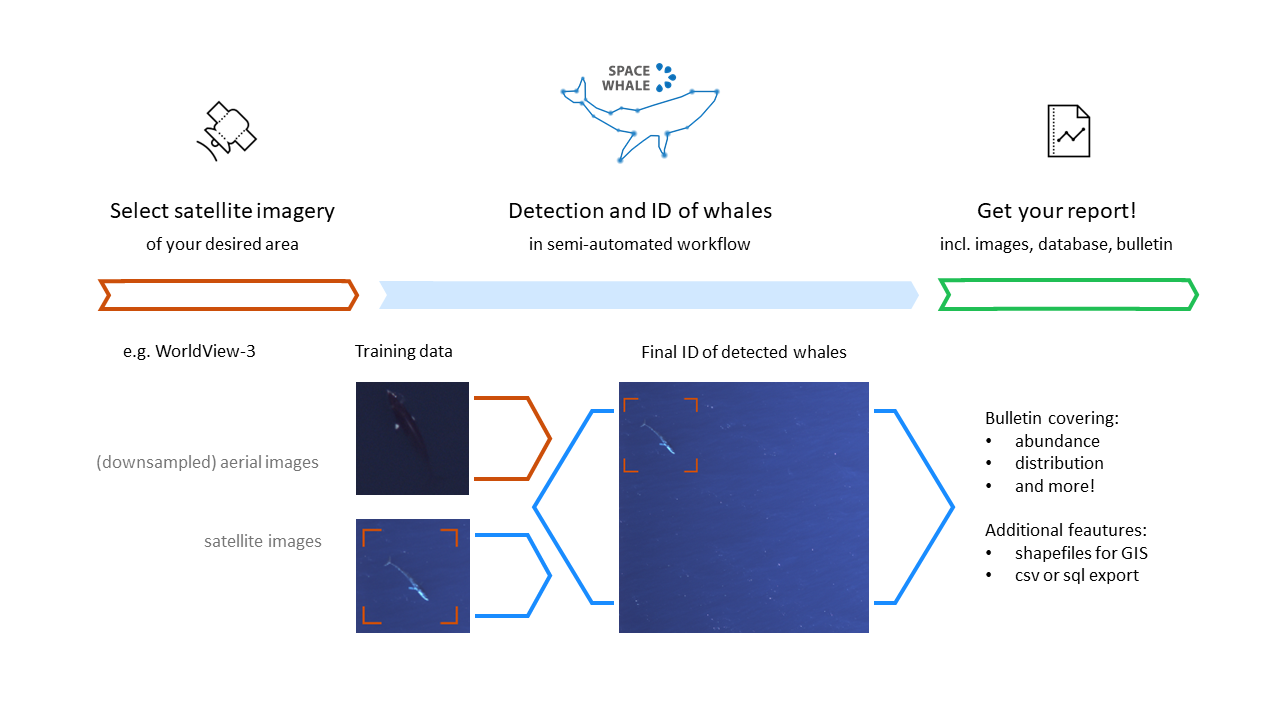 Once we receive the user-defined area of interest, we work with satellite imagery providers to obtain appropriate imagery.

The SPACEWHALE algorithm is run against that imagery via our basic workflow following a protocol that detected objects are examined and ID’d by our expert team of reviewers to ensure a high level of data quality.

A final report is generated and delivered to the customer showing abundance and distribution. Custom-tailored deliverables such as latitude and longitude values are noted for positively identified whales. ESRI shapefiles, CSV formatted data sheets and SQL databases can be generated from this for user ingestion.

The identified whales are added to the training database and enable a steady improvement of the algorithm’s performance.

SPACEWHALE uses earth observation data and takes advantage of the latest in satellite imaging technologies. It leverages data from the Worldview-3 sensor from Digital Globe (Digital Globe, Westminster, Colorado), which provides VHR satellite imagery with a ground sample distance of 9.4 pixels per square meter for a 31cm panchromatic resolution. This resolution has been shown by the SPACEWHALE algorithm and previous work by others to be acceptable for identifying large whales in the open ocean. Beyond that, the high resolution (e.g., a 15m long whale will be ~48 pixels long on a 31cm VHR image if fully surfaced) potentially enables the detection of specific body features (e.g., the fluke or colouration) for identification to species level.

This usage of satellite technology has the ability to greatly increase the total global ocean surface area surveyed for large whales. This means that we can potentially improve our knowledge of the distribution and abundance of charismatic and ecologically important whales. Moreover, it allows us to bypass the risks of ship or aerial-based surveys which can be delayed or cancelled due to weather.

The SPACEWHALE Demonstration project was launched in September 2020 and was successfully completed in June 2022. It was the consequential continuation of the successful completion of the kickstart activity running from April to December 2018.

During the SPACEWHALE Demonstration Project, we focussed to scaling up our training database with our first projects and to identifying alternative monitorings and sensors for overcoming challenges and restrictions. Our applications proved successful in several countries with various whale and wildlife species: During our calibration study in the Mediterranean Sea, the algorithm detected almost twice as many fin whales as a previous manual investigation. During our pilot study I in the Bay of Biscay, the algorithm detected fin whales and three other whale species. Besides, SPACEWHALE successfully counted humpback whales off the Hawaiian, blue whales and other species off the Mexican coast as well as Southern Right Whales off the Argentinian coasts and in New Zealand’s offshore waters. We provided baseline studies on a range of products including abundance and distribution estimates to our clients.