AR/VR technologies are powerful tools to develop new services to enrich tourists’ experience in visiting archaeological sites and monuments. However, currently available services suffer of some drawbacks: users, especially when approaching to AR/VR experiences, are constrained at static position and personalization is very limited, whereas “spectacularity” of the experience overwhelms the rigor of the scientific basis of the virtually reconstructed or recreated artefacts.

VADUS aims at overcoming these limits by the introduction of new solutions and digital contents for a fully immersive experience, without any constrains in terms of mobility and duration, offering high quality 3D model enriched by multimedia informative and scientific contents.

A new way of experiencing the visit of museums, artistic and historical sites will be offered by creating and proposing virtual tours to access areas with difficult accessibility (i.e. war, physical barriers, security) or understandability (i.e. cultural gaps, missing parts, interpretative hypotheses). These virtual visits will be tailored on the specific customer profile and preferences.
The objective is to reveal the hidden parts of the artworks thanks to the use of the state of arts knowledge and “in situ” measurement technologies used in restoration and monitoring of cultural heritage

Cultural tourism experienced a constant growing trend from 80s until the explosion of the COVID19 pandemia, which transformed a relative limited niche, considered as a ‘good’ form of tourism, in a mass market phenomenon, known as ‘overtourism’. Cities such Venice and Rome are overcrowded by tourists interested in few sites/monuments, while the full cultural heritage remains hidden jewels for handful tourists: while the Coliseum is visited by around 7 million tourists per year, the Archaeological Park of Ostia Antica reaches barely 400 thousand.

So apparently two divergent trends are emerging: the need to sustain the local economies by increasing their attractiveness, while reducing the impact of tourists on fragile cities.

This apparent divergence can be overcome implementing and proposing new service for tourists to promote alternative cultural and historical sites and to increase their personal experience, knowledge and understanding of the visited areas.
VADUS target customers are any private or public organization managing historical and artistic sites:

The project VADUS aims at developing a new set of services for the enrichment of tourists’ visit experience based on the convergence of AR/VR technologies with 5G and satellite services; this convergence, in conjunction with a cloud infrastructure for the centralized management of the VR/AR applications and  different information layers, overcomes the need of a local IT infrastructure for the service delivery.

The main key winning elements of VADUS are: 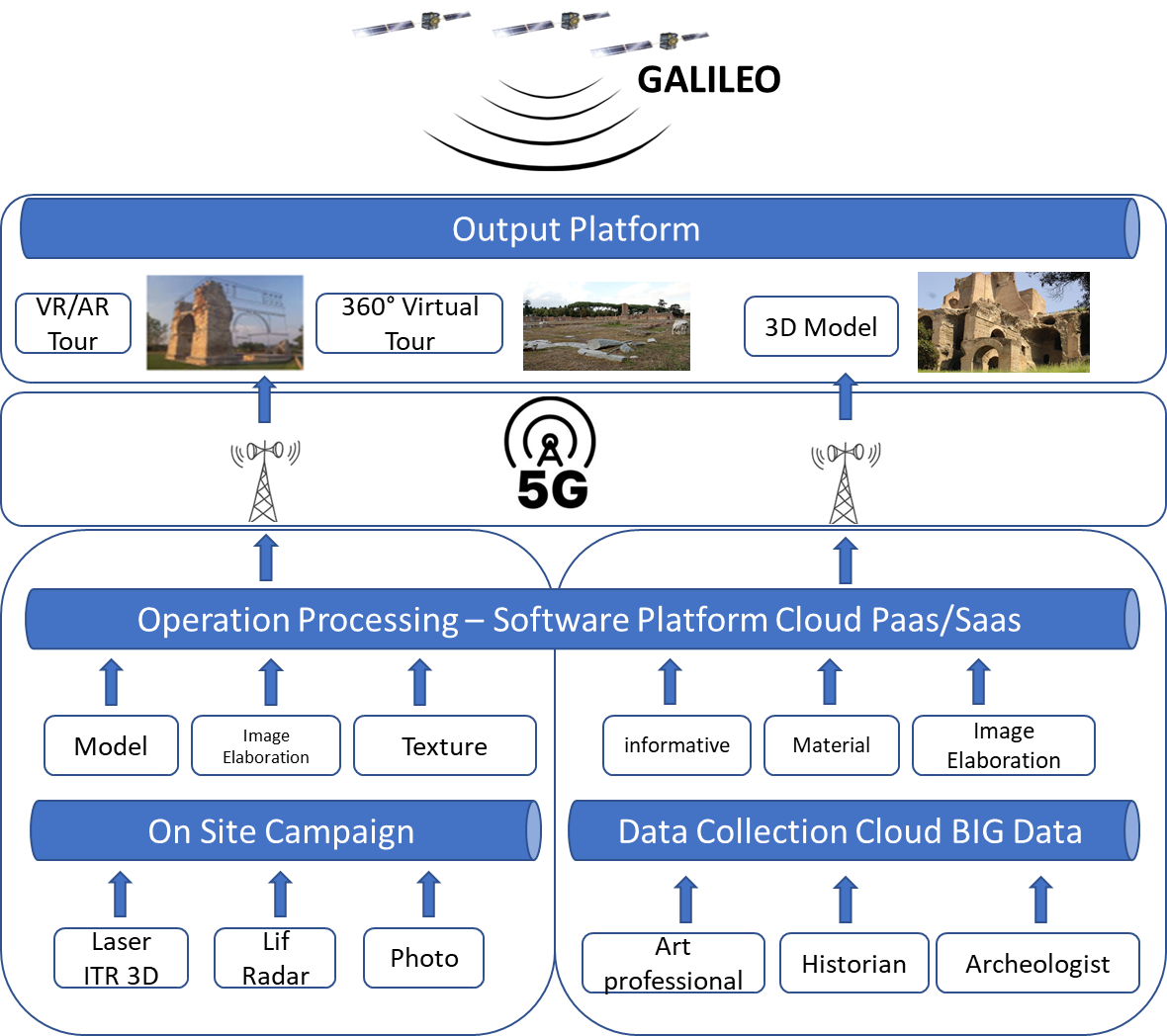 The consortium has delivered the official deliverables, Requirements Document and Business Plan, to ESA for the first milestone of the project.

The VADUS teams identifies the first demonstration site in the Archaeological site of “Ostia Antica”. The target is the Casa di Diana, that is one of the most important “caseggiato” (blocks of flats) in Ostia used both for residential functions of the middle class and for commercial activities. Originally it had perhaps five floors and takes this name from a terracotta tile depicting the goddess Diana the Huntress, inserted into the walls of the central courtyard. Built in the Hadrianic period (first half of the 2nd century AD) in brick curtain, it has a quadrangular plan with an internal courtyard, from which various corridors leading to the apartments and common areas. On the ground floor there were the shops overlooking the street only and with an upper mezzanine accessed by an internal staircase, as well as private apartments and common areas. The first floor was reserved for the most elegant apartments with an external balcony. The upper floors, on the other hand, were intended for the residence of the less wealthy social classes. It underwent important changes over time that affected both the internal walls and the floors. The geometric mosaics in black and white of some rooms, the polychrome mosaic of one of the sides of the portico and the marble tile floor of the triclinium belong to the original phase; in the second half of the 2nd century A.D. the courtyard was embellished with a valuable marble fountain, while the preserved paintings were made at the end of the century. During the third century A.D. the floors were raised and equipped with new mosaics, and in the late period of the century, some inner rooms was transformed into a “mithraeum” consisting of an aedicule, a marble altar (with reused materials) and a masonry podium (docks). 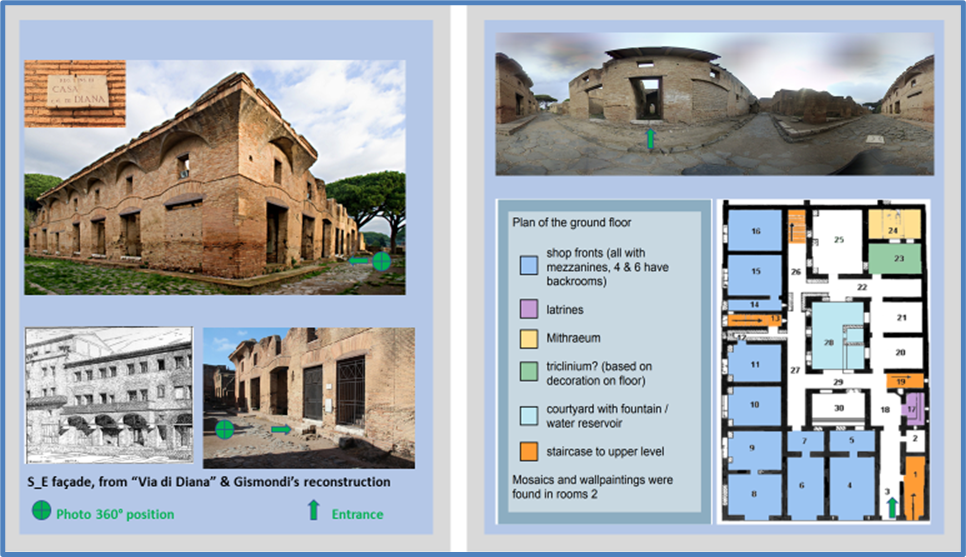 In June 2021 ENEA and CITERA held the measurement campaign in the “Casa di Diana”. The campaign lasted three weeks and were particularly focused on the room 30 and room 23/24.
ENEA utilized own-developed RGB-ITR and LIF lasers to create high-definition 3D models of frescos and to analyze the composition of frescos, walls, and artifacts.

CITERA performed on-site activities to acquire the physical dimensions for rooms/space of Casa di Diana and to take photos from a full-frame camera to create the required data base to develop 3D models.

The additional layers include reconstruction paintings, historical photos, 3d Models of artefacts from museums and/or other sites of PAOA.

The CDR was held the 19th/20th of October and was successfully closed.

The first version of the VADUS App is available and the first test sessions are conducted at the VADUS test facility in NEXT premises in Naples. 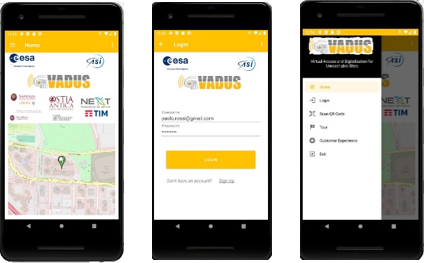 DIAG - Department of Computer, Control and Management Engineering of “Sapienza” University of Rome