Wildlife researchers and conservationists rely on camera traps and live animal traps to perform population studies and monitoring. Live animal traps are used to capture individual animals for study and GPS tagging. The size and effectiveness of studies is constrained by the cost and logistics of deploying, checking and retrieving these traps.

WAMCam is a smart camera unit, connected by satellite communications and backed by a system control panel to manage a collection of deployed devices. The rugged, battery-powered cameras are designed with AI onboard, capable of identifying difference species of interest. The initial project provides the tools to monitor live animal traps and notify the researchers when an animal is trapped and of which species.

With the advantage of an up-to-date list of the traps’ status, researchers are freed from the need to check all traps every day and can now prioritise which traps to visit. As such, they can either manage many more traps, or deploy traps to more suitable locations further away from base camp. Both scenarios revolutionise the way live animal trapping can be used.

Initial engagement is with conservation studies in the South East Asia region where researchers from the Oxford University Wildlife Conservation Research Unit (WildCRU) are studying the impact of deforestation on the native clouded leopard population.
Researchers face the challenge of studying reclusive animals in dense jungle. This requires the use of camera traps to study population density and then live animal traps to humanely collar individual animals for tracking. Physically setting up one animal trap in the desired location can take a whole day and the daily trek to check it can take hours. This limits the number and location of animal traps deployed.
The climate is hot, wet and humid and the forest canopy prevents use of solar panels, so basic trail cameras are used and visited every month or so to collect the data. Thousands of images are then manually reviewed to identify the species observed. Together this means the population studies take a long time to complete, before live trapping can even take place.
Users would benefit greatly from:
• hourly status reports of the animal trap status
• daily status reports of species seen by camera traps
• automatically cataloguing images from camera traps
South East Asia

The WAMCam system consists of several WAMCam smart devices, communicating over LoRaWAN with a SATCOM gateway device. WAMCam devices monitor live animal traps and send notifications to the end user when the trap is triggered. AI is used, so that the notification can include the detected species in the trap, or indeed indicate when the trap is empty and was accidentally triggered, e.g. by a falling branch.

LoRaWAN is used to allow the user to position the animal trap wherever required for the study purpose, unconstrained by satellite visibility constraints. The satellite gateway must be placed with adequate field of view, such as in a clearing, on a forest trail or on a ridge line.

Notifications are received by email and/or SMS over cellular networks, giving the users flexibility in how they interact with the system. The user configures the system via the web-based Cerebella control panel where devices are managed, and their latest status can be seen. Status reports include battery health, memory card space and the status of the animal trap (open, closed, animal contained etc.) 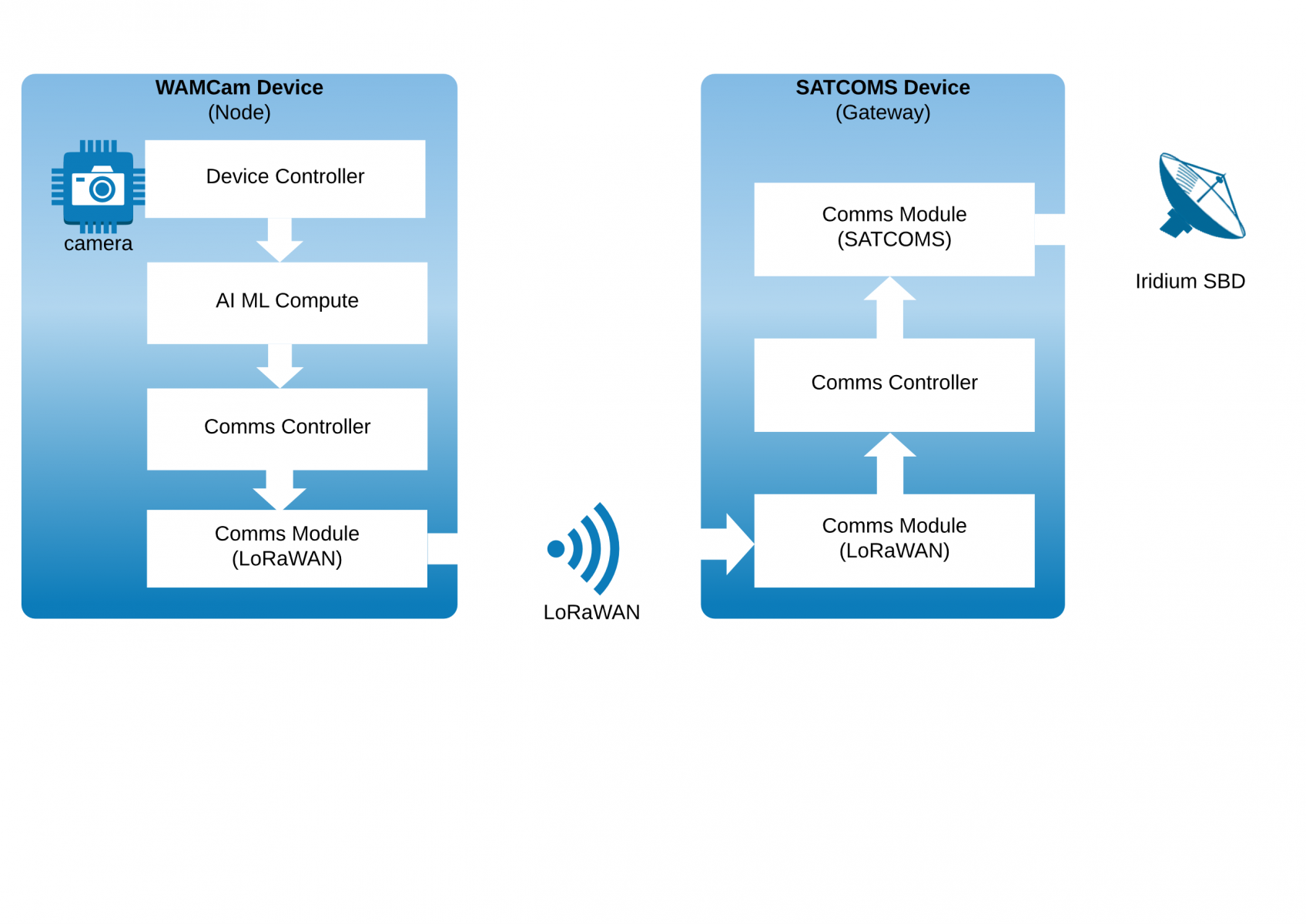 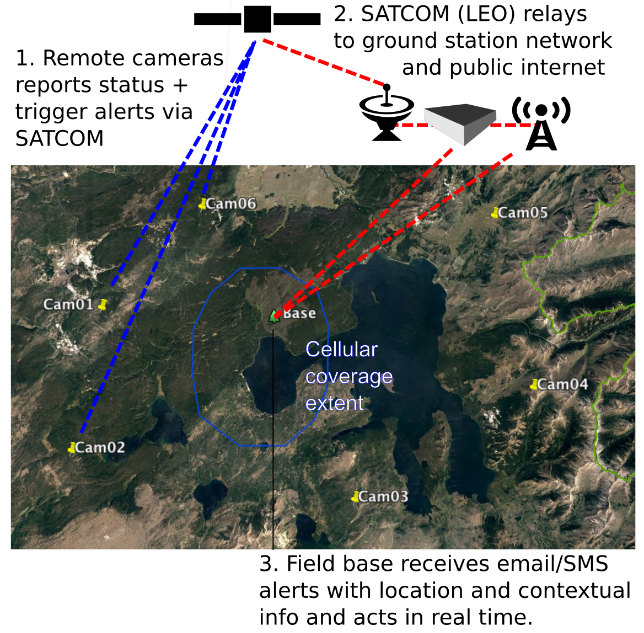 Using satellite communications to send notifications and receive commands, allows the researchers to place their traps wherever is most appropriate for them, regardless of terrain and cellular coverage.

To minimise cost, the WAMCam system uses Iridium SBD messaging to notify the user of the animal trap status and contents. Small, text-based messaging is perfect for sites with satellite visibility issues. SBD messages are received at the ground station and forwarded to the Cerebella middleware, where they are processed and passed to the end user as notifications.

Iridium SBD can also be used to send configuration commands and requests to the WAMCam device. For example, this would allow the user to reconfigure the frequency of status reports.

Future enhancements would allow the transmission of image data, using alternative satellite communication channels where terrain and power constraints allow. This would allow the visual confirmation of the animal contained in a trap and its general wellbeing could be assessed.

WAMCam started as a kickstart feasibility study. The study successfully completed with an end-to-end system prototype, facilitating user engagement and feedback on the system requirements. The devices have been tested in jungle conditions and reliably send AI-generated Iridium SBD status messages from beneath the forest canopy to remote end users who have cellular coverage.