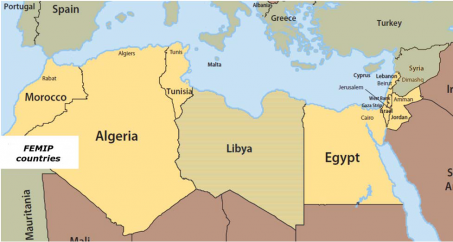 Could the development of space-based services in key sectors in the Southern and Eastern Mediterranean areas support economic growth? The answer is a resounding Yes! That was the conclusion reached in Space for Med, a joint undertaking between ESA and the European Investment Bank (EIB). Space-based services in this region, the participants determined, have tremendous potential in vital economic sectors such as water-management, transport and logistics, as well as energy and renewables.

The initiative was an offshoot of ESA’s Integrated Applications Promotion programme (IAP) and the EIB’s Facility for Euro-Mediterranean Investment and Partnership (FEMIP). FEMIP was established by the EIB to assist the economic and social development of the Mediterranean partner countries. One of the most important outcomes of Space for Med has been SMAP, the SpaceForMed Acceleration Programme, which will support European companies entering the markets of FEMIP countries. Leveraging the experience gained through SpaceForMed, a SMAP pilot is now up and running and targets start-up companies in Jordan.

SpaceForMed also identified a number of short-term opportunities with excellent potential. In Egypt, ESA will progress with a pilot project led by Mott MacDonald (UK) to demonstrate on a small scale the benefits of a country-wide full space-supported water management system, and potentially showing the benefits space technologies can bring to planning and management activities, with Egypt’s EGYPTSAT-2 as one possible data source.

Similarly, another ARTES-funded pilot project to be undertaken by Noveltis (F/CH) would use space assets to monitor ground water extraction catchment areas in Tunisia.

Both these activities demonstrate the capabilities of space technologies to support national water management issues, and could led to further investments by EIB in the medium term.

The interest showed by dozens of companies and institutions both in Europe and FEMIP demonstrates the great potential frameworks such as SpaceForMed have, particularly when jointly undertaken by two such highly credible institutions as EIB and ESA.

Having representatives from the European space industry travel to FEMIP countries to explore opportunities was important, but equally if not more so was bringing FEMIP players to Europe and introduced them to the European space industry. The participation of several investors and entrepreneurs from FEMIP countries investors at ESA’s Space Applications Workshop in 2014 was a great success and helped further refine the Space for Med framework.