It is therefore clear that any system or service that wishes to address this urgent problem needs to account for large-scale effects, yet provide information on a useful urban scale.

Our solution: AIR-Portal
Given the challenges presented above, S[&]T together with KNMI have developed an Air Quality Dashboard for European cities, called AIR-Portal. AIR-Portal uses a custom-designed, local Air Quality Model that
combines remote sensing, land use, road and local monitoring data into air quality forecasts on city level at a usable level of 100x100 meter resolution throughout target cities. The forecasts can be used in decision making processes for the cities involved and to inform the public about air quality on a local scale.

The combination of large-scale and local effects enables AIR-Portal to address urban air quality issues on a large scale.

AIR-Portal is aimed at three customer/user groups, which have the following needs:

The following end-users are connected to the project:

In the feasibility study of AIR-Portal it has been shown that air quality in urban environments can be modelled and visualized using a combined processing of geo-information, available sensors, satellite data, road information and forecasting models. The spatial resolution that can be achieved with this method was shown to be 100m.

Based on this, the system provides a reliable, 24/7 operational service for displaying current air quality (NO2, PM2.5, PM10, O3, and Air Quality Index), as well as build a historic database and provide 3 day forecasts.

The AIR-Portal system consists of:

The figure shows the main components of the AIR-Portal architecture. The system can roughly be divided into 4 layers: Data Ingestion (where CAMS and additional data are ingested), Processing (where ingested data are pre-processed and the scaling algorithms are applied), an orchestration layer, and the client access layer (which can either be the AIR-Portal progressive web app, or API data access). 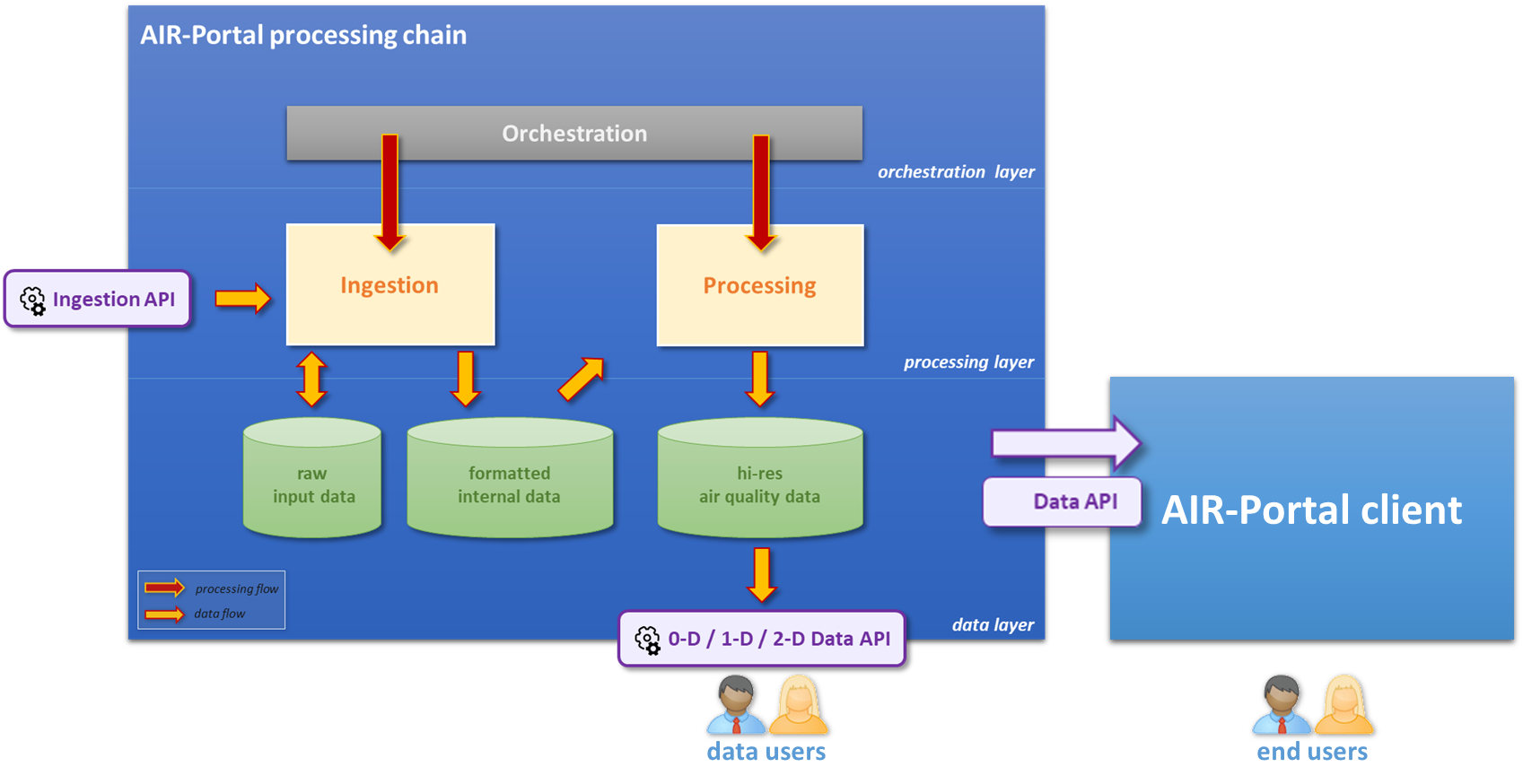 The main space asset used for the service is Earth Observation (EO). EO is the only sensor system that on a regular basis provides a true global coverage to measure the atmospheric conditions. EO data are incorporated in the system via the Copernicus Atmospheric Monitoring Service (CAMS), which provides forecasts based on a combination of Earth Observation data and modelling, and the Copernicus Land Monitoring Service, which provides land use data for Europe.  At the moment, the ESA satellites used in CAMS are the EUMETSAT satellites. Sentinel data is not yet in use, but the relevant Sentinel satellites for air quality will be the Sentinel 4, 5, and 5p.  Using EO as a primary data source makes AIR-Portal less dependent on ground based infrastructure with respect to other air quality services, which are generally based on ground based measurements. This allows the system to be deployed and effective also in areas that have little ground based infrastructure.

GNSS (Global Navigation Satellite System) plays also a role in the service, since the service is aimed at providing people Air Quality information at their location. Currently the person’s location is used to assess their time zone, and show the correct data. In the future this may be extended with more location based services.

The AIR-Portal Feasibility study was successfully completed in April of 2017 and the current project is the Demonstration Project that followed from it.

The Demonstration project started in October 2017, and had its Final Review in July 2019. There was some difficulty in engaging end users since often institutional (cities) customers have long decision and procurement processes. However, the new pilot end users were found, that are committed to the rest of the project.

During the last phase of the project, pilot end-users got hands on experience with the service. In addition, the AIR-Portal model was validated by the KNMI. Comparisons of the AIR-Portal approach with measured values provide a strong case for the added value of the approach for downscaling coarse scale models for the urban/local scale environment. The main added value of AIR-Portal is the downscaling step: AIR-Portal data has a resolution of 100m, compared to 5-10km for CAMS. This in particular impacts pollutants with a strong primary component such as NO2, which is reflected in most metrics, while ozone is often underestimated due to the “titration effect”. Moreover, the benefits of using AIR-Portal as a means of downscaling and refining coarser resolution models is confirmed by the performance  of the system near strong emission sources (e.g. in the vicinity of the city road network). Improvements at urban background or suburban stations, where the dynamic and atmospheric chemistry conditions are more complex is not seen equally well. Consequently, a substantial improvement is seen in most cases for the hit ratios, but often also a small deterioration of false alarm ratios for the above pollutants.

At the end of the project, AIR-Portal had 1 commercial client, with a second one in the process of procuring.