To keep their operations certificate, airport operators need to monitor and manage many different aspects to secure aviation safety. Among these potential safety threats are the airport surroundings, which airport management is obliged to survey and manage to secure safe flight takeoff and landing.

There are many different approaches to handle the surveying obligations of the airport surroundings. The commonality for all current approaches is that they are man-hour intensive, handled in standalone systems, and often demand specialized human resources.

Expenses arising from dealing with breaches of limitation surfaces and wildlife management are significant in this context. Particularly the regional and small airports struggle with these responsibilities due to a lack of resources. Large airports allocate greater resources to ensure compliance with these issues.

The AMMO service offers analysis of Earth Observation data for safety monitoring of the airport surroundings, and combine it with a cloud and browser based management system. Here, one can create and manage aeronautical information with metadata including audit trail and permission handling for documentation of compliance of all activities in the areas.

Ascend provides two distinct services that fits all types and sizes of airports, and excels by being cost-efficient. Last but not least, they do not require specialized human resources to be operated, which is a very important factor for wide acceptance throughout the global airport industry.

Ascend serves multiple users in the aviation industry, by providing transparent on-line knowledge about the airport surroundings between all stakeholders, including Airport Operators, on-the-ground workers, Civil Aviation Authorities, wildlife management and many others.

The key users in the Demonstration Project are Nordic airport operators, ranging from small to major size airports while more generally the targeted users are airport operators at a global scale.

The core user needs for a new system are common for small, medium and large airports. They include:

Due to the IFR airports varying in size and resources, Ascend experiences a differentiated demand. The AMMO IFR service covers the needs for all sizes of IFR airports:

Other issues such as obstacles that may generate turbulence, hazardous confusing and misleading light, reflective surfaces etc. can be handled by the airport operator using the GIS functionalities available in the AMMO service.

The AMMO VFR service helps the airport operators to fulfill their safety and compliance obligations through two subscription-based services: 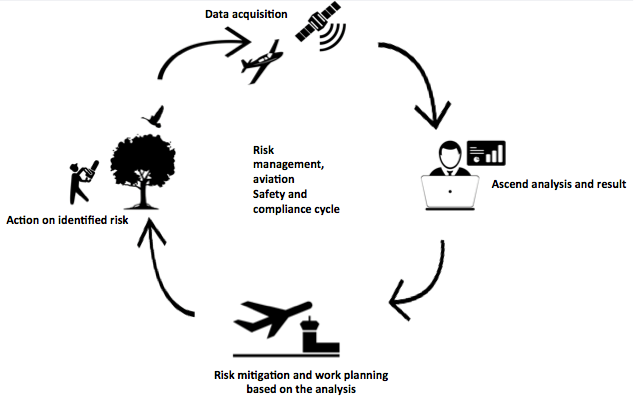 By combining the continuous stream of data from space assets, the AMMO service provides an innovative and low cost way of exploiting satellite imagery, and performing user-friendly analysis on the data.

On 22 May 2017, Ascend successfully completed the Final Review Milestone Meeting and thereby the AMMO project. The meeting was held at ESA/ESTEC, the Netherlands.

The project was run within the proposed timeframe (months), and successfully met the original objectives and beyond. 16 software modules have been sold to the first 9 paying customers (amounting 61 individual users) before the end of the project. No blocking technical issues along the way and high utilization level throughout the trial period. All demo users are highly satisfied and all expect one (in contract negotiations when this was written) are paying customers by the end of the project. Ascend has scaled the sales department from 3 to 8 employees within the project and are negotiating contracts with +15 new airports as the project is ending. The sales reached within the project goes beyond the Danish market and are distributed over the following countries: Denmark, England, Scotland and Spain. A numer of sales contracts are currently negotiated in following countries: Germany, North America, South America, Turkey, Sweden and Romania.

Within the project the users have experienced going from pen & paper methods to the Ascend’s AMMO service and reducing time spent on wildlife recording with approx. 90%, from 50 hours to 4 hours a month. The 13 km monitoring module reduces the airport wildlife consultancy cost with 80%, going from 4 weeks to approximately 1 week a year. All airports expect to make savings in the near future by using the AMMO service.