The original B-LiFE Demonstration Project has been successfully concluded and B-LiFE is now a sustainable operational service integrated and certified in the European Union Civil Protection Mechanism. Based on the excellent results delivered so far, users have requested to further exploit the promising potentials of the B-LiFE service by extending its capabilities through new telecommunication and crisis management features. This new project phase will therefore enable to develop a new Field Communication and Control System, allowing for increased communication capabilities and new tools for crisis and logistics management. This new service element will be integrated into the current B-LiFE service portfolio.

Following the request from users for new capabilities to answer their critical needs in terms of emergency response, this new B-LiFE project phase will develop a multi-mission, multi-user Field Communication and Control System, which is integrating satellite telecommunication with terrestrial communications (TETRA, LTE and later 5G).

Based on the experience from the recent terrorist attacks (Zaventem airport, 2016), the Belgian Ministry of Interior (Direction of Civil Security) has developed a partnership with B-LiFE for the development of new telecommunication backup capabilities. The Ministry has selected B-LiFE as a major building block of the envisioned considered service for several reasons:

These capabilities are now needed on an urgent basis for National Security purposes in many European countries.

Institutional and commercial users in Belgium and in all European countries as well as international non-European markets.

The key new features of the extended B-LiFE service include: 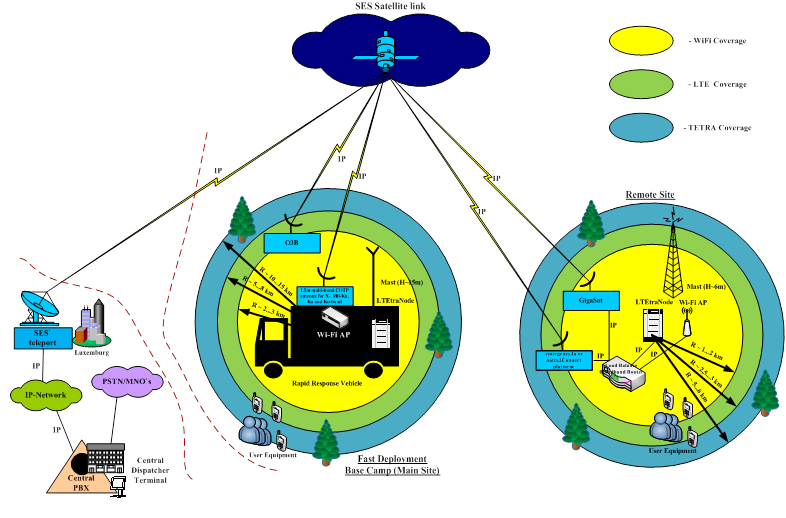 Generic Architecture of a Fast Deployment Telecommunication Node for Emergencies for a Biological Light Fieldable laboratory.

The use of three categories of space assets (Satellite communication, Satellite navigation and Earth Observation data) combined with the terrestrial communication networks will provide a high-performance capability in terms of emergency response anywhere in the world. 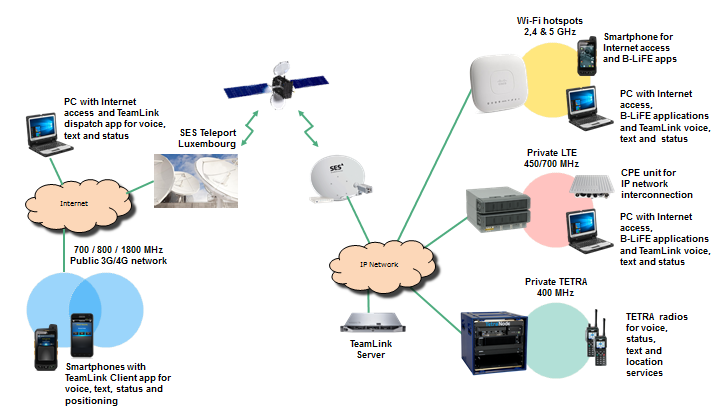 B-LiFE TEN Proof of Concept deployed during the BioGarden exercise 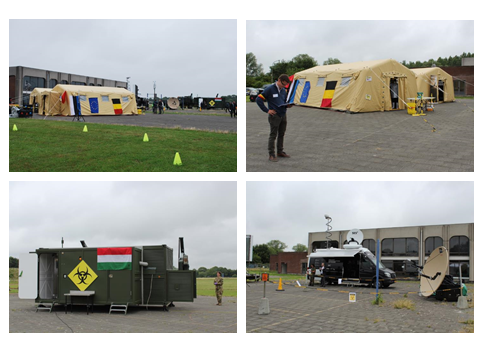 Views of the Bio-Garden Exercise: B-LiFE tents (above wirh Bio-Laboratory in front and C² at the back), Hungarian Defence Mobile Bio-Laboratory (below left) and SES Networks Rapid Response Vehicle - RRV (below right)

A proof of concept in the frame of the “Bio Garden” exercise was demonstrated on 19 June 2018 to run some operational tests of the global system in a real environment with stakeholders. The aim was to collect and consolidate the user requirements for the new features. The feedback from this proof of concept is the basis for the future development, integration, testing and verification work.

The final trial of the B-LiFE CCN#2 has been successfully performed  in November 2019 at the Belgian Civil Protection facilities in Brasschaat (Belgium) in the frame of a simulated crisis. The B-LiFE Telecommunication Emergency Node has proven its operational capabilities and has allowed B-LiFE to become an even more versatile crisis management tool. The Final Review of the activity took place on 02 March 2020. 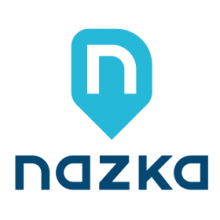