DeSIRE II, Second Element of the ESA EDA RPAS Demonstration Roadmap aims at developing and demonstrating services based on a Remotely Piloted Aircraft (RPA) flying in Beyond Radio Line of Sight (BRLOS).

The project aims at:

From a regulatory perspective, the project has more specifically the objective to contribute to demonstrate that the Satcom link, allowing safe BRLOS Operations, is a key enabler for RPAS insertion into civil traffic.

In particular the aim is to provide the first set of Required Link Performance (RLP) parameters for the RPAS C2 link (including ATC relay) following the guidelines provided by JARUS, in BRLOS conditions via a dual satcom link.

Further to this, the project aims at gathering the user requirements on a service market perspective, also considering the actual operational gaps within users’ operational environment in the Border Control, Law Enforcement, Fisheries Control and Fire events framework. 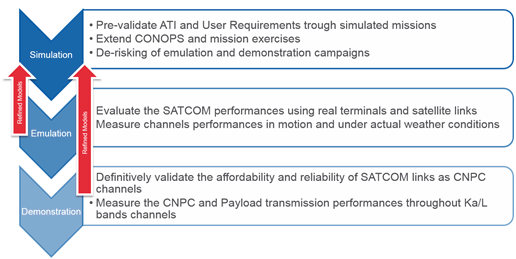 DeSIRE II is supported by a wide range of RPAS potential users and regulatory stakeholders from different countries (Italy, Switzerland):

Users participated in the consolidation of the users, mission and regulatory requirements and in the review of the project results, lessons learnt and recommendations. Dissemination actions were performed to support the regulatory progress on Air traffic insertion.

Users were involved in the demonstration of services capabilities enabled by RPAS in the following operational scenarios:

Services considered during the project include:

The VAS Processing Centre integrates the above data making available in near real time the VAS to the End Users, through FTP/Webgis dedicated secured access interfaces.

The objective of DeSIRE II project is to demonstrate the effectiveness of a satellite communication system for RPAS able to fulfil the requirements for traffic insertion and ATC communication in BRLOS operations. During the flights, the RPA follows IFR rules and is controlled by the ATC. 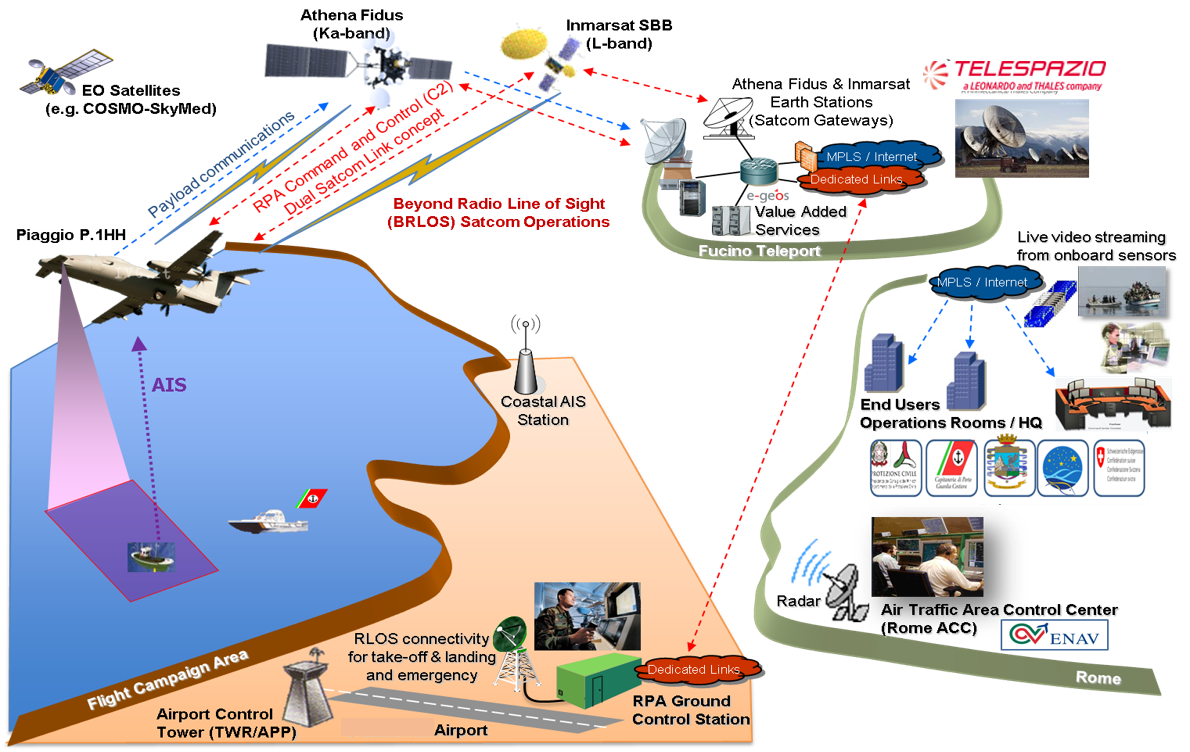 System Architecture is structured into the following building blocks:

In the considered architecture:

In addition to the currently integrated RLOS datalink connectivity, the P.1HH RPAS is  equipped with the elements necessary to perform DeSIRE 2 mission tasks:

The Space Segment of DeSIRE II is composed by :

The Ground Segment is composed of five main elements that are needed to control the operation of the mission, the integration of the RPA in the airspace and the mission data exploitation:

Communication satellites are key to provide Beyond Radio Line Of Sight (BRLOS) connectivity, to allow:

EO satellites data are integrated with RPA Payload Data and other ancillary data to provide value added products to the users.

In addition, by processing EGNOS augmentation data, a very high accuracy and integrity is offered, potentially enabling precise flying in all phases of the flight and improving services offered to the user community.

The project was kicked-off on 9th April 2015 and was completed in November 2018.

The main outcomes of the DeSIRE II project were related to the characterization of SatCom channels, i.e. Ka and L band separately and combined (dual link) in terms of latency, continuity, integrity, and availability. They were achieved during the emulation campaign where more than 100 hours of CNCP traffic tests were collected and analysed. The applied methodology for RLP parameters assessment and the results obtained, in particular from the Emulation phase, should be considered an important input for Standardisation and Regulation purposes and could be the basis of future Acceptable Means of Compliance for the upcoming Regulation.

There are nevertheless several validation activities still to be done in the Emulation and in the Flight test phases, in order to gather a wider set of data that can be considered statistically relevant for RLP assessment. Real-time Simulations using the datalink performances and with more complex traffic environment and emergencies would also be relevant.

The Demonstration Flight Campaign carried out at Birgi airport in Trapani, Italy, by Telespazio and Piaggio Aerospace in March 2018 (outside the Contractual Frame) confirmed the positive feedback on the usage of the satellite technology for BRLOS operations, as outlined by the P1HH pilots remotely controlling the RPA via satellite during the en-route phase, including several flight manoeuvres, and for various dual-use applications under realistic conditions. The success of the trials represents a step towards a future where remotely-piloted aircraft can be used to support public services, such as environmental monitoring, surveillance, and emergency management