Methane Watch makes an invisible problem visible. Methane emissions account for approximately 25% of global warming, but efforts to reduce emissions have been limited until now because it is technically challenging to detect and measure methane leaks that are widely dispersed along the energy supply chain.

The main objective of Methane Watch is to support the decarbonisation of the energy industry. Methane is, by far, the biggest source of carbon pollution in the oil & gas industry, but producers need better data to eliminate the sources of emissions in a cost-effective manner. Satellite monitoring is uniquely placed to support mitigation across entire supply chains and countries.

Methane Watch also aims to create awareness about the scale of emissions and the opportunities to mitigate on a large scale. An independent data source allows regulators to design and implement more ambitious climate policies, while investors can allocate capital based on a more accurate and timely assessment of environmental performance.

The ultimate objective of Methane Watch is to contribute to the Paris Agreement’s objective to keep global warming to 1.5oC. Eliminating the super-emitters that can be detected from space is equivalent to removing 20 million cars from the road.

The main types of users targeted by the Methane Watch are oil & gas producers, financial institutions, and regulators.

Thanks to recent breakthroughs in satellite monitoring, methane emissions in the energy sector are under greater scrutiny than before. In order to meet this challenge and maintain their license to operate, producers need to report their carbon footprint accurately. They also need to identify the methane sources in their asset portfolio and reduce/eliminate them in a cost-effective manner.

Investors have relied until now on self-reported data from energy companies, which typically understates their total emissions. Asset managers need better data to measure the carbon footprint of their investment portfolios, manage the reputational risk of holding assets with higher-than-average emissions, and engage as responsible shareholders to drive mitigation across the energy sector.

The TROPOMI instrument on board Sentinel-5P provides invaluable information on methane concentrations in the atmosphere around the world. The value of Methane Watch consists in identifying and quantifying large methane sources that are often associated with the production of fossil fuels. 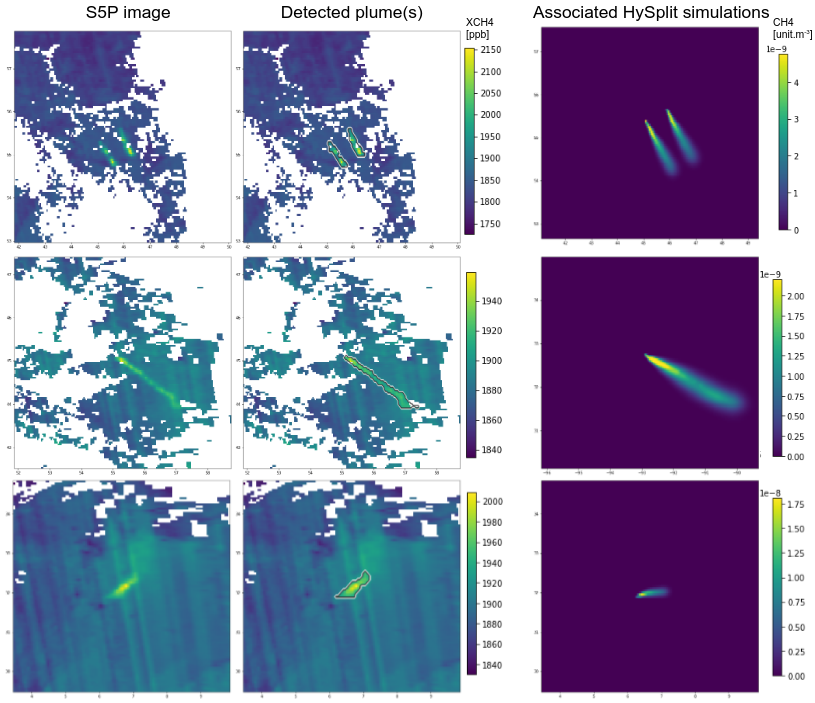 The first step in the processing pipeline for super-emitters consists in applying machine learning techniques to detect anomalous concentrations of methane measured by Sentinel-5P. This automated process involves denoising, estimation of the local background level, and segmentation of the methane plume. The second step relies on the use of a dispersion model to simulate methane plumes under local wind conditions and determine the location and flow rate of the methane source.

A similar process is used to detect methane plumes using high-resolution imagery, for instance from Sentinel-2 and Landsat-8. The key differences are 1) the manipulation of multispectral bands associated with methane and 2) the targeted nature of monitoring specific locations rather than the entire globe.

A separate process is used to measure emissions at the regional level. The first step consists in calculating the average concentration of methane in an oil & gas basin, measured as a gradient relative to the background level. The second step relies on a full inversion model that simulates multiple sources emitting at different rates across the basin. The prior definition of these potential sources reflects the distribution of energy infrastructure and is a crucial component of the model.

Methane is technically challenging to measure because, unlike CO2, its sources are widely spread across the energy supply chain and over time. A monitoring system must cover entire oil & gas basins and pipeline networks regardless of asset ownership and national boundaries. The frequency of observations is also essential to the accuracy of reporting.

Relative to alternative solutions based on aerial and ground level monitoring, space solutions provide much greater geographical coverage and sampling frequency. The Sentinel-5P Earth Observation satellite covers approximately 10 million square kilometres on a typical day, whereas an airplane can cover only a few hundred km2 and a ground sensor is limited to a specific facility. Moreover, aerial campaigns are expensive and require authorisations from local authorities.

On that basis, satellites are an essential component of an integrated system that combines the coverage and frequency of satellites and the sensitivity and resolution of local sensors.

Following the Critical Design Review meeting held in March 2022, Kayrros signed up another pilot client and received a firm expression of interest, both in the Public Sector segment. Meanwhile, the US government enacted new environmental regulations that create financial liabilities on methane emissions in the oil & gas sector exceeding US$1 billion per year. These developments support the core assumptions underlying the Business Plan. Meanwhile, the development of the Methane Watch capabilities continued with the addition of Sentinel-2 detection and quantification in the user interface, and with the participation in a blind test based on controlled releases of methane in the Arizona desert. This test, conducted by a leading US university, validated the detection and quantification capabilities using Sentinel-2, PRISMA and Landsat-8 imagery. The Factory Acceptance Tests review meeting took place in Paris on 27 September 2022 and was successful. The next meeting is the on-Site Acceptance Tests review, which is expected to take place in June 2023.