For airborne situational awareness support, SASISA combines existing technologies in a flexible, modular system that is designed to make the benefits of digitally networked, integrated technology available to civil emergency and disaster response communities in the EU.

Capabilities are demonstrated in realistic demo utilisation deployments in several countries to strengthen awareness, acceptance and support of the new service in emergency and disaster management communities, based on the integrated use of applied space technologies.

The demonstration system uses a Diamond DA42M multi-purpose small aircraft with pilot and operator, carrying a multisensor payload for still and moving images. Images are orthorectified on board and downlinked for visualisation in near real time during the mission over a Viasat Ku-band airborne satellite terminal for in-flight beyond line-of-sight Internet connectivity.

This enables the Mapping Production Centre at e-GEOS to generate integrated value-added post-processing products from aerial and satellite data, to and deliver them to users significantly faster than current rush-mode services. 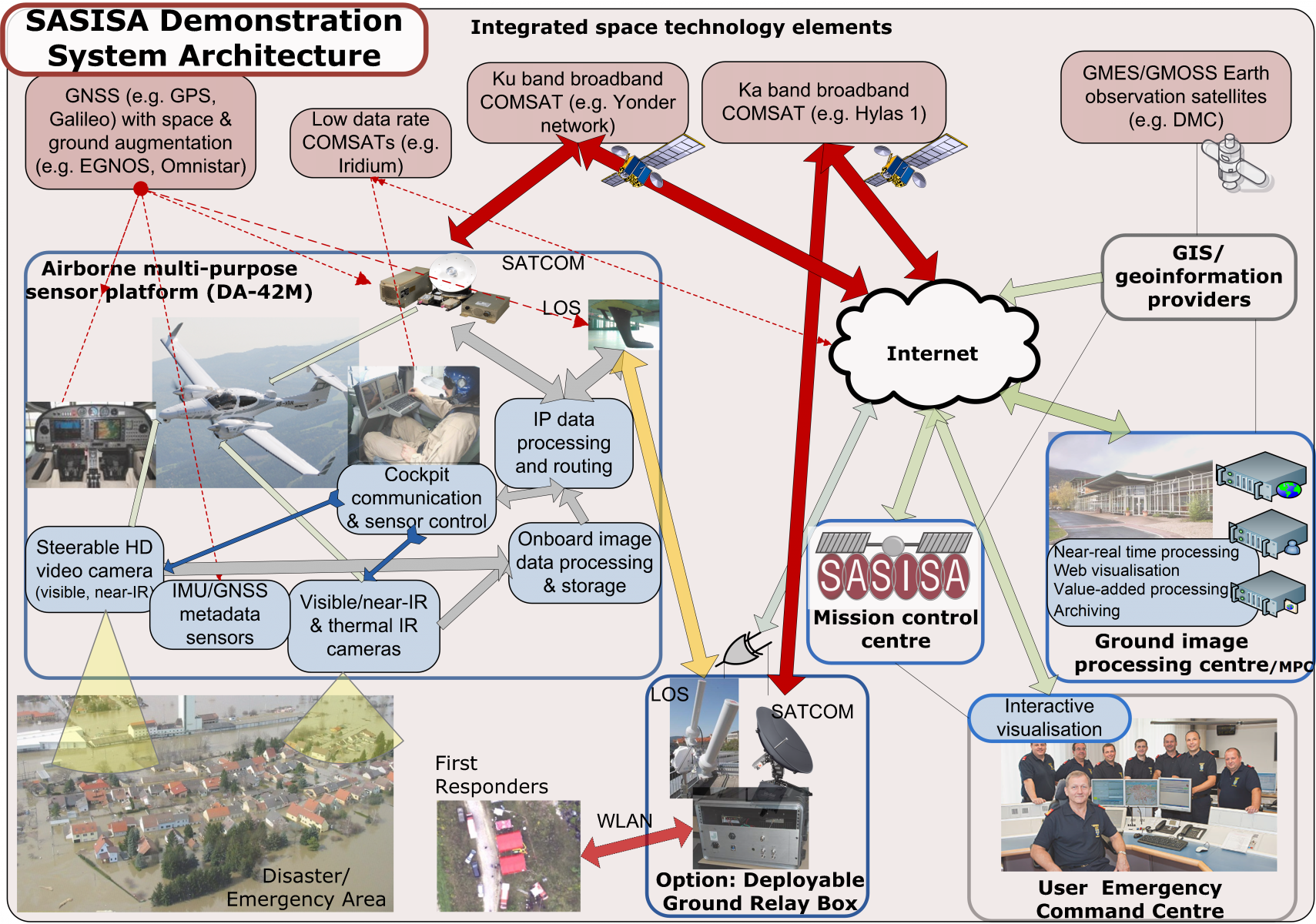 The SASISA service is designed for institutional users in the civil security sector with responsibility for disaster and emergency response and humanitarian assistance. The focus is on the European Union, but the geographical scope is not limited.

The participating and contributing users in the SASISA Demonstrations are:

To respond to disasters, users need

The modular system architecture with various sensor payloads and satellite communication beyond line of sight permits fast, effective emergency response and also facilitates other commercial utilisations of the same aircraft between activations in disaster events. 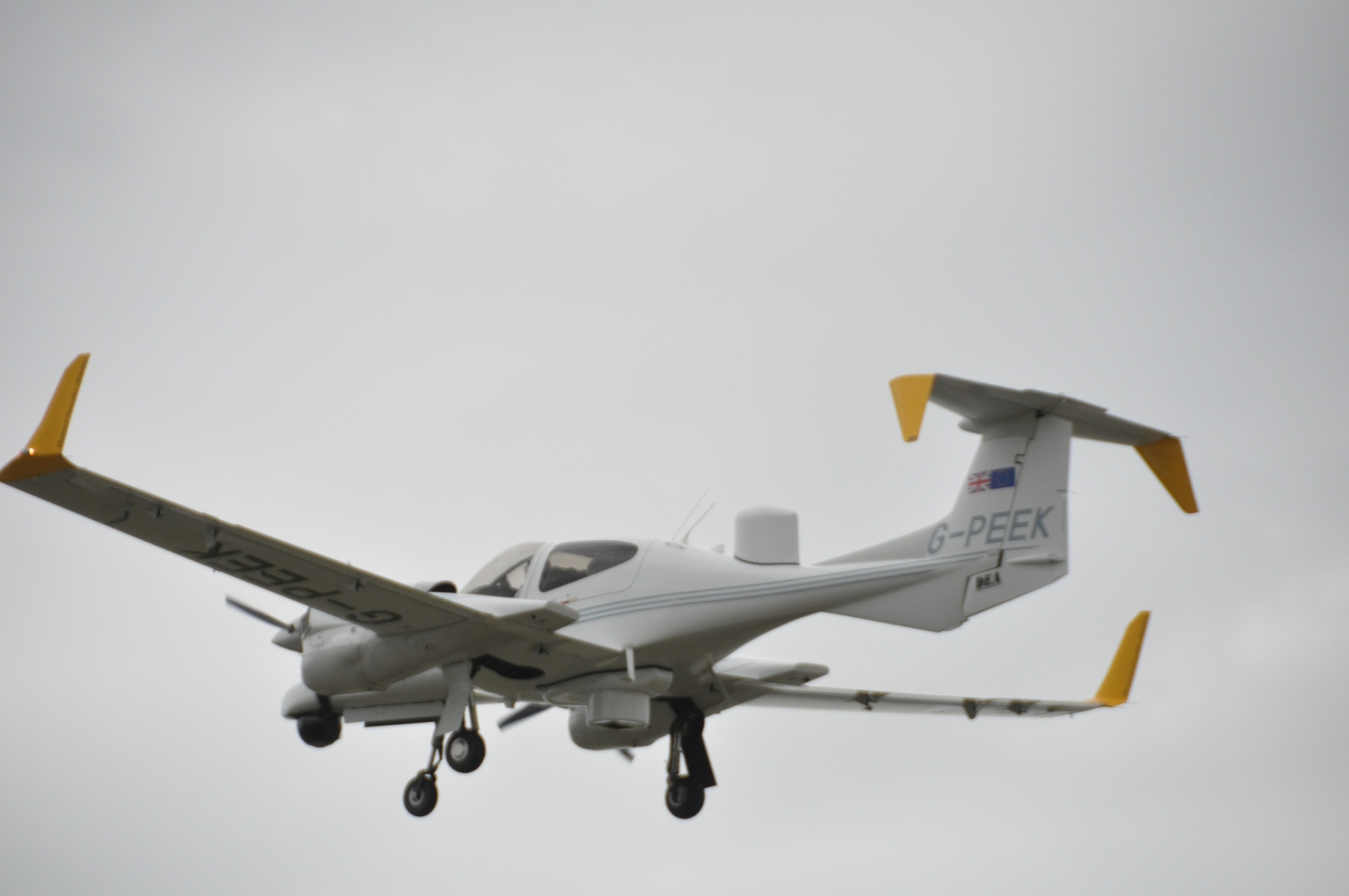 The airborne SASISA service uses two space technologies (Telecommunication and Navigation) and in addition, its operation and resulting data are closely combined with space-based Earth Observation to produce an integrated service and suite of products for users.

High-resolution Earth observation from satellites (radar and optical) is already established as a key enabler for European emergency management, and can be further strengthened by integrating it with an in situ instant-reaction airborne element that also improves performance under cloud cover and adds rapid oblique-view capability.

Airworthiness of the DA42M aircraft "G-PEEK" with the specialised SASISA mission payload configuration was certified by EASA in March 2015. This is the regulatory precondition for using it commercially.

Trials in support of integrating and testing the image capturing, processing, transmission and visualisation workflows were performed successfully in 2014/15.

The first SASISA demonstration deployment campaign was combined with a large, multi-scenario exercise on 15/16 May 2015, led by the Austrian Red Cross and the Lower Austrian civil protection agency, at Allentsteig training ground in Austria.

The second demo campaign was performed with the Italian National Civil Protection Department on 20/21 July 2015, operating the aircraft from Rome and covering wildfire scenarios in Campania and Calabria. More than 20 active wildfires in Southern Italy were spotted, captured and reported during the mission.

Key achievements of the project include:

The project was concluded with the Final Review meeting on 17 December 2015.