Potential users of Space Based Services for Railway Signalling are Infrastructure Managers and Railway Undertakings in Europe and worldwide. The study has identified the Community of European Railway and Infrastructure Companies (CER) and the ERTMS Users Group as reference users.

The typically high investment required for the implementation of the ERTMS standard constitutes an obstacle for the deployment of such a high safety standard in Regional Lines and Local Lines.

The drivers of main cost are:

The SBS-RailS Study investigated how and Satellite technologies (Satcom, SatNav) can be used within the ERTMS and its foreseen evolution.

In this context, the study has taken as input the Virtual Balise concept as conceived by the Next Generation Train Control (NGTC) project and the Future Railway Mobile Communications System as defined by the UIC (International Railway Union).

The concept of virtual balise detection using GNSS has been defined in order to minimize impacts on the existing ETCS.

The study additionally investigated Satcom solutions suitable for the introduction of future carrier independent telecommunication solutions as a replacement for GSM-R.

The introduction of satellite technology shall minimize the modification to the existing standard ERTMS/ETCS, shall guarantee interoperability with the existing specification and shall reduce the complexity of the commissioning and of the operational scenarios.

In the figure below, a general architecture of SBS-RailS ERTMS with GNSS architecture is illustrated. Blue boxes represent the existing ERTMS system, Orange boxes are the new elements introduced: The key elements are: 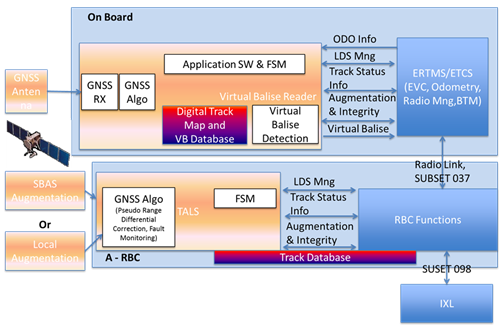 All the solutions taken into account will be used in a multi-bearer environment taking into account the guidelines given by EUAR for the evolution of the railways radio communication system for operation and signalling.

In the figure below, a general architecture of SBS-RailS ERTMS with Satcom is illustrated. 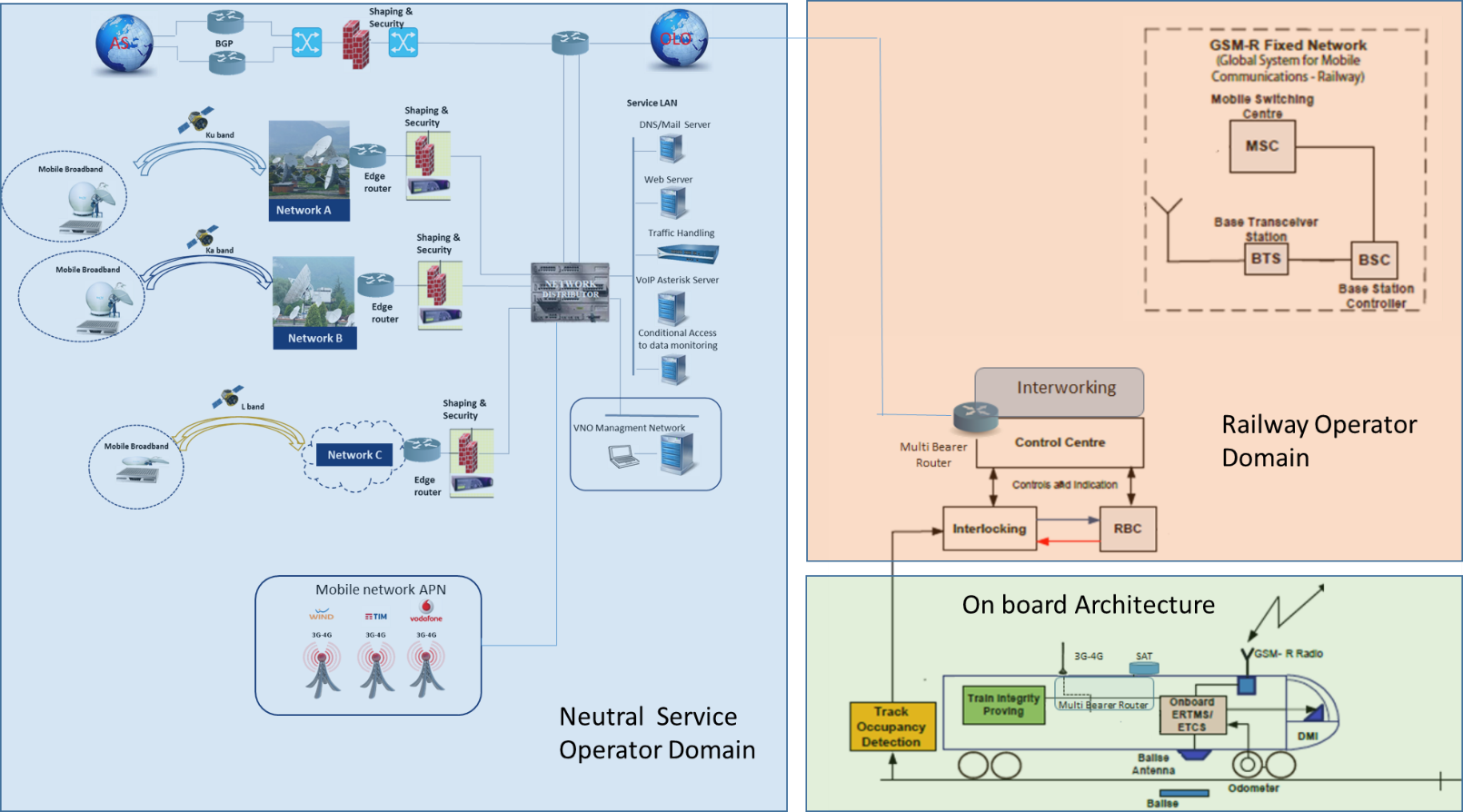 An important part of the SBS-RailS study has been the Proof-of-Concept, whose main objective aimed to further investigate critical issues through simulations and analysis before launching dedicated test campaigns, adopting the enhanced ERTMS solution based the Virtual Balise Reader.

In particular, the following elements have been studied:

The CBA investigated the economic convenience of the project solution from a public point of view in the long term.

The general methodological framework of the Cost-Benefit Analysis aimed to compare costs and benefits of alternative scenarios year by year with a discounted sum approach.

The baseline scenario implies the traditional ERTMS (with physical balises and GSM-R), while the project scenarios are multiple, all including virtual balises, but differentiated in terms of augmentation and TLC solution.

The alternative four solutions (project 1 …project 4) have been applied to the set of case studies (Local line and Regional line), represented by reference railway lines defined in the first part of the project and characterized by different trackside parameters and operating conditions. For each case study the best scenario is the Project scenario 3, that is the one envisaging the use of virtual balises for the localization of the train, EGNOS for GNSS augmentation and a multi-bearer solution for the telecommunication. The analysis highlighted that the EGNOS augmentation solution is more cost effective with respect to the railway dedicated solution and that the multi-bearer solution is more cost effective with respect to the GSM-R solution.

The additional “impact analyses” that have been carried out aimed to investigate the economic convenience from the point of view of specific stakeholders: Railways Infrastructure Managers and Railway Undertakings.

With some differences among scenarios and case studies, such analyses have shown that more relevant benefits (and a definite convenience) are accrued by IMs, whereas the RUs have a thinner business case. The best strategy would therefore be to set up benefit-sharing mechanisms (e.g. via the access charges) between the two types of operators, since the overall system has a long term convenience to implement the satellite based project solution.

The SBS Study targeted the scenario of local and regional lines in Europe. Approximately 50% of these railways are currently operated with different legacy solutions and lack in many cases the high safety standard achievable with the ERTMS.

The aim is to reduce cost (CAPEX and OPEX) of ETCS trackside by reducing the number of real balises installed along the track (reducing also exposure to theft and vandalism), and to find alternatives to terrestrial solutions for communications when terrestrial antenna deployment is not economically viable.

The project has reached its completion and the project results and recommendations have been presented, on April 6th 2017 in ESTEC, to  ERTMS Users Group, European Union Agency for Railways, Community of European Railway and Infrastructure Companies (CER), national Infrastructure Managers representatives (Italian RFI and Swedish Trafikverket).