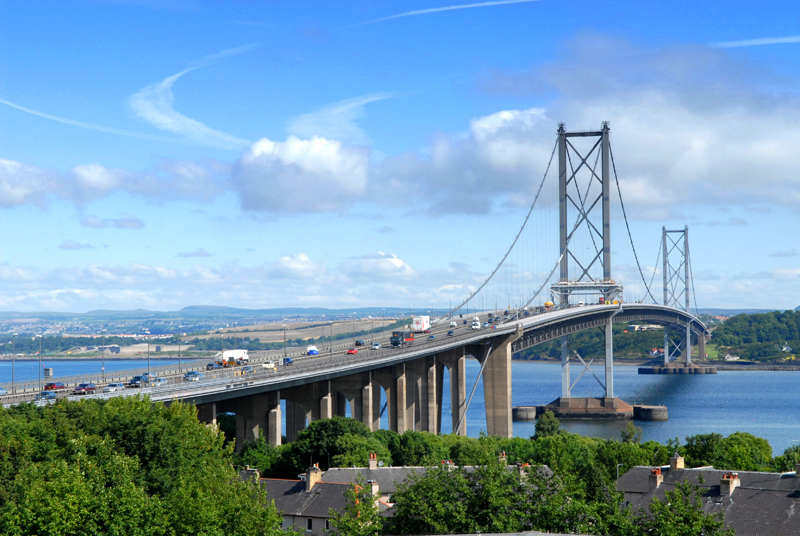 Bridges are part of the fabric of everyday life. They serve as important transport nodes and play a vital role in the socio-economic development of modern societies. Many have even become iconic structures in the regions that they serve.

In the course of normal use, a modern bridge is subject to a variety of stresses.  Bridges are also susceptible to changes in the environment, such as land subsidence due to landslip, engineering works, mining or other industrial activities. While uncommon, structural failures due to aging do occur, and the consequences of such failures are usually catastrophic. As such, a bridge operator must closely monitor a bridge’s structural health as well as its state at any given moment. When weather conditions call for it, traffic must be restricted, either partly or entirely.

Monitoring a bridge’s health is customarily performed by the bridgemaster, who is responsible for routine maintenance as well as issuing safety warnings. To help bridgemasters get a clearer picture of these environmental impacts, a consortium led by the University of Nottingham joined forces with the operator of the famous Forth Road Bridge in Scotland to develop a system, called GNSS and Earth Observation for Structural Health Monitoring (GeoSHM), which uses space assets for monitoring purposes. The activity was supported by ESA under the ARTES Programme.

The Forth Road suspension bridge was opened in 1964. Over the past fifty years, traffic has increased from the originally planned 30,000 vehicles per day to a daily average of 40,000 vehicles, with 60,000 vehicles crossing the bridge on peak weekdays.

As a result of this increased load, the bridge is experiencing stressed structural members and unexpected deformations.  Also, extreme weather conditions, such as high winds, cause frequent bridge closures, and  having only one lane open in each direction results in upwards of £650,000 in lost revenues per day.

The GeoSHM consortium set out to determine whether it was technical feasible and economically viable to deploy GNSS and Earth Observation technologies to monitor more precisely the Forth Road Bridge. Specifically, they wanted to provide the Bridgemaster with real-time indicators of bridge movement by means of highly sensitive sensors at key locations, as well as map potential long-term subsidence of the supporting structures.

The sensor system consists of one reference GNSS receiver set on the top of the Bridgemaster’s office, two GNSS receivers on each side of the middle span and one set on south tower. And also two high quality ultrasonic anemometers (wind meters) are installed on the bridge. 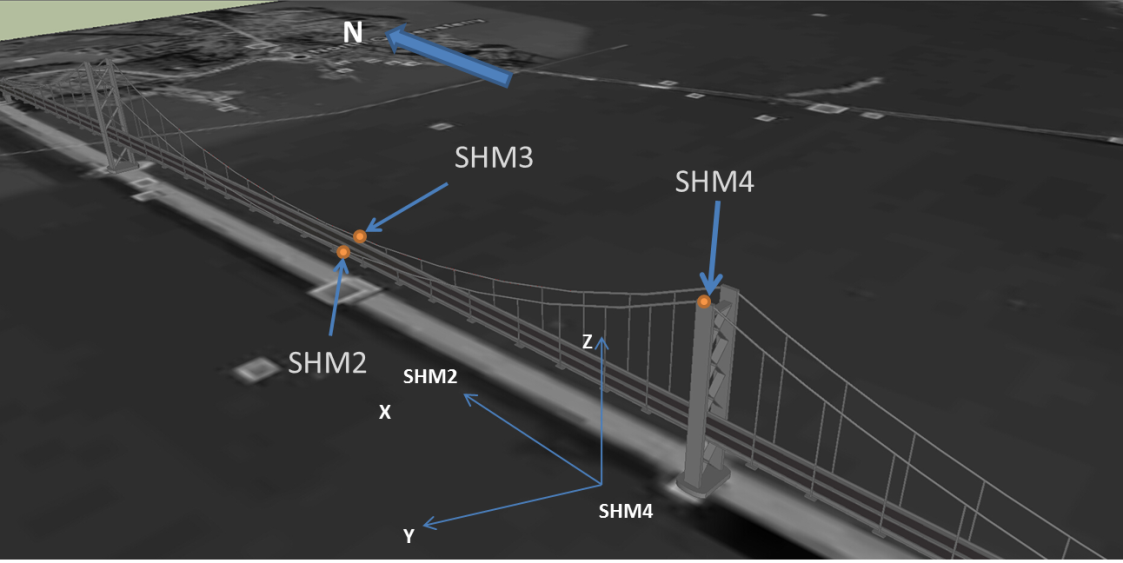 Automated data acquisition is carried out by these sensors and the real-time data is sent to a data processing centre at the University of Nottingham. The bridge displacement information together with wind loading data can be viewed by the Forth bridgemaster by means of a web-based interface. 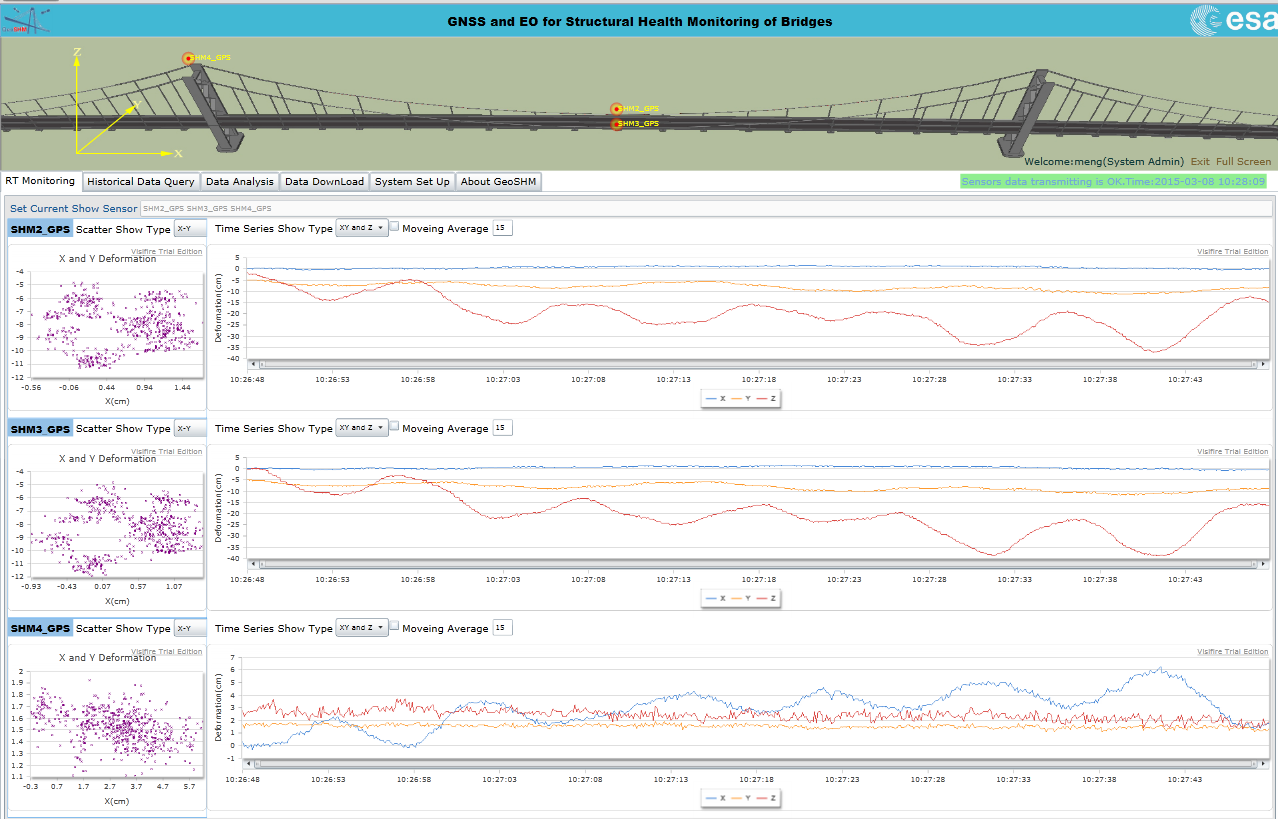 “Based on our experiences with the Forth Road Bridge, we’ve discovered that EO is a powerful tool to monitor both local changes to the surrounding ground as well displacements of key components of such structures,” said GeoSHM team leader Xiaolin Meng from the University of Nottingham. Analysing historical EO data, the consortium detected no apparent displacements of the towers or the surrounding soil during the previous seven years. 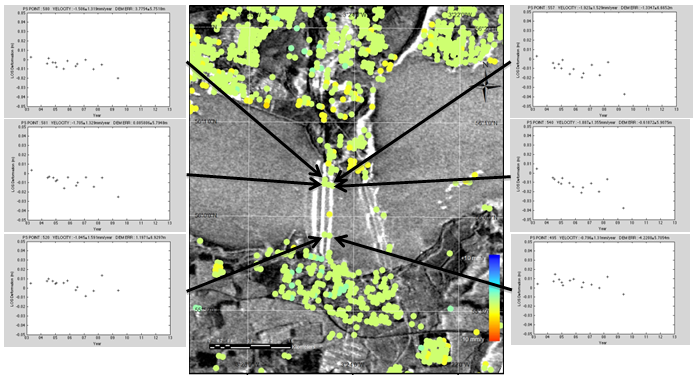 Not all bridges are as stable as the Forth however; EO imagery from China that the consortium has processed reveals ground subsidence around bridge sites located in two cities, Shanghai and Wuhan, that has been caused by underground engineering and groundwater extraction.

For this kind of analysis, the availability of EO imagery is essential. According to Xiaolin Meng, developing a viable business model for the European market will be greatly facilitated by having free access to the European Union’s public Copernicus EO data.

Having used the GeoSHM system for six months, Forth Road Bridge Bridgemaster Barry Colford observed: “This information is extremely useful for understanding how much the bridge can move under extreme weather conditions. This allows us to decide to close the bridge based on precise deformation information.”

"For example, I knew that the bridge can move significantly under high wind loading but for the first time I know that bridge moved 3.5 metres laterally and 1.83 metres vertically under wind speed of 41m/s (91 miles per hour)," he said. "Other information provided by the GeoSHM system is also important to define reliable alarm thresholds for issuing the right alerts at  the right time."

The solution installed on the Forth Road Bridge is a small-scale proof of concept to demonstrate the technical feasibility of the solution. The consortium is planning a follow-up project, in which Forth Road Bridge as well as several iconic bridges in China may be used to further develop the technology. The University of Nottingham, China Rail, and China Railway Major Bridge Reconnaissance & Design Institute (BRDI) are also examining the possibility of setting up a commercial company in the UK to promote GeoSHM in China, where nearly half of the world’s long span bridges (bridges with a main span greater than 400m) are situated.

While the GeoSHM solution has been initially designed mainly for monitoring long span bridges, the service also has potential, however, for shorter span bridge, such as Hammersmith Bridge and the Millennium Bridge in the UK.  "Eventually GeoSHM could be deployed for monitoring other type of infrastructure as well," said Xiaolin Meng, "such as offshore wind turbines, masts, towers, dams, viaducts, and high-rise buildings."

Through the ARTES Integrated Applications Promotion (IAP) programme, ESA has been supporting a variety of infrastructure monitoring activities such as  GeoSHM. "We see tremendous potential for deploying space assets in a cost-effective way for this vital activity," said Beatrice Barresi, a telecom engineer overseeing the project for ESA. "The combination of long-term monitoring of ground levels using Earth Observation data and short-term GNSS positioning creates a potent information service."