The objectives of the SkyLiberty demonstration project are to develop, qualify and validate an end-to-end service centred around an aeronautical software application able to:

The SkyLiberty service users (and customers) belong primarily to the following two categories:

The preparation of a flight navigation is often quite long and difficult for pilots who have to find out all relevant information in order to perform a safe and efficient flight. The various information required to prepare and select the best flight route includes airspace status and activation, meteorological context, topography to name a few. Pilots will then confront these data to their type of license, experience and qualifications. Obviously, such a work is of course more complicated for low experienced private pilots than for confirmed professional pilots.

Nowadays, a lot of technologies have emerged in aeronautics such as geo-localization systems, smartphones and tablets, which bring a number of benefits (e.g. easy access to data, automated routing) to ease flight preparation. At the same time, such tools also come with potential hazards. For instance, pilots can rely too heavily on such navigation technologies, which for some of them, display ground speed (the speed of the aircraft related to the ground) instead of indicated airspeed (the speed of the aircraft in the air mass) which can stall the aircraft.

The SkyLiberty service also targets a second category of users including Aviation Training Organisations (ATOs) and flying clubs. Indeed, SkyLiberty offers as a service the possibility to track the position of any aircraft of the fleet in real time as well as to communicate with an inflight aircraft. This allows for instance to track student pilots during their mandatory solo navigations, better adjust aircraft bookings, and provide accurate statistical data about the aircraft utilisation (e.g. to plan maintenance slots for instance). 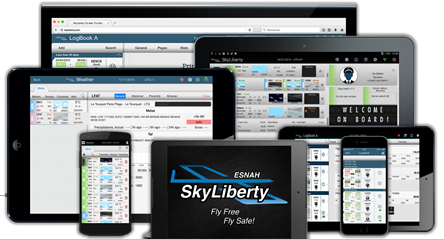 The application offers different services to the following five stakeholders:

➡   For pilots, several modules of the application can support the end-to-end management of each flight:

The modules are independent but can offer more functionalities when pilots buy several modules.

➡   For aircraft operators: ESNAH will provide a complete tool for aircraft fleet management and flight data analyses. The service will offer operators the possibility to anticipate maintenance and share important information concerning aircraft status and operability among pilots.

➡   For aviation institutions: the SkyLiberty web interface is a connecting tool between the flight safety manager of a flight school and national institutions (for instance for handling pilot anonymous incident reports). 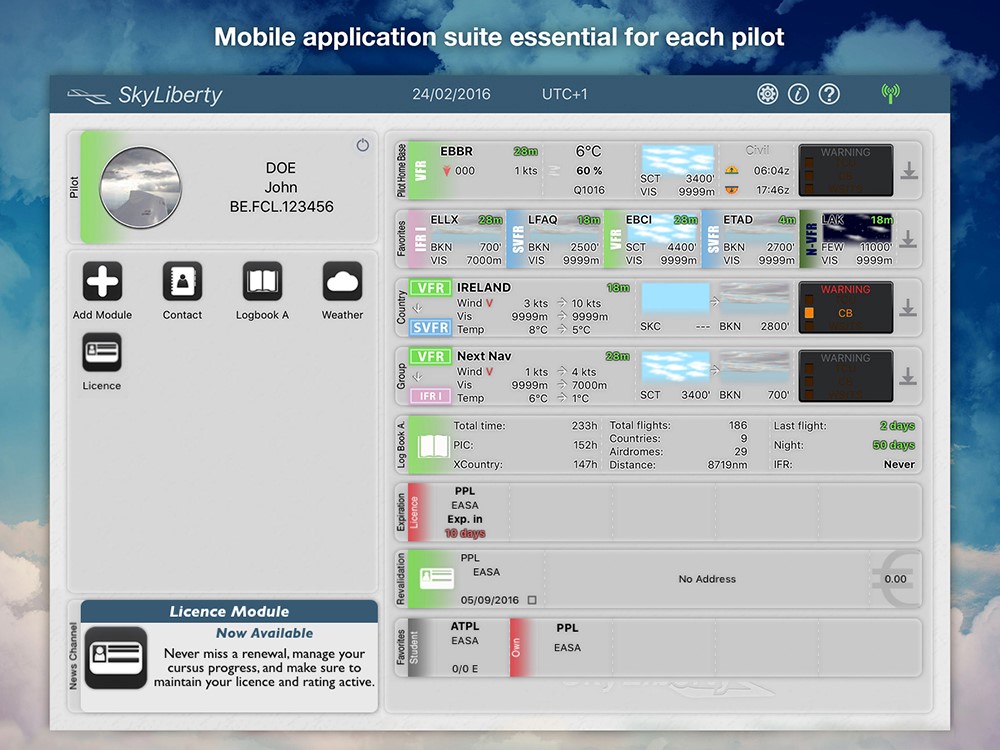 The supporting electronic device (SkyLink), is extending the SkyLiberty software solution and allows: 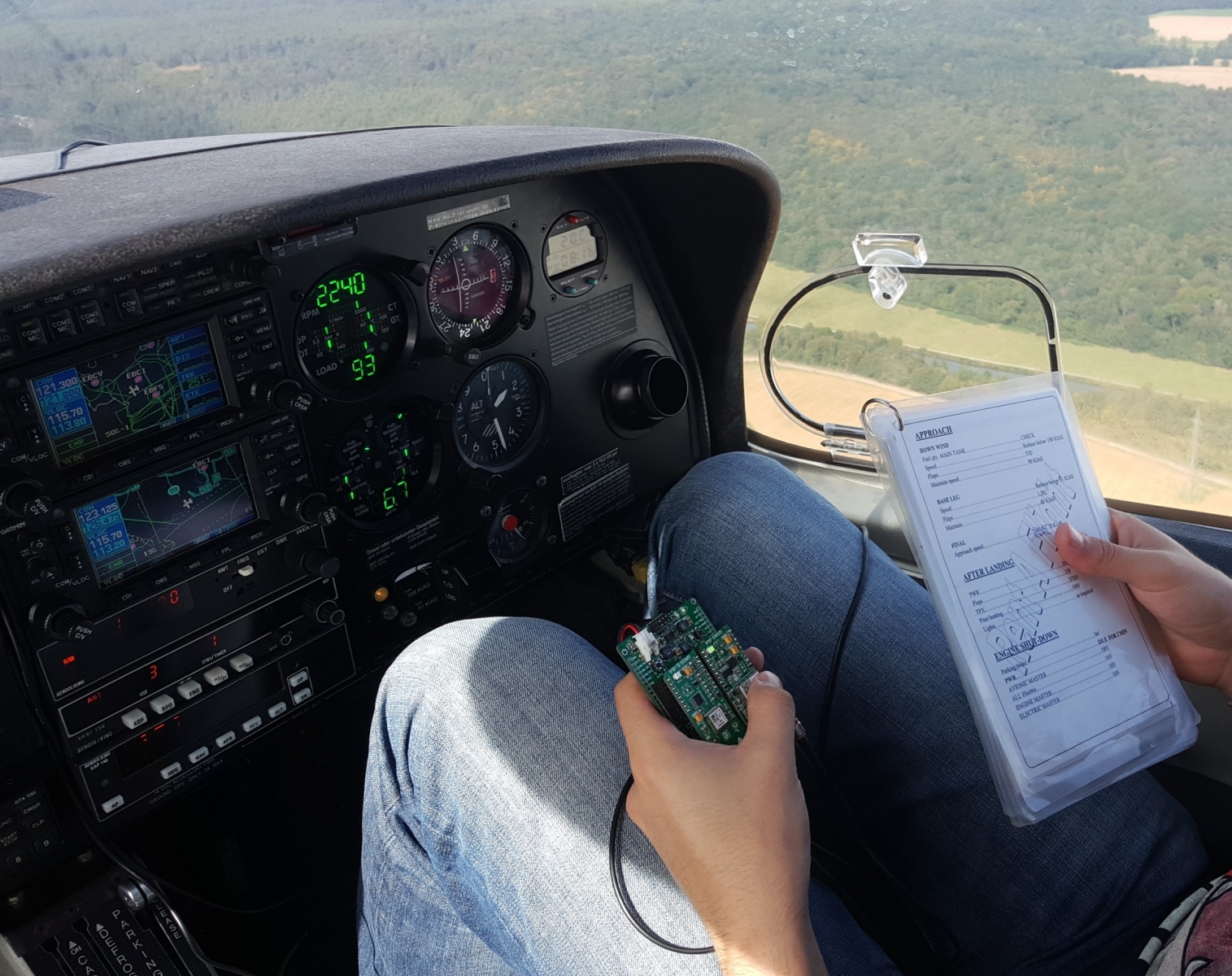 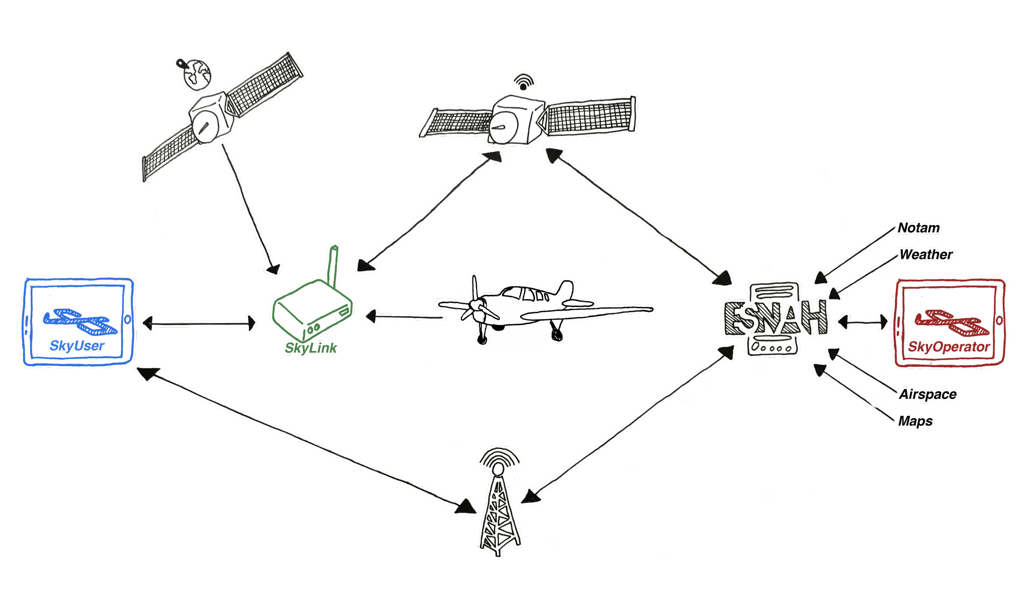 ➡   Above 2000 feet, the GPRS network is not available for pilots who can therefore no longer obtain real-time data during the flight. SkyLiberty offers to use Satellite communication to allow internet connection and share real-time information according to the services proposed.

Weather satellite imagery provide pilots with a clear visualisation of the enroute weather which is the most dangerous environmental factor during the flight.

The Final Review meeting was successfully held on 25 May 2018 and marked the end of the SkyLiberty demonstration project.

The trials performed during the project demonstrated that the installation and the utilisation of the SkyLiberty application and its associated services by an aircraft operator for the booking, monitoring and management of a fleet of light airplanes was very smooth and effective. Based on the user feedback collected, ESNAH stabilized and improved the applications and after almost 2 months of intensive use, all these users declared to be very satisfied with the services offered. The community of pilots using SkyLiberty is increasing every day. On the Final review day, SkyLiberty had already more than 1000 users.

This positive commitment of the operator and feedback from pilots has allowed ESNAH to move further and start the integration of the SkyLink device into the dashboard of the planes and its connection to the primary bus bar and the avionic bus bar.

Although originally developed to meet aviation needs, the flexibility of SkyLiberty has allowed to expand to other areas, such as the maritime environment for boat tracking (IAP Profumo project) or the domain of food transportation.